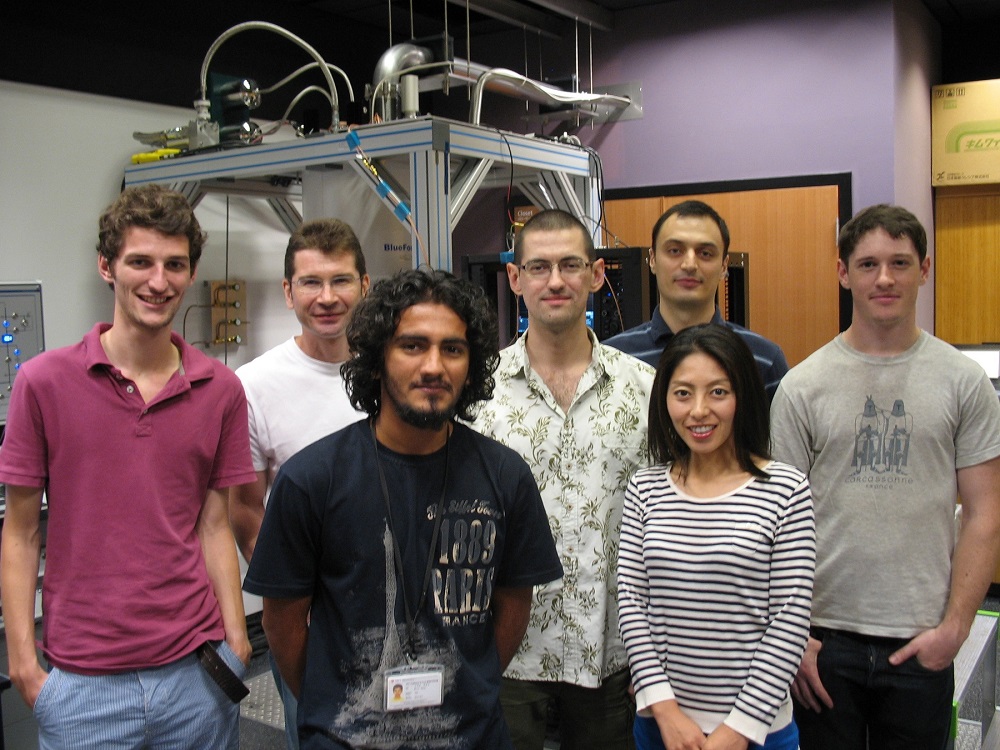 In June 2012, the Quantum Dynamics Unit moved to the newly established Cryogenic Lab located in Lab 2 Bldg. After installation of a cryogen-free dilution fridge, we successfully started low temperature experiments with two-dimensional electrons on liquid helium surface at temperatures down to 10 milli-Kelvin and in high magnetic fields. Several important finding were made concerning dynamics of the electron system under microwave irradiation. Also, in the same fridge we have set up a new experiment to study non-linear Nuclear Magnetic Resonance in antiferromagnets.
We continued collaborative work on microwave-excited electrons with research groups in Japan and UK, which resulted in two publications in the Journal of the Physical Society of Japan. One of these publications was rewarded as “JPSJ Paper of Editor’s Choice”.

We observed an ultra-strong photovoltaic effect induced by resonant inter-subband absorption of microwaves in 2D electrons on liquid helium. The effect emerges in the regime of microwave-induced zero-resistance states and is characterized by a non-equilibrium spatial distribution of electrons in the confining electrostatic potential. Remarkably, the electrostatic energy acquired by an electron exceeds other relevant energies by many orders of magnitude.

Understanding of the mechanism of this ultra-strong photovoltaic effect should help us solving the long-standing mystery of radiation-induced zero-resistance states (see http://jpsj.ipap.jp/news/jpsj-nc_113.html ). 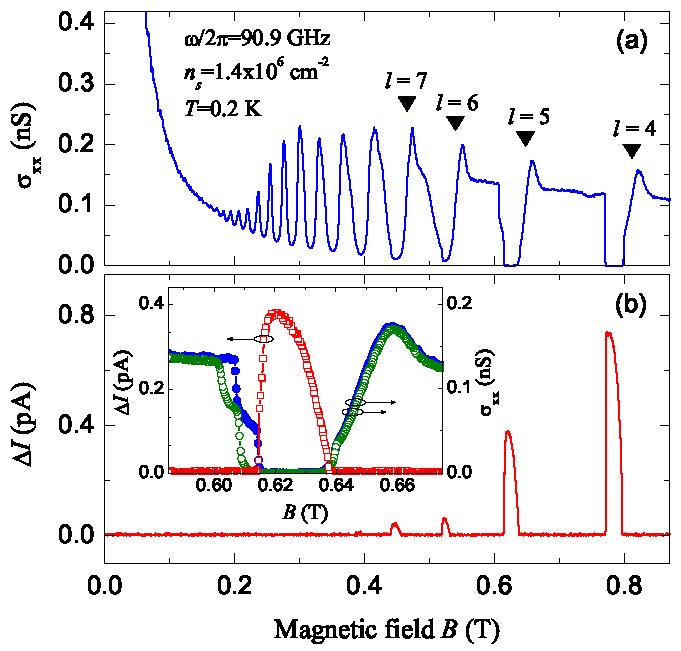 The beauty of a system of electrons on helium is that it allows an easy control of many experimental parameters. For example, we can easily tune inter-subband transitions of electrons in resonance with applied microwaves by adjusting an external electric field (a quantum effect known as the Stark shift). We employed this technique to study the effects of resonant conditions at the edge and in the bulk of the system by designing an experimental cell with a set of electrodes placed above and below the electron system (see Fig. 2 top). We found out that an ultra-strong photovoltaic effect appears when resonance is excited only at the edge of the electron system, and is absent even when electrons are excited everywhere in the bulk (see Fig. 2 bottom). This finding provides important hint to the mechanism of photovoltaic effect and zero-resistance states. There is ongoing theoretical investigation of this effect, which requires further experimental studies. 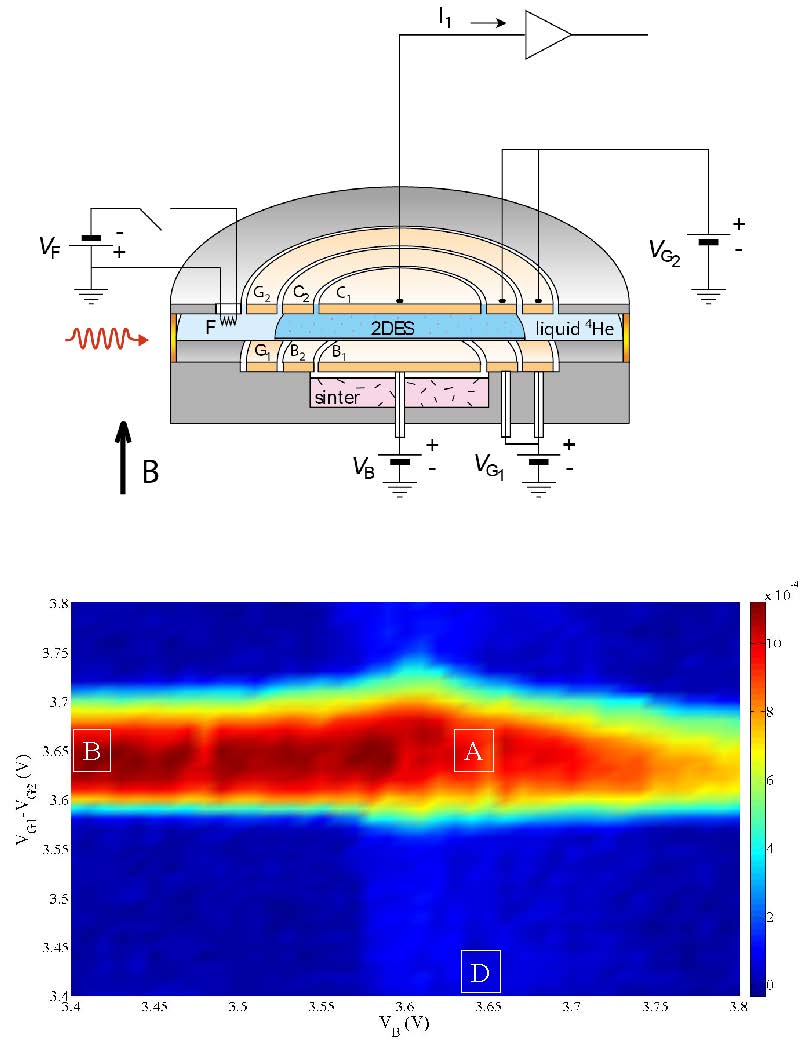 Figure 2: Experimental setup to study 2D electrons on helium under irradiation (top) and photo-current measured at different voltages applied to electrodes (bottom). Strong photo-current observed in regions A and B corresponding to resonant conditions at the edge of the electron system. The photo-current is absent in region D, where electrons are tuned in resonance everywhere in the bulk of the system but tuned away from the resonance at the edge.

In addition to inter-subband resonance, we have started the study the dynamics of surface electrons on helium subject to the cyclotron resonance. In particular, we focused on the transient response of the system to switching the cyclotron resonance excitation on and off. Our key finding is the excitation induced spatial electron density redistribution, which has been revealed by detecting the synchronous flow of image charge from surrounding electrodes (Fig. 1 left). Two components can be distinguished in the redistribution signal (Fig. 1 right): the out-of-plane component, indicating rising of electrons from the helium surface and occupation of quasi-3D states, and the in-plane component, indicating movement of electrons towards the boundaries of the confinement area against the applied electric field. The out-of-plane redistribution presumably originates from the heating-induced occupation of higher surface subbands. The in-plane redistribution remarkably resembles the density redistribution observed under inter-subband resonance excitation (see 3.1). Its mechanism is currently under investigation.

Figure 3: On the left: schematic view of the experiment. While pulsed 19 GHz excitation, applied to one of electrodes, induces cyclotron resonance, the image charge flow from three of other electrodes is simultaneously detected and recorded. On the right: the recordings of the observed redistribution signals. Fast rise (drop) of signal at the bottom (top) electrode indicated by red arrow corresponds to rising of electrons above the surface and occupation of quasy-3D states.

3.4 First study of Microwave Absorption in Electrons on Helium Under Quantizing Magnetic Fields (in collaboration with Prof. Kono, RIKEN)

We carried out the first measurements of inter-subband absorption of microwaves in surface electrons on liquid helium subjected to strong perpendicular magnetic fields. The dynamics of microwave-excited electrons is analyzed by considering the quantum transitions between different Landau levels of the ground subband and the first excited subband induced by microwaves and due to scattering from ripples on the helium surface (ripplons). We observed saturation of microwave absorption due to suppression of excite-electron decay when elastic scattering from ripplons is forbidden. To the best of our knowledge, this is the first observation of long-sought absorption saturation in this system.

3.5 Preparations for experiments to study spin-waves in antifferomagnets with strong hyperfine coupling (N. Desai and in collaboration with Prof. Bunkov, Institute Neel, CNRS)

In addition to studies of two-dimensional electrons on helium, we made necessary preparations for new experiments to study non-linear NMR in antifferomagnets with Shul-Nakamura type interaction between nuclear magnetic moments. Such interaction, mediated by electron-spin waves, arises in a number of antoferromagnets (e.g. MnCO3, CsMnF3, RbMnF3) due to strong hyperfine interaction. The coupled nuclear-electron precession modes results in a non-linear NMR with interesting properties. In particular, there is a predication of so called Bose-Einstein Condensation of coupled nuclear spin waves, when all nuclear moments precess coherently in space and time.

To observe this macroscopic quantum effect, we plan to carry out NMR studies of the above antiferromagnets at temperatures below 1 K. To start these experiments, we have built a superconducting magnet capable of producing magnetic field up to 1.2 Tesla. The magnet works at currents up to 6 Amp without need to be emerged into liquid helium. This is very important for our cryogen-free refrigerator, which does not use a bath of liquid helium as ordinary wet systems do. All necessary tests of the magnet were carried out in vacuum at temperatures of about 4 K at the 4 K plate of our refrigerator confirming that this unique device is ready for the experiments (see Fig. 5). 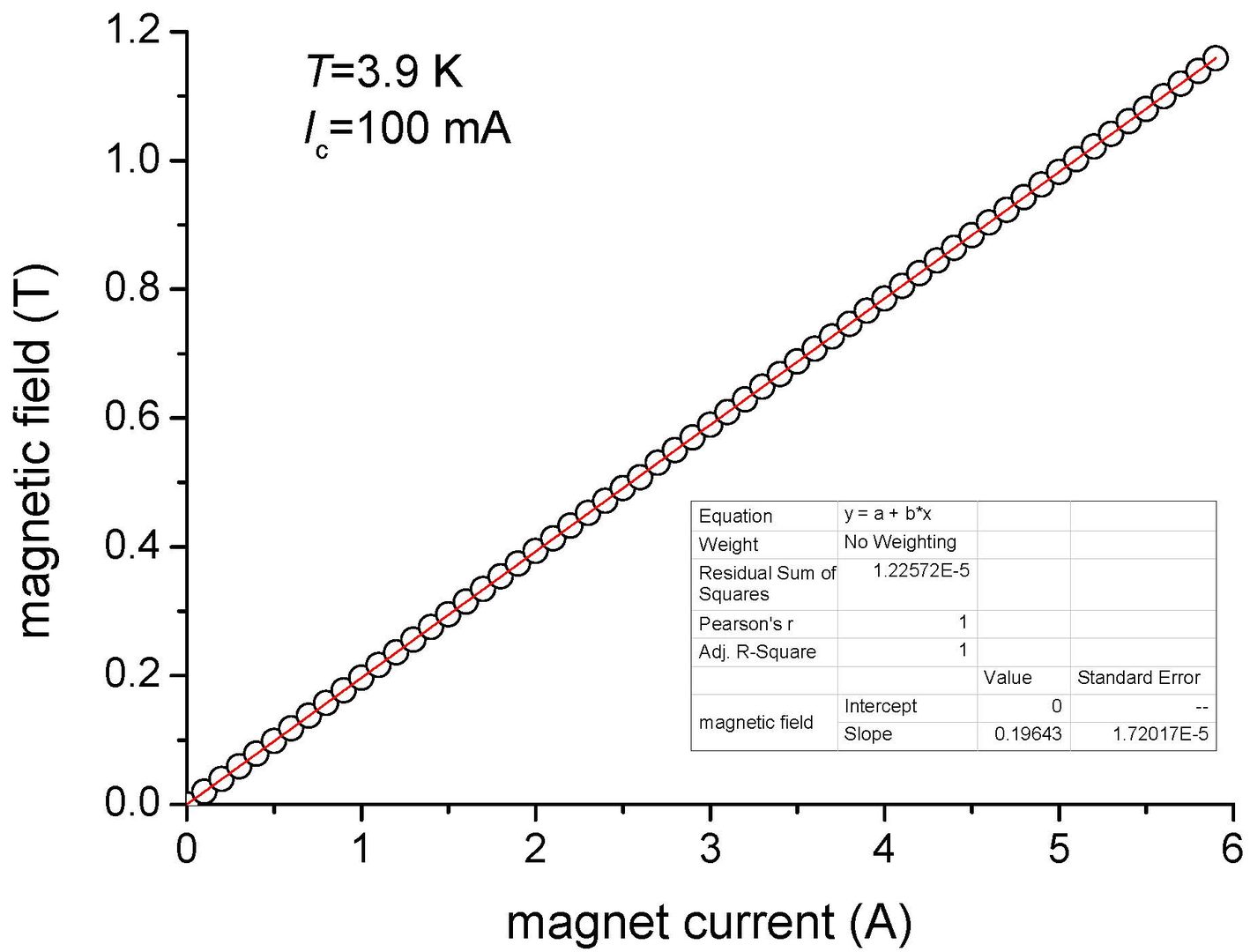 Figure 5: Calibration curve of the home-made superconducting magnet taken using the Hall probe at T=3.9 K in a cryogen-free cryostate.

3.6 Modeling a device for detection of single electrons on helium (C. Reinke and Dr. Badrutdinov)

We have designed a device, which is expected to allow isolation and detection of single electrons on the surface of liquid helium-4. The device consists of two electron reservoirs separated by a tunable constriction. The constriction is defined by applying dc voltages to a guard electrode and several gate electrodes (Fig. 6 left). The configuration of electrodes allows creation of a potential well in the middle of the constriction area (Fig. 6 right), where a few electrons can be confined. Due to Coulomb interaction, confined electrons prevent electrons from reservoirs from passing the constriction area. Thus, the presence of confined electrons can be detected by measuring an ac electric current through the constriction, which we can do using a capacitive coupling method employed in our previous experiments. Numerical analysis using the finite element method indicates that the effect of a single confined electron on the electron transport through the constriction should be strong enough to be resolved above thermal noise. Fabrication of the working device is currently in progress.