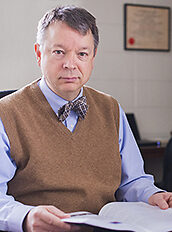 Mathematics, Mechanics, and Materials Unit (Fried Unit) would like to invite you to a Seminar by Prof. A. Jeffrey Giacomin, Chemical Engineering, Queen's University, Canada.

Abstract:
In 1935, Andrew Gemant conceived of the complex viscosity, a rheological material function measured by "jiggling" an elastic liquid in oscillatory shear [Rheol. Acta, 51, 481 (2012)].  This test reveals information about both the viscous and elastic properties of the liquid, and about how these properties depend on frequency.  The test gained popularity with chemists when John Ferry perfected instruments for measuring both the real and imaginary parts of the complex viscosity [“Ferry 1912-2002 …,” Mem. Trib., NAE, 17, 96-101 (2013)].  In 1958, Cox and Merz discovered that the steady shear viscosity curve was easily deduced from the magnitude of the complex viscosity, and today small-amplitude oscillatory shear is the single most popular rheological property measurement.
With oscillatory shear, we can control two things: the frequency (Deborah number) and the shear rate amplitude (Weissenberg number).  When the shear rate amplitude is large, the elastic liquids respond with a shear stress over a series of odd-multiples of the test frequency.  In this lecture we will explore how this shear stress response is measured, and we will examine both continuum (corotational models [JNNFM, 166, 1081 (2011); Phys Fluids, 29, 043101 (2017)]) and molecular (rigid dumbbells) approaches to interpreting oscillatory shear measurements, of amplitudes both large and small.  We consider these models to be the simplest relevant continuum and molecular models.  We will also explore the normal stress response [Rheol Acta, 50, 741 (2011)], and the fluid temperature rise [I&ECR, 52, 2008 (2013)] in large-amplitude oscillatory shear flow.
Analytical solutions for shear stress in large-amplitude oscillatory shear flow (LAOS), for continuum or molecular models, often take the form of truncated power series in the shear rate amplitude.  Our most recent work, uses Padé approximants to replace these truncated series with simple accurate expressions [Nihon Reoroji Gakkaishi, 45, 000000 (2017)].
We have recently equipped the rheology laboratory at Queen’s with a new rheometer for work on LAOS incorporating cone-plate partitioning for simultaneous shear stress and normal stress difference measurement, including modules for rheodielectrometry, rheomicroscopy and light scattering.

Bio:
Dr. Giacomin is Professor of Chemical Engineering and of Mechanical and Materials Engineering at Queen’s University at Kingston in Canada where he holds the title of Tier 1 Canada Research Chair in Rheology.  Born in Kingston, Professor Giacomin graduated high school on the island of Montreal.  He earned his bachelor’s and master’s degrees in Chemical Engineering from Queen’s University in Kingston, before joining the Research Division at DuPont Canada.  He then earned a PhD in Chemical Engineering from McGill University under Professor John Dealy, his thesis titled “A Sliding Plate Melt Rheometer Incorporating a Shear Stress Transducer.”  He joined the Mechanical Engineering faculty at Texas A&M University.  He has been Professor of Mechanical Engineering at the University of Wisconsin, where for twenty years he chaired its Rheology Research Center.  He has held visiting professorships at McGill University, the University of Sherbrooke, the Swiss Federal Institute of Technology, the Paris School of Mines, the National University of Singapore, Chung Yuan University near Taipei, Yunlin University, in southern Taiwan, and Shandong University in mainland China.  He married Marie, and they have a son David, and daughter, Caroline.  David is a civil engineer, and Caroline, a chemical engineer.  He speaks English, French and some Mandarin Chinese.  His hobbies:  Chinese characters, expert witnessing for products liability and patent litigation, and his passions are cycling and ice hockey.  He is President of the Canadian Society of Rheology, and a former President of The Society of Rheology.  Giacomin serves as sole Editor-in-Chief of Physics of Fluids.