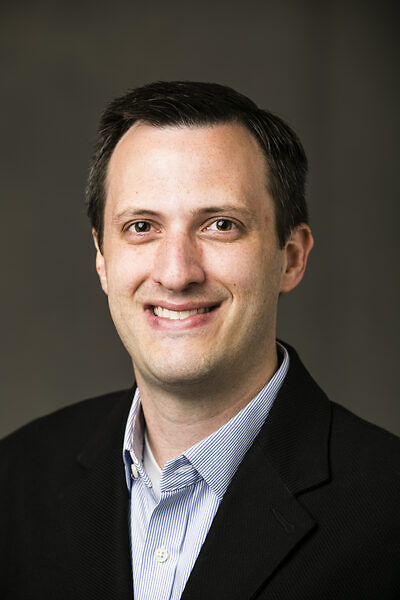 Micro/Bio/Nanofluidics (Shen) Unit would like to invite you to the virtual seminar by Prof. Jeffrey Guasto on December 21 (Monday).

Disorder, dispersion, and chaos in viscoelastic flows through porous media

Viscoelastic flows through microstructured geometries transition from steady to time dependent and chaotic dynamics under critical flow conditions. However, the implications of geometric disorder for flow stability and the resulting transport properties of these systems are largely unknown. We measure the onset of spatiotemporal velocity fluctuations for a viscoelastic flow through microfluidic pillar arrays. Disorder is controlled by randomly perturbing pillar locations away from hexagonal lattice sites. Strikingly, we find that increasing the degree of disorder delays the onset and eventually suppresses the transition to chaos. We show that disorder introduces preferential flow paths that promote shear over extensional deformation and enhance flow stability by locally reducing polymer stretching. We also demonstrate through both experiment and simulation that the emergent flow paths enhance longitudinal dispersion in disordered media. A novel Lagrangian analysis is used to visualize material stretching manifolds, which strongly correlate with polymer stress and appear to regulate preferential flow path topology.

Dr. Jeffrey S. Guasto is an associate professor in the Department of Mechanical Engineering at Tufts University. He received both a B.S. in Mechanical Engineering and a B.S. in Physics from Lehigh University in 2003. Subsequently, Prof. Guasto earned his Sc.M. and Ph.D. in Mechanical Engineering from Brown University in 2008, where he studied interfacial colloidal dynamics and fluid slip in microfluidic channels. He was a postdoctoral research associate in the Physics Department at Haverford College from 2008 to 2010 and later, a postdoc in the Department of Civil and Environmental Engineering at MIT from 2010 to 2013, where he developed an interest in the bio-fluid dynamics and transport of swimming cells. Prof. Guasto has been a member of the faculty at Tufts University since 2013, where he also holds an adjunct appointment in the Department of Physics and Astronomy. He teaches courses on fluid mechanics, transport, thermodynamics, and microfluidics. His current research interests are focused on the transport of swimming cells and active matter, flagellar mechanics, porous media and complex fluid flows, and microfluidics. In 2016, Prof. Guasto received a prestigious National Science Foundation CAREER Award for his work elucidating the transport of swimming cells in complex environments.