This year the group focussed on work related to nanofibre-mediated nonlinear optics in cold atomic systems, particle trapping at the nanoscale and sensing using whispering gallery resonators.   Amongst the major outputs were a proposal for atom trapping based on a nanostructured optical microfibre, the first demonstration of the interaction of higher order optical fibre modes with cold atoms, a demonstration of the Autler-Townes effect in an atomic system for ultralow powers, a model and demonstratioin of optical binding for micron sized particles next to optical nanofibres and the demonstration of nonlinear effects in a variety of whispering gallery resonators.

We present an evanescent field-based device which can confine low refractive index contrast nanoscale particles using modest optical powers (< 1.2 mW) with additional applications in the field of cold atom trapping. We currently focus on using a nanostructured ultrathin optical fibre to trap 100 and 200 nm, low index contrast, fluorescent particles within the structured region, thereby overcoming diffraction limitations. We hope to analyse the trapping potential of this device both experimentally and theoretically, and determine the trap characteristics through analysis of the transmitted laser beam. We have demonstrated the fabrication of such devices with high resolution, as well as some early results showing the trapping of 100 nm polystyrene particles. 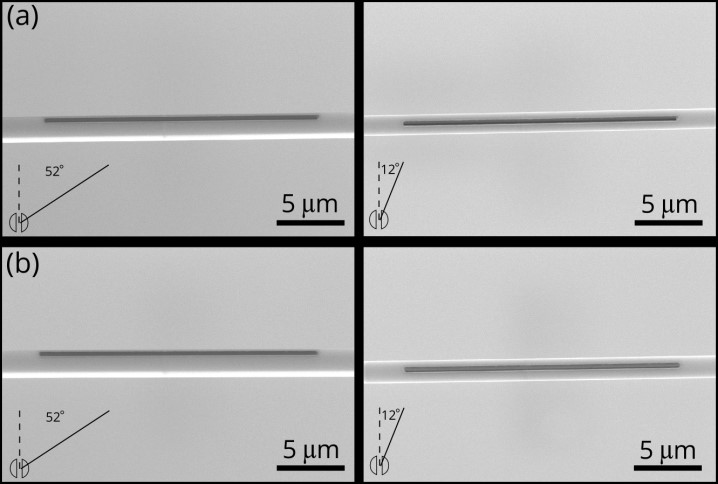 Figure 2. Still images taken from a video showing the trapping of 200 nm particles using a total power of 30 mW.

We demonstrated propulsion of particles in the evanescent field of fundamental and first group of higher order modes. Using a microfiber/optical tweezers compact system, specific number of particles are trapped and propelled in the evanescent field of an ultrathin fibre. The dependence of the particles’ speeds on their diameter is studied for 1 μm, 3 μm, and 5 μm diameter polystyrene particles using the higher order modes of the fibres.  The optical propelling velocity of a single, 3 μm polystyrene particle was found to be 8 times faster under the higher order mode than the fundamental mode field for a waist power of 25 mW. These results highlight the special properties of higher order modes, such as their larger evanescent field amplitudes and longer evanescent field extensions from the fibre’s surface, when compared to what can be achieved for FM propagation. Experimental data are supported by theoretical calculations. This work can be extended to trapping and manipulation of laser-cooled atoms with potential for quantum networks.

In this work, we demonstrated a tunable plasmonic nanodevice which can improve both the trapping field enhancement and detection of nano-objects using singular phase drops in the NIR range. The plasmonic nanodevice consists of an array of nanoring structures connected by slots 50 nm x 50 nm dimensions. These slots act as individual detection and trapping sites. The tunability of the system is achieved by increasing the inner disk size inside of nano-holes. We report experimental evidence of 100 nm polystyrene beads trapping using low incident power on these devices. 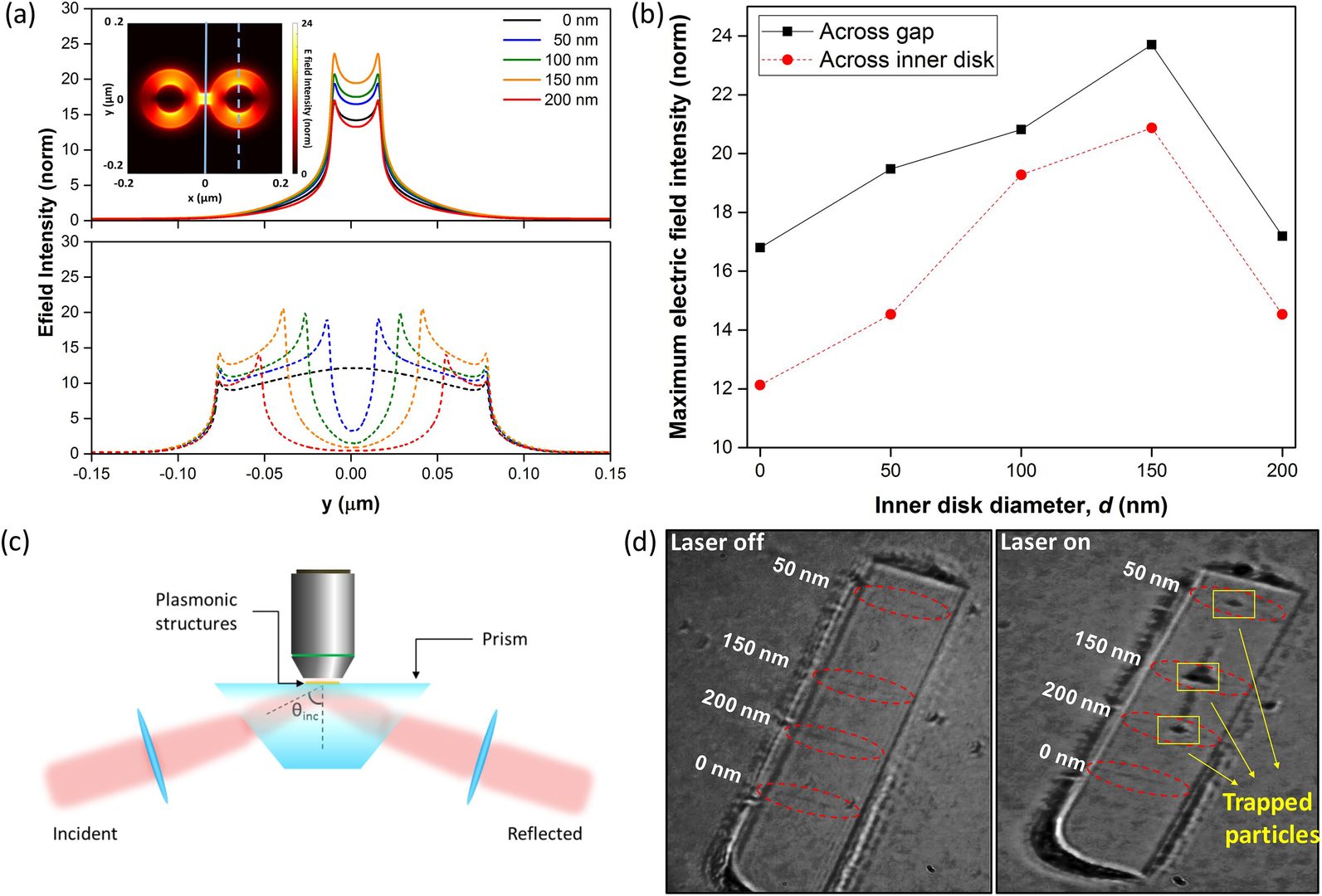 Figure 3. Electric field distribution perpendicular to (a) the trapping gap (solid) and to the left inner disk (dashed). (b) Maximum electric field intensity values taken from (a). The inset shows the axis along which the calculations were made. (c) Schematic of the Kretschmann configuration used to experimentally excite the devices. (d) Device fabricated with different inner disk sizes, d, as viewed under a 20X microscope objective (left). Laser source tuned at λ= 950 nm and incident angle θinc = 63°. Polystyrene particles with diameter 100 nm are quickly confined in the arrays with the 150 nm array accumulating a larger number of particles.

In 2015 the Whispering Gallery Resonator Group within the Light-Matter Interactions Unit have continued to work with microcavities for sensing, optomechanics and nonlinear optics.

The tunability of an optical cavity is an essential requirement for many areas of research. We used the Pound–Drever–Hall technique to lock a laser to a whispering gallery mode (WGM) of a microbubble resonator, to show that linear tuning of the WGM, and the corresponding locked laser, display almost zero hysteresis, see Fig. 1. By applying aerostatic pressure to the interior surface of the microbubble resonator, optical mode shift rates of around 58 GHz/MPa are achieved. The system can measure pressure with a detection limit of 2 × 10−4 MPa, which is an improvement made on pressure sensing using this device. The long-term frequency stability of this tuning method for different input pressures is measured. The frequency noise of the WGM measured over 10 min for an input pressure of 0.5 MPa had a maximum standard deviation of 36 MHz.

Coupled-mode-induced transparency was realized in a single microbubble whispering-gallery mode resonator. Using aerostatic tuning, we find that the pressure-induced shifting rates are different for different radial order modes, see Fig. 2. A finite element simulation considering both the strain and stress effects shows a GHz/bar difference, and this was confirmed by experiments. A transparency spectrum was obtained through precise pressure tuning. The resulting line shapes were fitted with theory. This work lays a foundation for future applications in microbubble sensing.

Dissipative optomechanics has some advantages in cooling compared to the conventional dispersion dominated systems. We studied the optical response of a cantilever-like, silica, microsphere pendulum, evanescently coupled to a fiber taper. In a whispering gallery mode resonator, the cavity mode and motion of the pendulum result in both dispersive and dissipative optomechanical interactions. This unique mechanism leads to an experimentally observable, asymmetric response function of the transduction spectrum, which can be explained using coupled-mode theory, see Fig. 3.

Fig. 3. (Left): Schematic of a taper-coupled micropendulum system. Inset: image of the micropendulum; (b) Fourier transform spectrum of the transmitted signal through the fiber taper as the pendulum moves relative to the fiber. (c) dissipative and (d) dispersive modulation. (e) A typical transduction response to cavity detuning for the 1 kHz mechanical mode peak. (Right): Coupled mode theory with experimental results, red squares (dotted blue) are the experimental data for the peak amplitudes of the maximum transduction for red(blue) detuning of the optical mode. Red(Blue) curve was obtained from coupled mode theory.

The fabrication of an ultrahigh-quality-factor, bottle-like microresonator from a microcapillary and the realisation of Raman lasing therein at pump wavelengths of 1.55 µm and 780 nm was achieved in 2015. The dependence of the Raman laser threshold on the mode volume was investigated. The mode volume of the fundamental bottle mode was calculated and compared with that of a microsphere. Third-order cascaded Raman lasing was observed under pumping at 780 nm, see Fig. 4. A hollow, bottle-like microresonator (BLMR) was fabricated from a microcapillary with a nearly parabolic profile. From simulations at 1.55 μm the fundamental bottle mode is shown to be in the anomalous dispersion regime, while the conventional whispering gallery mode, confined to the center of the BLMR, is in the normal dispersion regime. We have experimentally shown that, for a BLMR with a diameter of 102 µm, degenerate four-wave mixing can only be observed by judicious selection of the tapered fiber coupling position.

Sensors based on whispering gallery resonators have minute footprints and can push achievable sensitivities and resolutions to their limits. Here, we use a microbubble resonator, with a wall thickness of 500 nm and an intrinsic Q-factor of 107 in the telecommunications C-band, to investigate aerostatic pressure sensing via stress and strain of the material. The microbubble is made using two counter-propagating CO2 laser beams focused onto a microcapillary. The measured sensitivity is 19 GHz/bar at 1.55 μm. We show that this can be further improved to 38 GHz/bar when tested at the 780 nm wavelength range. In this case, the resolution for pressure sensing can reach 0.17 mbar with a Q-factor higher than 5 × 10^7, see Fig. 5.

Flow sensing using the concept of a hot whispering gallery microlaser was also demonstrated in 2016. Silica microcapillaries or microbubbles, coated with a layer of erbium:ytterbium (Er:Yb) doped phosphate laser glass, result in a hollow, microbottle-shaped laser geometry. The Er:Yb doped glass outer layer was pumped at 980 nm via a tapered optical fiber and whispering gallery mode lasing was recorded at 1535 nm. When gas passes through the capillary, the WGMs shift toward shorter wavelengths due to the cooling effect of the fluid flow. In this way, thermal tuning of the lasing modes over 70 GHz can be achieved. Gas flow rates were calibrated against a commercial mass flow sensor, see Fig. 6.

Fig. 6. (Left): Lasing spectrum from an Er:Yb doped bottle-shaped resonator on a silica capillary. Inset: Image of the resonator showing a WGM which is visible due to the green upconversion fluorescence (Right): Shift of the 1535 nm lasing WGM as a function of the measured flow rate for different pump powers. The solid lines are fits to the experimental data.

Ultrathin optical fibres integrated into cold atom setups are proving to be ideal building blocks for atom-photon hybrid quantum networks. Such optical nanofibres (ONFs) can be used for the demonstration of nonlinear optics and quantum interference phenomena in atomic media. We observed multilevel cascaded electromagnetically induced transparency (EIT) using an optical nanofibre embedded into a cloud of cold 87Rb atoms. Intense evanescent fields at the ONF allows us observe the effect with ultralow pump powers. The corresponding Rabi frequencies and EIT linewidths are calculated. Finally, the phenomenon is used to demonstrate an all optical switch. 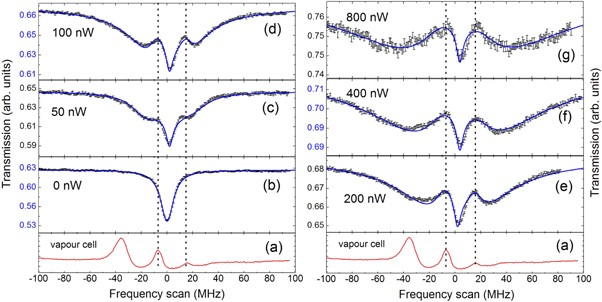 Figure 1: Multiple EIT peaks for coupling beam powers from 0–800 nW as indicated on the graphs. The probe power is 5 pW. The reference signal obtained in a vapour cell (red curves) is used for frequency calibration. 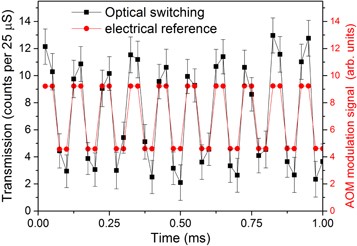 Figure 2: All optical switch demonstrated using the ONF based EIT. Black: photon counts obtained with 10 kHz on–off modulation of the coupling beam in the presence of cold atoms with background counts subtracted. Red: electrical reference signal used for switching on and off the coupling beam. The data is averaged for 150 runs.

We also used an optical nanofibre embedded in a cloud of laser-cooled Rb-87 for near-infrared frequency up-conversion via a resonant two-photon process. Sub-nW powers of the two-photon radiation, at 780 and 776 nm, copropagate through the optical nanofiber and the generation of 420 nm photons is observed. A measurement of the Autler-Townes splitting provides a direct measurement of the Rabi frequency of the 780 nm transition. Through this method, dephasings of the system can be studied. In this work, the optical nanofibre was used as an excitation and detection tool simultaneously, and it highlights some of the advantages of using fully fibred systems for nonlinear optics with atoms.