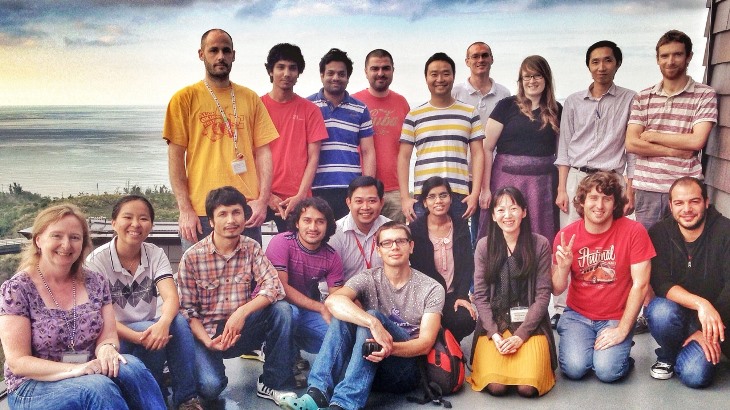 We are interested in studying the interaction between light and matter in a number of regimes, including cold atomic systems for advances in the development of quantum-based technologies, whispering gallery mode microresonators for sensing and optomechanics, and optical trapping of biologically relevant specimens. Our primary focus is to gain a better understanding of the processes involved through experiments and to use this knowledge for the manipulation and trapping of micron and submicron particles using light fields. A common technique across our work is the use of optical nanofibres as the interface tool between the light source and the sample under investigation.

Monitoring and manipulation of matter down to the atomic level can be achieved within the confines of a rectangular slot located at the waist region of a silica optical micro/nanoﬁbre [Figures 1 (a) and (b)]. When the fundamental mode of the unmodified region of the fibre meets the slot interface, the mode evolves into different modes which propagate along the upper and lower half of this slot waveguide-like region. The high confinement of the modes in this area produces an intense near-field within the slot thus allowing the trapping of atoms or nanoparticles both inside and outside the slot area. This results in several advantages over existing fibre-based traps, where the objects are trapped outside the ﬁbre only. For example, in the case of atoms, the geometry can be adjusted to allow high atom-cavity coupling, and, for particles, propulsion and manipulation down to the nanoscale is possible. Figures 1 (a) and (b) show a schematic of such a slotted nanofibre. Figure 1(c) presents the theoretical calculation of a potential created for laser-cooled rubidium atoms, in the slot region of the micro/nanofibre via the use of blue- and red-detuned beams, with respect to the 85Rb cooling transitions. Results indicate that, for rubidium atoms, trap depths of 4 mK, coherence times of the order of 10 ms and trap lifetimes of approximately 100 s could be accessible using modest input powers. This scheme facilitates optical coupling between the atoms and the nanoﬁbre that could be exploited for quantum communication schemes using ensembles of laser-cooled atoms.

3.1.2. Higher order mode propagation in optical nanofibres and nanostructured nanoﬁbres for atom/nano-particle trapping
Based on our recent results, both theoretical and experimental, on the controlled generation of higher order modes in nanofibres [Opt. Commun.  285, 4648, (2012)], we investigated the capability to create and precisely control dielectric particles with different trapping geometries around a nanofibre using these TE01, TM01 and HE21 higher order modes. Through the interactions of the higher modes, complex 3D potentials can be created around, or even inside, a standard or structured micro/nanofibre. The purpose of this work was to generate 3D structured trapping sites to investigate molecular motions of cells, atos trapping, and simultaneous trapping and sorting of multiple micro- and nanoparticles in complex systems. Preliminary work related to the structured micro/nanofibre suggests that atom traps using the interaction of higher order modes in the blue-detuned regime can create such potentials.

During FY2013, new experimental results were produced in whispering gallery mode optomechanics. The mechanism of micropendulum optomechanics properties were studied in depth.  The micropendulum is a microsphere with a long thin flexible stem which supports ultra-high optical Q factors. Mechanically it is a cantilever-like oscillator so that it behaves just like a pendulum for its fundamental mode. In earlier work [Phys. Rev. A 85, 053820 (2012)], we have experimentally shown that the mechanical oscillation can be transduced into the optical transmission spectrum so that it can be detected by observing the Fourier transform of the transmission. The detuning of the laser to the WGM mode decides the amplitude of the transduced signal. When the laser is on the red side of the WGM, the signal seems to be amplified, while it is suppressed if it is on the blue side. It was believed that it was due to the thermal effect of the micropendulum; however, in FY2013, a new experiment was conducted to prove its origin using a new theoretical framework based on coupled mode theory (see Figure 2).   This work was presented at CLEO 2014, USA. 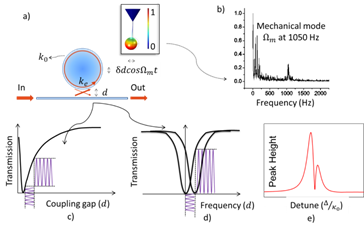 Figure 2: a) The principle of micropendulum coupled to a tapered fibre.  The mechanical motion of the pendulum is transduced to optical transmission as b) shows.  c) and d) are dissipative and dispersive mechanisms for such transduction. As a combination of both mechanisms, the opto-mechanical response to optical detuning gives an asymmetric curve shown as e).

We designed the experiment shown as Figure 3.  A tunable 1550 nm laser source was coupled into the tapered fibre. The taper was evanescently coupled with the pendulum sphere by a 3D nanopositioner. The transmitted light through the pendulum’s microsphere was detected by a high gain photo detector and Fourier transformed (FT) on a digital oscilloscope. Note that the laser source was attenuated to a power of less than 100 nW to avoid the thermally induced dispersion.

Figure 3:  (left) Experimental setup showing the micropendulum coupled to the tapered fibre. (right) The FT peak heights are recorded when the laser is scanned through an optical mode.

In FY2012, we set up a microbubble fabrication system that can control the geometrical parameters of microbubbles made, with high optical Q factors (see Figure 4).  By FY2013, both theoretical and experimental results developed further from it.   We have discussed in detail what parameters are to be pursued for high resolution sensing. To achieve high sensing capability, the microbubble should be operated in the quasi-droplet regime. A definition of the quasi-droplet regime based on the effective refractive index is discussed. Using this definition and together with an accurate quality factor calculation by a finite element method (FEM), optimized resolution is obtained for refractive index (RI) and nanoparticle sensing applications. Published in Opt. Exp. 22, 6881 (2014). 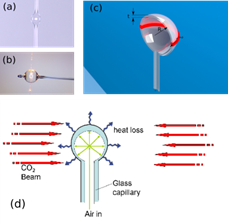 Figure 4: a) Double-pass and b) single-pass microbubbles.  c) is the geometric structure of the microbubble.
d) CO2 laser fabrication method.

When the microbubble is filled with liquid (e. g. water), for a thin shell, the microbubble is more influenced by the liquid core than the silica shell. In this case, it might behave like a liquid microsphere, i.e. it is in the quasi-droplet regime. We used two different ways to describe it (Figure 5).

Experimentally, the thermal shift rate was determined for different WGMS when the core of a microbubble was filled with air, water, and then ethanol. The experimental set is shown below. 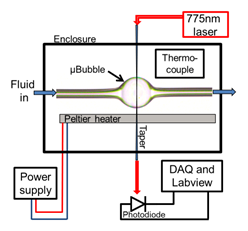 Figure 6: The microbubble temperature is controlled using a Peltier heater.

Laser light at a wavelength of 775 nm from a mode-hop-free, tunable laser was coupled into the microbubble using a tapered optical fiber with a diameter ~ 1 μm and the WGMs were excited by scanning the laser over 80 GHz. The whole setup was placed inside an enclosure to remove external disturbances. To create thermal shifting of the WGMs, a large Peltier heating element was placed directly underneath the microbubble. The temperature in the vicinity of the microbubble was measured using a thermocouple. By controlling the current to the Peltier heater the temperature was increased in 0.1 K steps. The WGM frequency position was recorded continuously. The air-filled bubble was shifted over a larger temperature range.  Sensitivities as high as 100 GHz/K (0.2 nm/K at wavelength of 775 nm) were observed when the microbubble core was filled with ethanol. This was the largest thermal shift rate reported for a WGM resonator. Q-factors for the higher order modes were typically 105, equivalent to a measurement resolution of 8.5 mK.  This work was published in IEEE Phot. Tech. Lett. 25, 2350 (2013).

Optical nanofibres, being very high-aspect ratio linear structures, represent a promising platform for mesoscopic particle manipulation and sorting, including biological applications. However, precise particle control and introduction of the particles to the fibre represents a challenge in these geometries. To address this problem we developed an experimental platform based on an optical tweezers setup, to precisely deposit prearranged sets of particles onto an optical nanofibre, thus facilitating experiments.

Figure 6: Left - schematic of forces in optical binding; Right - force as a function of the number of bound particles in a chain.

On this platform, we demonstrated organized propulsion of particle arrays, indicating optical binding, and performed both numerical and experimental study of this phenomenon on the transmitting optical nanofiber (see Fig. 7).  The reason for a non-uniform particle grouping during propagation was elucidated with the help of numerical simulation in COMSOL Multiphysics package. Those results contribute to the ongoing study of optical binding and its applications for cell sorting.

3.5 Experiments on laser-cooled atoms with higher-order modes of an optical nanofibre 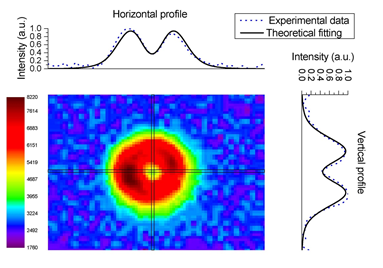 Fig. 8: Intensity of the light collected by a CCD camera at one output of the nanofibre when the trapping beams of the magneto-optical trap being coupled to the nanofiber through its waist. Horizontal and vertical profiles are fitted using a combination of the first higher and the fundamental modes in free space which indicates significantly higher coupling in the higher modes.

Title: Nanoplasmonics: Reaching Out to the Single Molecule