We are interested in studying the interaction between light and matter in a number of regimes, including cold atomic systems for advances in the development of quantum-based technologies, whispering gallery mode microresonators for sensing and optomechanics, and optical trapping of biologically relevant specimens.  Our primary focus is to gain a better understanding of the processes involved through experiments and to use this knowledge for the manipulation and trapping of micron and submicron particles using light fields. A common technique across our work is the use of optical nanofibers as the interface tool between the light source and the sample under investigation.

We relocated to OIST Graduate University on the 1st October 2012 from University College Cork, Ireland.

The selective excitation of higher order modes, i.e. modes other than the fundamental, in the waist region of a tapered optical nanofiber has been investigated. The LP11 mode is excited in a few mode fiber by coupling a free space Laguerre Gaussian beam to the fiber. The few mode fiber used is chosen based on its core cladding ratio which allows adiabatic propagation of the LP11 mode.  The LP11 mode excites the TE, TM and HE21 modes in the waist region. By monitoring the power transmitted through the waist region of the fiber throughout the tapering process the extinction of the HE21 mode has been observed at a certain fiber diameter as a drop in transmission through the fiber (Fig. 1 (a)). By terminating the pulling process just after the extinction of the HE21 a fiber that only allows the TE and TM modes to propagate for a certain wavelength can be fabricated. These results have interesting implications for possible atom trapping experiments using the evanescent field of the nano-fiber. For example, a variation on the red/blue dipole trapping method is possible in which a fiber diameter can be chosen such that the red detuned light can excite the TE and TM with the HE21 while the blue detuned light can excite the TE, TM and HE21.

Figure 1: (a) CCD camera plot showing the evolution of the LP11 mode during tapering of 80mm fiber, at 0.62 mm/s. The drops in intensity correspond to the loss of the modes indicated in the figure. (b) A possible atom trapping potential formed in the evanescent field of a 430nm radius fiber with 1064 nm wavelength TE and TM modes and 700nm wavelength TE, TM and HE21 modes. The figure shows the potential as a function of azimutlal position at a distance of 150 nm from the fiber surface. The fraction of power in the blue detuned beam that propagates in the HE21 mode is indicated.

3.2.1. Opto-mechanical experimental platform
Besides the taper-microcavity coupling system we had from before, a brand new setup for optomechanics is being built and has been shown to work.  This is the first time the Light-Matter Interactions Unit has the capability to do research on this frontier topic since we moved to OIST.  A whispering gallery mode (WGM) cavity can contain high intensity photons inside the cavity due to its ultrahigh Q-factor. The photons travelling in the cavity are reflected back off the surface by total internal reflection, which will generate a radiation pressure force on the cavity boundary. Meanwhile, the boundary of the microcavity also oscillates due to thermal fluctuations and material elastic properties. This mechanical oscillation changes the cavity mode and modulates the photons that travel inside. Eventually, the optical modes are coupled with mechanical motion, which, in the language of quantum physics , is a  photon-phonon interaction.  In order to investigate this interaction, an experimental platform with a homodyne detection scheme has been realized. We tested it with a microsphere resonator made by melting an optical fiber tip. A high sensitive displacement measurement of the boundary oscillation is done by recording the electrical beat note of the transmitted signal from tapered fiber (See Fig. 2).

Figure 2 Left: The scheme of a homodyne detection setup for measuring the mechanical spectrum of a microresonator.  Right: The experimental curve is the noise spectrum of a 40 μm diameter microsphere. The peak at 90.2 MHz is the radial breathing mode of this microsphere and the inset is the corresponding vibration shapes from COMSOL simulation.

The success of measuring the mechanical modulation of WGMs shows that our setup can guarantee high precision for research on opto-mechanical systems. We are one step towards implementing a light-matter interface via photon-phonon interaction.

Figure 3  Left:  A disk pattern on PMMA by EBL under microscope. The diameter of the disk is 4μm.  Right: Straight waveguide structure by EBL on PMMA. The width of the line is 100nm.

We obtained full experience and parameters to generate designed patterns on photoresist with up to 100 nm precision. Now we are ready for the next step of fabrication for integrated photonic circuits once the ICP is fully functioning.

The integration of a tapered (or nano) optical fiber into a cloud of laser-cooled atoms (Fig. 4) provides a unique and non-destructive technique to probe and manipulate those atoms as never before, allowing internal characteristics of the cold atom cloud to be directly observed and exciting prospects such as novel trapping geometries for cold atoms to be explored.  Two techniques can be used to probe the cloud using an optical nanofiber within the cold atom cloud and here we present work using both.

Firstly, by collecting fluorescence photons the number of atoms in close proximity to the nanofiber can be determined and using this the average temperature of the laser-cooled atoms has been determined.  This was achieved by briefly releasing the cloud from its trapped state, before recapturing it again.  During the release time the cloud expands ballistically and those atoms with enough energy, “hot enough”, escape the trapping region entirely. On reactivation of the trap only those atoms with a low enough temperature are recaptured.  From the fraction of recaptured atoms the average temperature of the cold atom cloud before measurement can then be determined.

The second technique is to pass a probe beam through the nanofiber, allowing the significant proportion of light guided within the evanescent field to interact with the surrounding atoms. Absorption of the correctly tuned probe light can then be detected.  For many experiments of this sort an optical dense medium surrounding the optical nanofiber would be beneficial, which is why we have operated a dark MOT around the nanofiber.  Using the higher optical densities it may be possible to observe non-linear effects such as 2-photon absorption or electromagnetically induced transparency. 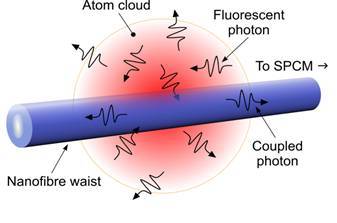 Figure 4: Schematic of the atom cloud overlapping the nanofibre, illustrating the coupling of fluorescence photons to the guided mode of the fibre.

Since arriving at OIST the Light Matter Interactions Unit has set up work stations for the fabrication of novel optical devices for optical sensing. Using a high power CO2 laser glass  fibre can be formed into microspherical optical resonators which trap light in tight orbits called whispering gallery modes. The optical modes can have unique properties which make them efficient optical probes for bio-sensing, chemical sensing and measuring many physical phenomena such force, pressure, temperature, electric/magnetic fields and refractive index just to name a few. Apart from the already well-established microspherical resonators we are now able to make a new type of whispering gallery optical cavity described as a microbubble resonator.  This device supports whispering gallery modes inside a thin spherical shell, the core of the bubble can be filled with various fluids thus enabling optical sensing in a quasi-droplet regime.  Our fabrication method allows us to make microbubbles with dimensions much smaller than previously reported (diameters less than 60 microns).  The microbubbles are made by heating a pressurised glass capillary in the focus of counter propagating CO2 laser beams. When the glass becomes soft the gas pressure pushes the walls out to form a microbubble shape, the wall thickness can be controlled by the amount laser power. Microbubbles with can be made where the wall thickness is down to a few hundred nanometers but can still support optical modes. A schematic of the fabrication method and examples of microbubbles made with this setup are shown in Fig. 5.

Figure 5 Left: Schematic of microbubble fabrication. A glass capillary is heated with a CO2 laser beam and then blown out by compressed air to make a thin shelled microbubble. Right: Two types of microbubble, one with a closed end and one with two openings which allows fluid to be passed through the core.

We developed a versatile system for microscopic particle optical manipulation with spectroscopic modalities, based on an optical tweezers setup. By the end of FY2012, the optical tweezers with multitrap capability was installed and tested. Furthermore, the necessary components for the fluorescence and lifetime spectroscopy of biological objects, which are to be installed in FY2013, have been purchased. Following the previously observed optical propulsion of particle chains by a nanofiber (Fig. 6 (a)), we performed numerical simulation of this process (Fig. 6 (b)) and implemented a nanofiber into the optical tweezers setup to study the propulsion phenomenon more accurately.

Figure 6:  (a) Chains of 3 µm particles trapped and propelled in the evanescent field of a nanofiber. (b) COMSOL simulation of field distribution and forces acting on particles for a finite chain arrangement.