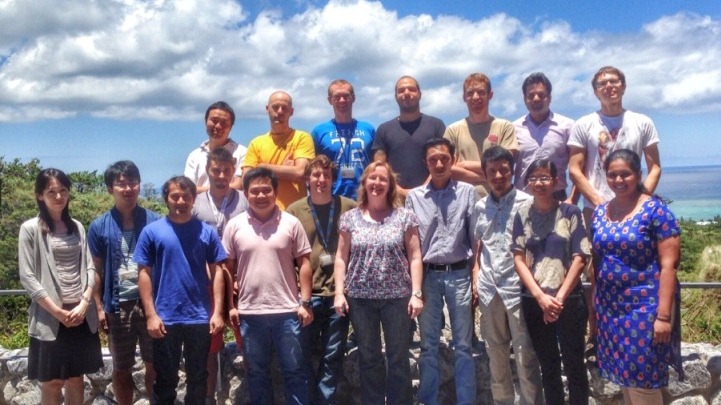 This year the group focussed on work related to particle trapping at the nanoscale, optical control of particles over a range of sizes and sensing using whispering gallery resonators.   Amongst the major outputs were a proposal for atom trapping based on nanostructured optical fibres, the first demonstration of higher order optical mode propagation in optical nanofibres and the interaction of such modes with cold atoms, a demonstration of the Autler-Townes effect in an atomic system for ultralow powers, a model and demonstratioin of optical binding for micron sized particles next to optical nanofibres and the demonstration of nonlinear effects in a variety of whispering gallery resonators.

Following  our previous results on the controlled generation of higher order modes in a micro- and nanofiber [Opt. Commun. 285, 4648, (2012), Rev. Sci. Instrum. 85, 111501 (2014)], we demonstrated in this work the capability to trap and propel particles based on the excitation of the first order of the higher order modes at the fibre waist. The propelling velocity of a 3 µm polystyrene particle were 8 times faster (as shown in Fig. 1) under the higher order mode (HOM) than the fundamental mode (FM) for a waist power of 25 mW. The hydrodynamic interaction between particles and fibre surface has also been investigated. We applied two correction factors (Faxen and Krishnan factors) of the hydrodynamic interaction effect to predict the particle speeds for the HOM and FM cases. Experimental data were supported by theoretical calculations.

Figure 1: Microgram of 3 µm polystyrene particle propulsion under (a) FM and (b) HOMs propagation for the waist power of 25 mW.The work can be applied for future trapping and control of laser-cooled atoms for quantum networks, to investigate molecular motions of cells and simultaneous trapping of multiple micro- and nanoparticles in complex systems.

In this work, we first investigated the optical properties of a hybrid gold nano-cavity disk and hole array design which demonstrates high plasmon resonances in the near-infrared regime (NIR). The enhancement in the NIR is in the biologically compatible part of the spectrum where low photo damage is desirable. The resonant modes of this hybrid design exhibit splitting to low and high energy modes caused by the electromagnetic interference between the disk and hole plasmons. We have characterized the design by calculating transmission spectra (Fig. 2a) and field distributions (Fig. 2b) for different array parameters using FDTD software. The Kretschmann configuration was then used to excite the plasmonics devices at a glass-water interface using evanescent fields. We preliminary demonstrated experimental results of trapped 100 nm polystyrene particles with this nano-plasmon array using a 950 nm laser source.   The results demonstrate the potential of this configuration to be used for direct trapping and manipulation of matter such as cells, proteins and molecules down to atomic levels for biological science applications. 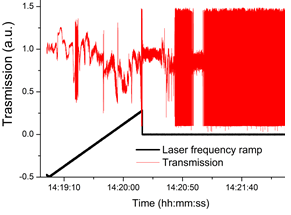 Fig. 1 Transmitted power from a PDMS microbubble when the pump laser is tuned near a WGM.  The modulated output is sustained for a number of minutes.

By compressing the air inside an empty microbubble resonator we were able to control the coupling between modes of different order and observe coupled mode induced transparency (Fig. 2). From this experiment it was realised that different order modes shift at different rates due the application of stress and strain. 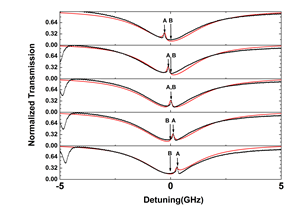 Using microbubbles with very thin walls can boost the interaction between the whispering gallery modes and the material in the core of the bubble. However ultra-thin walls induce optical loss and reduce the resolution of the sensor. We have shown that by careful fabrication it is possible can make microbubbles with 500 nm thick walls and still maintain Quality Factors close the theoretical limit even at long optical wavelengths around 1550 nm (Fig. 3).

Fig 3. (Left) A SEM of the microbubble snapped in the middle. The measured wall thickness varies from 563 nm down to 507 nm. (Right). Accurate Q factor calculated for different wall thickness by finite element method at 1550 nm. The red line is just for guiding of eyes.

For further improving the aerostatic pressure sensing capability, we filled the microbubble with acetone. It was found that the sensitivity was boosted by nearly 20% for a microbubble with a wall thickness of 1.3 μm. (Fig .4). This is due to the fact that elasto-optic coefficient of the liquid is 100 times higher than in the solid silica material. Such experiments show that by using the microbubble it is possible to measure the elasto-optic coefficient of the liquid. 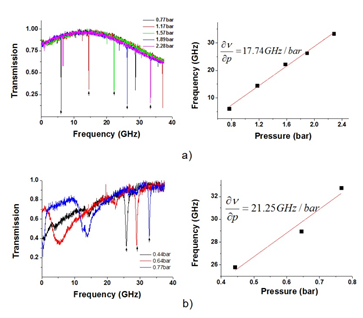 Fig .4 Pressure tuning sensitivity measurement for a microbubble when it is empty (upper) and filled with acetone (bottom).

The use of microcavities for the generation of non-linear optical effects has been studied for decades but it still remains an area of intense study. We have observed Raman lasing in a hollow micobottle resonator (Fig. 5) and are working on characterisation of four-wave mixing in such structures (Fig. 6). 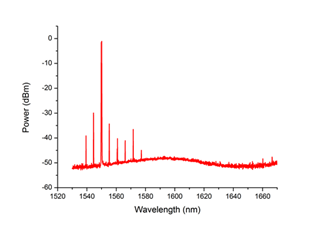 Fig. 6 Parametric oscillation via four-wave-mixing in the hollow microbottle. The free spectrum range of the frequency comb generated here is about 5.4 nm.

To further improve the non-linearity in the microcavities, highly non-linear materials are required. In collaboration with the Dublin Institute of Technology and the Optoelectronics Research Center (University of Southampton), we successfully fabricated microbubbles from highly non-linear lead silicate glass (Fig 7.).

Fig 6.  (Up) Single and double input lead silicate microbubble and their spectra (bottom).

In other work, our group has investigated the optomechanical interaction between the laser light in an optical waveguide and the optical modes in a free moving whispering gallery resonator. The nanoscale movement of the micocavity is transduced by the evanescent field of the waveguide. It was found that the amplitude of the transmitted signal depends on the detuning between the laser light and the whispering gallery mode resonance. The cause of this effect was found to be due to the interference between the dissipative and dispersive loss channels of the optical system. This observation is important for the study of centre of mass cooling of optical microcavities and optomechanical sensing.

Finally we have published two review articles, one discussing the fabrication of a tapered optical fiber pulling rigs and the other discussing the state of the art of hollow whispering gallery resonators.

Sub-wavelength size diameter of an optical nanofiber (ONF) provides significant portion of propagating light in the evanescent field region. Also tight confinement of the light gives high intensities even at low powers.  Atoms around the ONF experience this field and non-linear optics phenomena can be studied.  Here, we use an optical nanofiber embedded in a cloud of laser-cooled 87Rb for near-infrared frequency up-conversion via a resonant two-photon process. Sub-nW powers of the two-photon radiation, at 780 (ω1) and 776 nm (ω2), co-propagate through the optical nanofiber and the generation of 420 nm photons is observed. At tens of nWs of power, a clear Autler-Townes splitting is observed which provides a direct measurement of the Rabi frequency of the ω1 transition. With the slightly modified set-up we observed electromagnetically induced transparency where presence of ω2 beam makes ω1 light transparent at the resonant transitions.  We have also developed a laser operating at 482 nm and integrated it with the existing system in order to address the nonlinear interactions in highly excited cold atoms around the ONF. 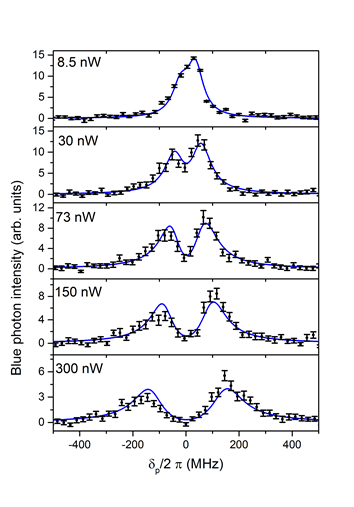