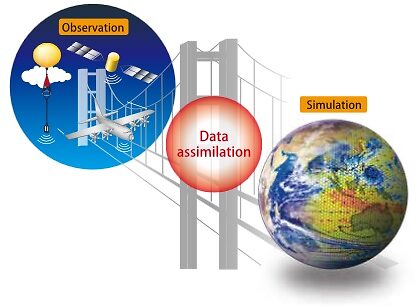 At RIKEN, we have been exploring a fusion of big data and big computation, and now with AI techniques and machine learning (ML). The new Japan’s flagship supercomputer “Fugaku” is designed to be efficient for both double-precision big simulations and reduced-precision ML applications, aiming to play a pivotal role in creating super-smart “Society 5.0.” Our group in RIKEN has been pushing the limits of numerical weather prediction (NWP) through two orders of magnitude bigger computations using the previous Japan’s flagship “K computer”. The efforts include ensemble Kalman filter experiments with 10240 ensemble members and 100-m-mesh, 30-second-update “Big Data Assimilation” (BDA) fully exploiting the big data from a novel Phased Array Weather Radar. In the summer of 2020, we achieved real-time BDA application in Tokyo and surrounding areas using the supercomputer Oakforest-PACS of the University of Tokyo and Tsukuba University. Now with the new Fugaku, we have been exploring ideas for fusing BDA and AI. The data produced by NWP models become bigger and moving around the data to other computers for ML may not be feasible. Having a next-generation computer like Fugaku, good for both big NWP computation and ML, may bring a breakthrough toward creating a new methodology of fusing data-driven (inductive) and process-driven (deductive) approaches in meteorology. This presentation will introduce the most recent results from data assimilation and NWP experiments, followed by perspectives toward future developments and challenges of DA-AI fusion.

Dr. Takemasa Miyoshi received B.S. (2000) from the Kyoto University, and M.S. (2004) and Ph.D. (2005) from the University of Maryland (UMD). Dr. Takemasa Miyoshi started his professional career as a civil servant at the Japan Meteorological Agency (JMA) in 2000. He was a tenure-track Assistant Professor at UMD in 2011. Since 2012, Dr. Miyoshi has been leading the Data Assimilation Research Team in RIKEN Center for Computational Science (R-CCS). Dr. Miyoshi's scientific achievements include more than 110 peer-reviewed publications and more than 130 invited conference presentations. Dr. Miyoshi has been recognized by several prestigious awards such as the Japan Geosciences Union Nishida Prize (2015), the Meteorological Society of Japan Award (2016) - the highest award of the society, the Yomiuri Gold Medal Prize (2018), and the Commendation by the Prime Minister for Disaster Prevention (2020).