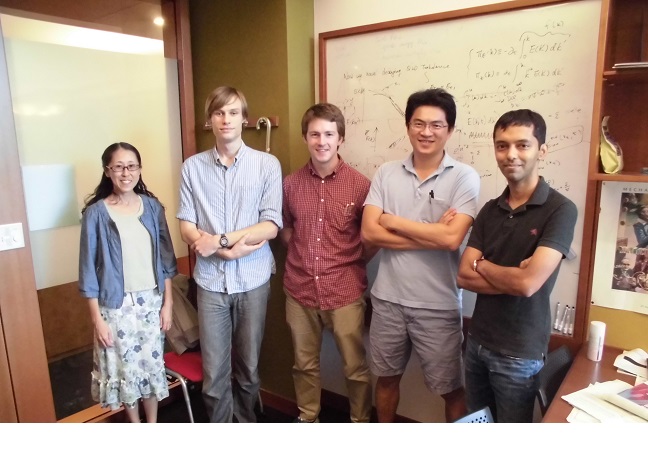 Many large-scale atmospheric and oceanic flows are decaying two dimensional turbulent flows embedded in a non-uniform mean flow. Despite its importance for large-scale weather systems, the influence of non-uniform mean flows on decaying 2D turbulence remains unknown. In the absence of any mean flow it is well known that decaying 2D turbulent flows partake in the enstrophy cascade. In this cascade, as is typical of all classical turbulent cascades, the longitudinal and transverse velocity fluctuations correspond to the same cascade, signifying isotropy. Indeed isotropy is a key concept that informs the phenomenological theory of 2D turbulence. To study the influence of non-uniform mean flow on decaying 2D turbulence we have performed experiments on turbulent soap films. We find that the flow transitions from the usual isotropic enstrophy cascade to a series of unusual and, to our knowledge, never before observed or predicted, anisotropic cascades where the longitudinal and transverse spectra are mutually independent and partake in different cascades. We are working on the implications of our results for decaying geophysical turbulence. 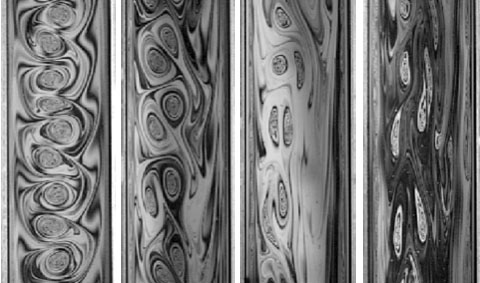 Figure: Mean flow--turbulence interaction in soap-film flows. The mean flow in each panel is from top to bottom; the panels from left to right show the progressive development of anisotropic turbulence.

There is a long standing mystery concerning friction drag in one of the simplest canonical wall-bounded flows: fully developed turbulent plane Couette flows.  Manifestly defying predictions from dimensional analysis, experiments have consistently shown that the frictional drag, f, is not a unique function of the Reynolds number, Re. In fact, the f vs. Re data fall on two disparate curves. The origin of these two curves dates back to the 1950s when Reichardt and Robertson independently performed their classical experiments. Subsequent works have found f vs. Re data to be in accord with the Reichardt curve or with the Robertson curve. While the disparity in the f vs. Re data are well known, we have identified an hitherto undetected attendant disparities in the mean velocity profile, in particular regarding the presence or absence of an overshooting wake. Based on the theory of spectral link we show that these disparities are but manifestations of the same underlying physics: the affect of finite-domain on the turbulent energy spectrum.

3.3 Physical origin of the classical laws of wall-bounded turbulent flows

Since the pioneering work of Prandtl and von Karman in the 1930s, the classic laws dictating the scaling of mean-velocity profiles (MVPs) in wall-bounded flows have been predicated solely on dimensional analysis and similarity assumptions that concern the MVPs in the limit of zero viscosity and infinite domain. In other words, the classic laws that govern the scaling of MVPs are based on assumptions that pertain to nothing else but the MVPs themselves. Building on two of our previous findings in the theory of wall turbulence---the spectral link and the spectral analogs---we mathematically derive these classic laws based on a cardinal attribute of turbulent flows that has no obvious ties with the MVPs: the turbulent energy spectrum. Based on the empirical property that viscosity and finite turbulent domains have a depressive effect on the turbulent energy spectrum, we evince the physical origin of the classic laws. Our work suggests that further physical insight into the MVPs and other phenomena of wall turbulence will be gained by exploiting the large corpus of available knowledge on the turbulent energy spectrum and the physics of turbulent fluctuations.

In previous work we have identified the effect of rainpower (power lost to friction in falling rain) on the intensity of a hurricane. By analyzing satellite data and by using the framework of a simple analytical model of hurricane energetics, we demonstrated that, contrary to the prevalent notion that rain helps drive hurricane winds, the general effect of rainpower is to lessen the steady-state hurricane intensity by 20% on average. Proceeding beyond the simple analytical model, we now incorporate rainpower in a state-of-the-art, time-dependent computational model, Cloud Model 1 (CM1). Our preliminary results suggest that rainpower triggers an inverse energy flux that effects in lessening of the steady-state hurricane intensity by 15% on average. Beyond the effect on steady-state intensity, we find that during the initial "rapid intensification" stage the hurricane intensities are increased by 50% on average.

We have continued experiments on granular cratering. Using high-speed imaging we are studying the development of distinctive morphology in the crater ejecta. To complement our experimental observations, we are conducting three-dimensional simulations of granular cratering using LIGGGHTS (LAMMPS Improved for General Granular and Granular Heat Transfer Simulations).

We have continued experiments on turbulent pipe flows. In laminar, transitional, and fully-developed turbulence regimes,
we are able to obtain accurate measurements of pressure drop (via pressure transducers) and of temporally and spatially resolved velocity field (via Stereoscopic Particle Image Velocimetry, S-PIV). Our experimental data is in excellent accord with benchmark data from state-of-the-art Direct Numerical Simulations.

We have continued development of a large Taylor-Couette experiment. With air as the working fluid we have measured the turbulent energy spectrum (via hot-wire anemometry). Our preliminary results suggest that multiple flow states, as discerned using the turbulent energy spectrum, can be triggered by movement of an intrusive probe, all the while keeping the phase-space parameters (such as cylinder angular velocity) constant. We have began work on modifying the setup to use water as the working fluid.

(2) Joint seminar on physics of typhoons; theory and simulations

(5) Title: Droplet impact on solid surfaces: the effect of air and vapor

(6) Title:  Pair dispersion in turbulence: The permanent and the irreversible