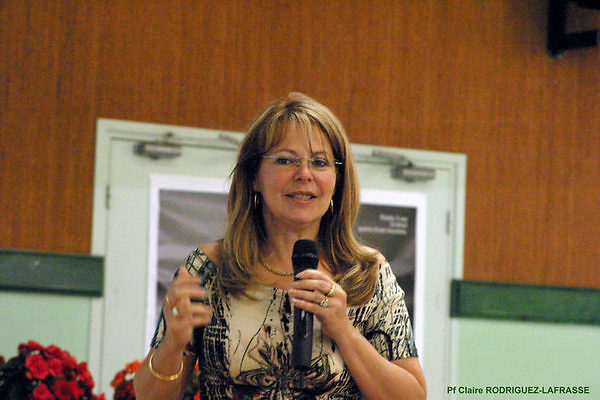 The Advanced Medical Instrumentation Unit and the Cancer Stem Cell Working Group (CSCWG) would like to invite you to two seminars given by Pr Claire Rodriguez-Lafrasse and Anne-Sophie Wozny from Lyon University.

Among the current innovations to treat radioresistant tumors, improvement of radiotherapy relies on either the delivery of a higher dose of radiation to the target volume by focused beams (3D conformational or intensity-modulated radiotherapy, hadrontherapy with protons or carbon ions…) while limiting their delivery to critical normal structures or the increase in the local effect of a given dose of radiation by radiosensitizing agents (metallic nanoparticles…). This presentation will summarize our current results with carbon ions and AGuIX® nanoparticles in different tumor models.

- Gene and chromosomal damage induced by carbon irradiation are so complex that they cannot be transmitted in the progeny of irradiated tumor cells, thus limiting genomic instability and improving local control. Chromosome/chromatid loss appears as a specific signature of carbon ion exposure in sensitive and resistant head and neck squamous cell carcinoma (HNSCC) cells (Hanot et al. Plos One, 2012). Furthermore, the response to carbon ions is independent of the telomeres’ size. The presence of long telomeres in tumor cells of patients with glioblastoma is a well-known factor of poor prognosis as they become more resistant to oxidative stress induced by conventional radiotherapy. Thus, our data first underlines that patients with long telomeres can advantageously benefit from carbon-therapy (Ferrandon et al., Mol Neurobiol, 2013).

- Cell death is triggered earlier and more significantly by carbon ions in HNSCC or glioblastoma cellular models. It involves either early apoptosis in radiosensitive cells or mitotic catastrophe followed by late apoptosis in radioresistant ones. Apoptosis is activated through a pathway independent of p53, but dependent on ceramide (a lipid signaling mediator) (Alphonse et al, BMC Cancer, 2013; Ferrandon et al., Cancer Letters, 2015), giving carbon ions a significant advantage since 50% of tumors have a mutated p53 gene.

- Carbon ions are more effective than photons in killing cancer stem cells (CSCs) in HNSCC (Bertrand et al., Stem Cell Rev, 2014). Furthermore, molecular connections between the stem-cell state and epithelio-mesenchymal transition program have recently emerged, pointing out a double danger for cancer patients since CSCs have the ability to renew indefinitely and are resistant to apoptosis. Our investigations point out a significant decrease in the migration and invasion of both parental and CSC populations irradiated with carbon ions, thus highlighting the great interest of carbontherapy in the prevention of recurrences and metastases (Moncharmont et al., Oncotarget 2016).

Hypoxia seems to have a key role in the self-renewal of CSCs (located in hypoxic niches), their stemness maintain, tumor angiogenesis, growth tumor and therapeutic resistance. The protein HIF-1α (Hypoxia-Inducible Factor 1α) is considered as the major transcriptional regulator of the cellular and developmental response to oxygen homeostasis. In hypoxic conditions, HIF-1α plays a central role in radioresistance (OER> 1.2) and the increased invasion and migration phenomenon activated by a photonic irradiation. Conversely, since carbon ions appear unable to stabilize HIF-1α in CSCs, there is neither resistance linked to the oxygen effect (OER = 1) nor activation of the migration and invasion pathways (Wozny et al., Br J Cancer, 2017).

AGuIX® (Activation and Guidance by Irradiation X) is a non-toxic gadolinium-based nanoparticle (GBNs) developed by the Lyon University. It accumulates in the tumor through the enhanced permeability and retention (EPR) effect and clears rapidly through the kidneys due to its small size (sub-5nm). We performed a proof of concept on HNSCC, metastatic melanoma and chondrosarcoma tumors, known for their low survival rates, demonstrating the radiosensitizing efficacy of the AGuIX® nanoparticles in cellular (2D and 3D cultures) and preclinical models.

The RBE in cancer cells is quite comparable to that observed in response to carbon ions, suggesting the existence of common mechanisms through the amplification of the local dose (Miladi et al., Nanomedicine 2015). The radioenhancing effect of AGuIX® was also observed when combined to carbon ion irradiation (Wozny et al., in revision).

The efficacy of AGuIX® has also been demonstrated in orthotopic xenograft models of HNSCC and metastatic melanoma (Miladi et al., 2015; Kotb et al., Theranostics 2016); the experiments are ongoing for chondrosarcoma. Regulatory toxicity studies were conducted in rats and monkeys and a first human clinical study is ongoing in patients with multiple brain metastases (clinicaltrial.gov).

Head-and-Neck-Squamous Cell Carcinoma (HNSCC) are resistant to standard treatments, partly due to Cancer Stem Cells (CSCs) localized in hypoxic niches. The protein HIF-1α (Hypoxia-Inducible Factor 1α) is considered as the major transcriptional regulator of the cellular response to oxygen homeostasis. Compared to X-rays, carbon ions relie on better ballistic properties, higher relative biological effectiveness and the absence of oxygen effect. HIF-1α is involved in the resistance to photons whereas its role in response to carbon ions remains unclear. My work aims at clarifying the role of HIF-1a in the response of CSCs to photon (250kV) and carbon ion (75Mev/n and 290Mev/µ) irradiations in normoxic or hypoxic (1% O2) conditions. For two HNSCC cell lines and their CSC subpopulation, in response to photons under hypoxia, an OER upper than 1.2 was associated with HIF-1α expression. This stabilization appears earlier in CSCs than in non-CSCs and is correlated with the variation of ROS levels, confirming the adaptive properties of CSCs to hypoxia. The diffuse ROS production by photons is concomitant with HIF-1α expression and essential to its activation. Compared with photons, the oxygen effect is canceled after carbon ion exposure (OER=1) and no stabilization of HIF-1α was observed in normoxia, probably due to the ROS localization in the track, insufficient to stabilize HIF-1α. Inhibition of HIF-1α with a siRNA leads to the decrease of HNSCC-CSC survival after both radiations in hypoxic conditions (OER<1). Furthermore, radiosensitization is associated with a significant increase of residual DSBs in response to both types of irradiations. Finally, CSCs migrate more and are more invasive than non-CSCs in normoxia and even more under hypoxia. Photon irradiation increases both process under normoxia whereas carbon ions decrease them significantly in normoxic and hypoxic conditions. The inhibition of HIF-1α, in response to both types of irradiations and particularly in hypoxic conditions, is associated with a low proportion of migrating and invasive cells, confirming the role of HIF-1α in the epithelio-mesenchymal transition. These results demonstrate that HIF-1a plays a key role in the response of CSCs and non-CSCs to photon and carbon ion irradiations. It participates to radioresistance by increasing cell survival, DNA repair and invasiveness and contributes to tumor escape. This makes the HIF-1α targeting an attractive therapeutic challenge.