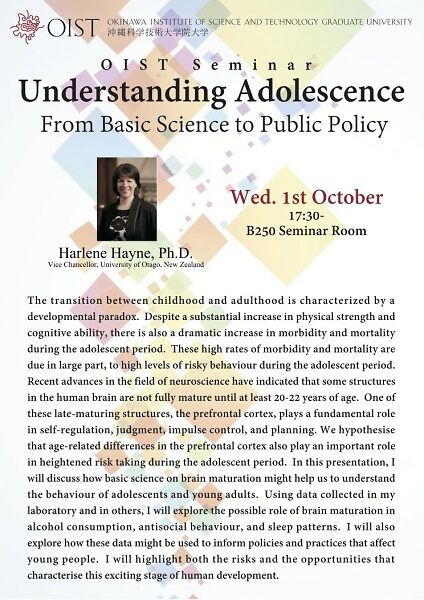 The transition between childhood and adulthood is characterized by a developmental paradox.  Despite a substantial increase in physical strength and cognitive ability, there is also a dramatic increase in morbidity and mortality during the adolescent period.  These high rates of morbidity and mortality are due in large part, to high levels of risky behaviour during the adolescent period.  Recent advances in the field of neuroscience have indicated that some structures in the human brain are not fully mature until at least 20-22 years of age.  One of these late-maturing structures, the prefrontal cortex, plays a fundamental role in self-regulation, judgment, impulse control, and planning. We hypothesise that age-related differences in the prefrontal cortex also play an important role in heightened risk taking during the adolescent period.  In this presentation, I will discuss how basic science on brain maturation might help us to understand the behaviour of adolescents and young adults.  Using data collected in my laboratory and in others, I will explore the possible role of brain maturation in alcohol consumption, antisocial behaviour, and sleep patterns.  I will also explore how these data might be used to inform policies and practices that affect young people.  I will highlight both the risks and the opportunities that characterise this exciting stage of human development.

Professor Harlene Hayne, ONZM, is the first woman Vice-Chancellor in New Zealand of Otago University. She was previously the former Head of the Psychology Department and Deputy Vice Chancellor, Research and Enterprise at Otago University.

She spent four years as a postdoctoral fellow at Princeton University before immigrating to New Zealand in 1992 to take up her first position at Otago as a Lecturer in the Psychology Department. Once here, she quickly established herself as a first-class teacher and researcher, becoming a Senior Lecturer in 1995, Associate Professor in 1999, full Professor with a Personal Chair in 2002 and then Head of the Department from 2006 to 2008. To date, she has published over 100 book chapters and journal articles and has supervised 20 PhD, 27 Masters, and more than 50 Undergraduate Honours theses to completion.

She has served on the Royal Society's Academy Council, the Marsden Fund Council, and the New Zealand National Science Panel. She is the Associate Editor of Psychological Review and of the New Zealand Journal of Psychology and she serves on the editorial boards of 5 additional international journals.