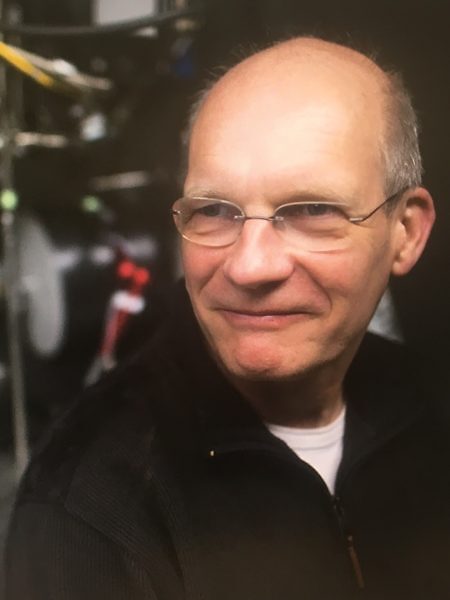 The ventromedial thalamus (VM) connects cerebellar and more prominently basal ganglia output to cerebral cortex, where it predominantly influences layer 1 structures.  We surveyed the behaviorally related activity of VM thalamus via calcium imaging of VM terminals in anterior-lateral premotor (ALM) cortex and via electrophysiological single unit recordings using silicon probes.  We also manipulated VM activity with optogenetic stimulation of basal ganglia input or direct excitation of VM terminals in ALM.   In my talk I will show how VM activity reflects movement preparation and movement initiation but not sensory processing.  Optogenetic manipulations show that it is causally involved in these processes.

I have been an electrophysiologist since 1985, when I started my PhD thesis involving recordings from the basal ganglia of awake trained monkeys. From the start, I was interested in correlated neuronal discharge, and for my thesis I devised a multiwire electrode to record from 2-5 basal ganglia neurons simultaneously. I extended the multisite approach of basal ganglia recordings to in vivo intracellular recordings in a collaboration with Charles Wilson, then at UT Memphis (1.). After attending a Woods Hole summer course in Computational neuroscience in 1986 I was enthralled by the detailed neural dynamics that can be studied with compartmental modeling.  As a postdoctoral fellow at Caltech with Jim Bower I my research then focused on modeling (2) as well as in vitro neural recordings.  In my own lab at Emory since 1997 we combine computer modeling with intracellular, extracellular, and local field potential recordings in rodents to address questions of synaptic integration and circuit function in basal ganglia and cerebellar circuits.  Notably, we found that during ketamine/xylazine anesthesia both basal ganglia and cerebellar circuits (3) participate in slow-wave oscillations and are functionally connected to cortex. In a 2007 paper now cited 142 times we were also the first to show antidromically mediated cortical effects of deep brain stimulation in the subthalamic nucleus (4).  In the past 4 years we have retooled the lab to work with trained awake behaving mice to extensively use optogenetics and to perform cortical voltage imaging studies.  We are now in strong position to undertake the work proposed in this grant, namely to unravel the influence of the basal ganglia – thalamo- cortical pathway on cortical processing.  I am very excited about this project.

1. R01NS067201 (Jaeger, PI)            09/01/2009 - 08/31/2015 NIH/NINDS, “CRCNS: Cerebellar cortico-nuclear interactions” This project examined cerebellar processing and synaptic integration at the level of the deep cerebellar nuclei. Computer simulations in the Jaeger lab were combined in this collaborative project with multiwire recordings from awake mice in Dr. Detlef Heck's lab at UT Memphis. 2. P50NS071669 (Wichmann, Center PI; Jaeger, project PI) 08/01/2010 - 07/31/2015 NIH/NINDS (Udall Center), “Project 1: Influence of basal ganglia output on the thalamus” This project examined the neuronal activity in the motor thalamus in mice, in the normal parkinsonian states. A focus lied in the determination of oscillatory and bursting activity patterns in motor thalamus. 3. R21NS074296 (Jaeger, PI)          03/01/2011 - 02/28/2013 NIH/NINDS, “Optogenetic investigation of olivary inputs to the deep cerebellar nuclei” In this project neurons in the inferior olive was made to express Channelrhodopsin-2. Optical stimulation of the inferior olivary axons in the cerebellar nuclei was be used to determine the excitatory effects of olivary input on the cerebellar nuclei.