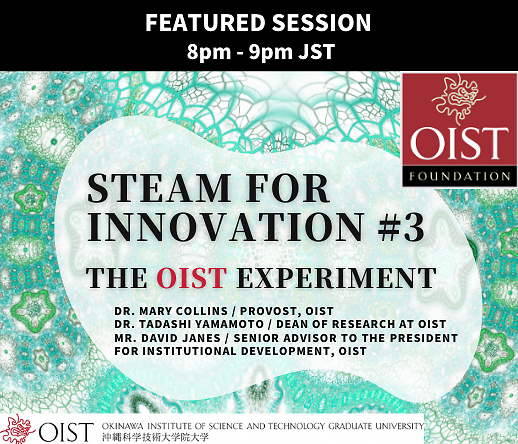 Zoom link will be provided upon registration

Considered by some to be on the periphery of Japan, how might Okinawa be reimagined as a new center for innovation and research on the world’s most cutting-edge topics? How might a global scientific institution that operates in English with faculty and students from over 50 countries foster more inclusion and global connections in Okinawa and throughout Japan? These questions and more will be discussed as we examine the creation, mission, and vision of the Okinawa Institute of Science and Technology Graduate University (OIST).

OIST was creatively constructed with the assistance of Nobel laureates from around the world and opened its doors in 2012. In a few short years it has gained global notoriety, including having been listed as the top institution in Japan for scientific research quality and number 9 globally. The University has also incubated new companies and is fostering an innovation ecosystem in Okinawa.

This is the third session of the three session series of STEAM for Innovation！You can see #1 (18th Feb):The Art of Science and Science of Art [ENG] and #2 (25th Feb)：STEAM教育の現状とその可能性 [JPN] sessions on YouTube!