The Imposter Syndrome - Why successful people often feel like frauds 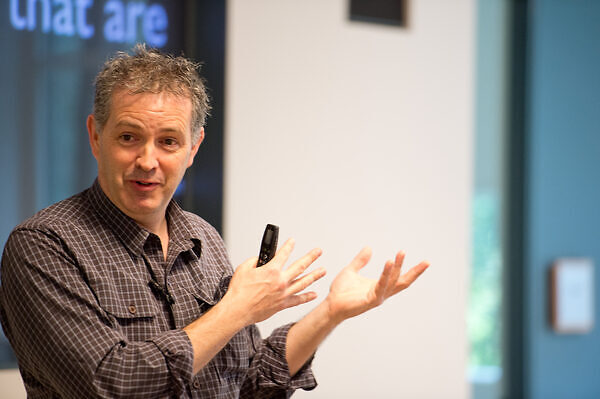 How can it be that so many clever, competent and capable people can feel that they are just one step away from being exposed as a complete fraud? Despite evidence that they are performing well they can still have that lurking fear that at any moment someone is going to tap them on the shoulder and say "We need to have a chat".

The session will explain why high performing people often doubt their abilities and find it hard to enjoy their successes. It will also show the links to perfectionism and self-handicapping strategies such as procrastination, avoidance and overcommitment.

At the end of this session you will:

Hugh Kearns is recognised internationally as a public speaker, educator and researcher. He regularly lectures at universities across the world and has recently returned from lecture tours of the UK and the US which included lectures at Oxford, Cambridge, Harvard, Berkeley and Stanford.

His areas of expertise include self-management, positive psychology, work-life balance, learning and creativity. He draws on over twenty five years of experience as a leading training and development professional within the corporate, financial, education and health sectors in Ireland, Scotland, North America, New Zealand and Australia. He has coached individuals, teams and executives in a wide range of organisations in the public and private sectors.

Hugh lectures and researches at Flinders University, Adelaide, Australia. He is widely recognised for his ability to take the latest research in psychology and education and apply it to high-performing people and groups. As a co-author with Maria Gardiner, he has published ten books which are in high demand both in Australia and internationally.  One of which is The Imposter Syndrome – why successful people often feel like frauds.