Integrated Open Systems Unit has made progress on development of tools to support multilevel biophysiological modeling, simulation, and analyzing dynamical systems. Also we have developed a pancreatic beta cell model, and several other models of physiological functions such as cardiac cells, neurons, and ionic channels.

2.6 Modeling of function of pancreatic beta cell and analysis for pancreatitis

2.7 Discovery of anti-influenza agents and drug

2.10 The sustainable living in the Hot-Humid Region

PhysioDesigner is a software that supports to create computable models of physiological systems with spatiotemporal multiple levels. Models built on PhysioDesigner are written in PHML format, which is an XML based specification taking over from ISML. We have rebranded ISML to PHML in December, 2011. In FY2015, we have released three versions of PhysioDesigner, i.e. ver. 1.3 (July, 2015), 1.3.1 (July, 2015), and 1.4 (February, 2016) at physiodesigner.org.

By the developments conducted in FY2015, time series integration into a mathematical model of physiological function became easier and more effective. Besides, a function to model discrete state transitions was implemented. Using this function, users can develop a model of, for example, open/close state model of ionic channels.

Multiplatform support of PhysioDesigner is one of merit for users to use it. To maintain this feature, Java 8 was supported, and Mac OSX 10.11 and Windows 10 were also supported.

Platform for analysis tools and chart plotters for time series data was initiated to develop concomitantly with Flint and PhysioDesigner.

3.3 Development of Flint K3 for cloud and HPC computing

So far Flint K3 showed a brief figure with multiple panels of graphs of simulated time series that automatically selected. In this FY, graphing function was enhanced. Now users can interactively select variables to draw graphs. Because the data size that must be sent from the simulation server to the client can be huge, the data is gradually sent, and graph resolution is gradually improved as data points that the client received increase.

3.4 Model development of pancreatic beta cell and analysis for pancreatitis

Pancreatic beta cell plays an important role to control blood sugar level by secreting insulin. Malfunction of insulin secretion of beta cells is one major reason of diabetes. Prediction of dynamics of membrane potential and ions concentration for the cases of normal condition, pathological condition and medication can be beneficial for considering therapeutic strategy and for discovering new drugs. We have initiated a collaboration with Okinawa Prefectural Chubu Hospital on prediction of pathological condition of diabetes, and of symptoms of post-ERCP acute pancreatitis. We have already an acceptance from ethical committee to deal with anonymized patients data provided by Chubu hospital.

Figure 4: Scheme of a beta cell model displayed on PhysioDesigner, and simulation results for normal and pathological cases.

Drugs may interact with multiple molecules in the human body, and such drug action, known as polypharmacology, may be efficacious or deleterious for the treatment of disease. For example, β-lactams exhibit antibacterial action principally by targeting multiple penicillin-binding proteins. Similarly, a multi-target strategy has advanced the treatment of neurodegenerative diseases. On the other hand, poor drug selectivity may increase therapeutic risks and negatively impact drug development because of unintended drug-target interactions. An example of this is the cardiotoxicity of kinase inhibitor Sunitinib. Identification of drug targets is therefore a critical stage of drug development. Drug target identification is therefore a critical task of drug design.

It is only relatively rare that a promising screening pipeline for prediction of drug-target interactions have become available to research groups. Results from some resources mainly focus on only predicting interaction targets, but network pharmacology information is limited. Advances in systems biology are creating opportunities for the application of network pharmacology to identify drug targets over molecular pathway maps. Many of well-curated pathway maps explicitly describes molecular interactions. These open resources allow a deeper understanding of how small molecules acts within molecular networks.

We have developed an intelligent screening pipeline to make network-based screening efficient and practical. It incorporates an elaborately designed scoring function called docK-IN (combining docking with intelligence) for molecular docking to assess protein-ligand binding potential. docK-IN was initially developed in our previous work to address the critical issue of commonly used docking programs that were too inaccurate for reliable prediction. We have also developed a web service called systemsDock (http://systemsdock.unit.oist.jp/) specifically designed for network pharmacology-based prediction and analysis, which permits docking simulation and molecular pathway map for comprehensive characterization of ligand selectivity and interpretation of ligand action on a complex molecular network. For large-scale screening and ease of investigation, systemsDock has a user-friendly GUI interface for molecule preparation, parameter specification and result inspection. Ligand binding potentials against individual proteins can be directly displayed on an uploaded molecular interaction map, allowing users to systemically investigate network-dependent effects of a drug or drug candidate (Figure 5-1). systemsDock is the first web service enabling drug developers to carry out network pharmacology-based prediction and analysis by integrating results from structural biology with systems biology. We have applied the intelligent screening pipeline together with the web service to drug discovery project practically. For instance, we investigated compounds anti-influenza therapy using systemsDock with a deeply curated influenza infection pathway called FluMap (http://www.influenza-x.org/flumap/). For demonstration, a colored FluMap shows network-based screening results (Figure 5-2). 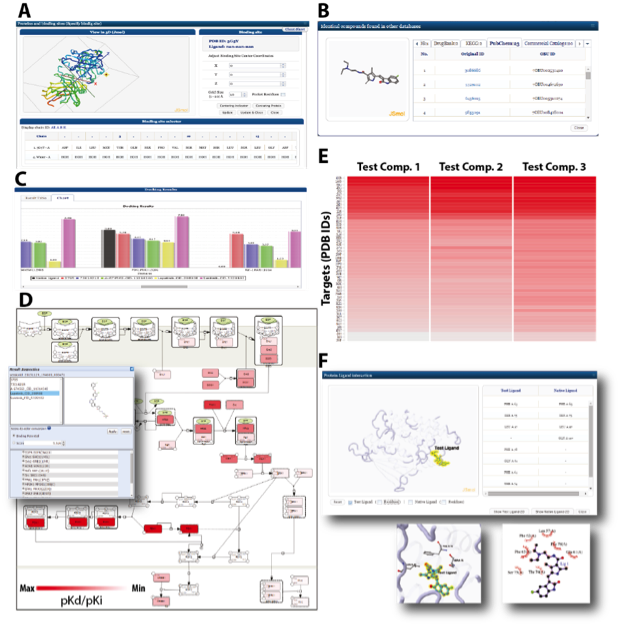 Figure 5-1. Screenshots of the systemsDock web interface. (A) Interactive functions for binding site specifications are accessed by clicking on the displayed protein structure or amino acids listed in the sequence table to define the location of the preferred binding site. Users can adjust x-y-z coordinates to refine the location. (B) Links are provided for the test compound in external databases, as well as to visualize the compound in 3D. (C) Prediction results are furnished in an interactive histogram. Docking scores for each compound are grouped by proteins. By clicking on one of the bars, molecular binding interactions can be graphically shown in 2D/3D for structure-based investigation as shown in (F). (D and E) Visualizing results through a pathway map provided by the user or using a heat map. Colors of proteins are displayed as white-to-red scales or as white and red according to the docking scores. Click on a colored node (i.e. protein) to display binding interactions in 2D/3D as shown in (F). (F) Visualizing protein-ligand binding interactions of the test compound or native ligand in 2D/3D. Protein residues involved in the binding interaction are automatically identified. For reference, those that interacted with a native ligand, if available, are also listed. Clicking on any of the residue entries listed allows users to center and display the specified residue for closer inspection.

Figure 5-2. Prediction of a test compound (PubChem CID: 3795) against 180 FluMap proteins using systemsDock. FluMap describes the intermolecular network of influenza A virus life cycle from (1) entry, (2) endocytosis, (3) fusion, (4) transcription/translation, (5) assembly, (6) packaging to (7) budding. Docking scores are converted into white/red color according to a cutoff value at 5.52 pKd (white: inactive; red: active; gray: not in the test or no results). Results are projected on the pathway map. The JAK1 protein, which plays a major role in the JAK/STAT signaling pathway, is enclosed in a black frame.

From December 2014, DCOES are operated in 19 faculty houses in OIST campus and are continuously supplying electricity to houses and collect data. DCOES real data in 2015 show average 141.5 kWh energy generated and supplied to residents. Around 10-17 kWh energy was exchanged per day. Average self-sufficient rate (ratio of supplied energy from solar panels) is 0.37 and max is 0.61. 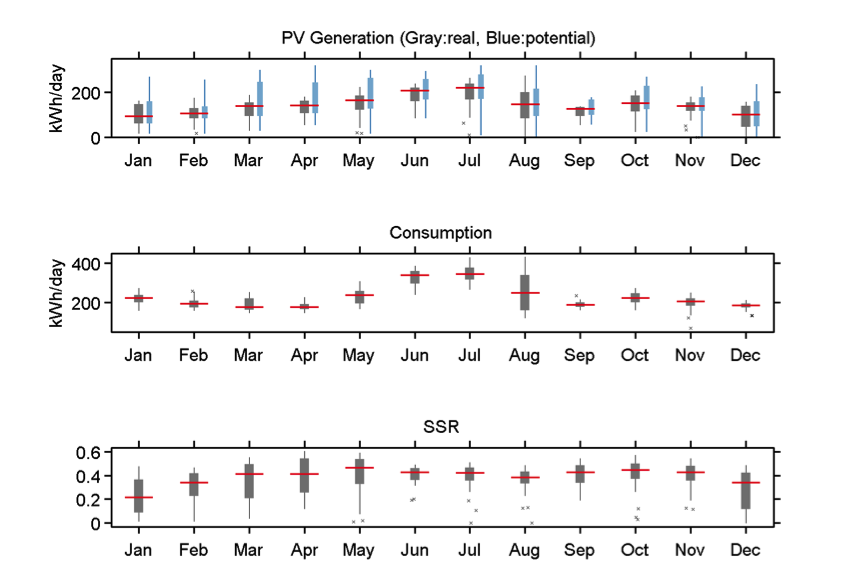 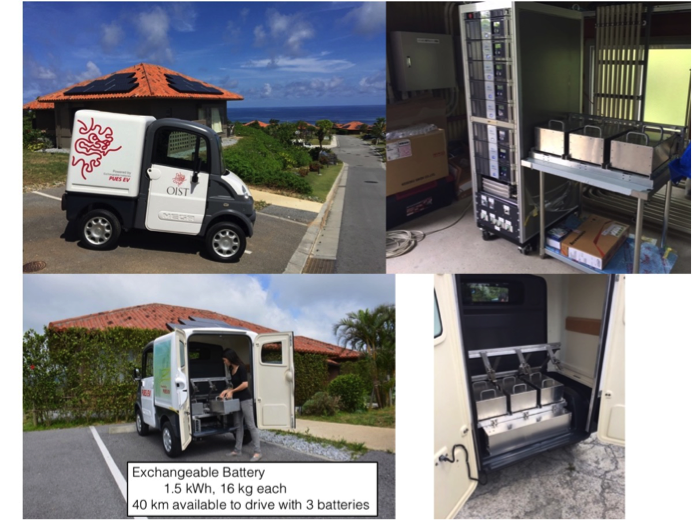 3.8 The sustainable living in the Hot-Humid Region

This project aims to provide the highest quality of life in remote areas that lack basic infrastructure (water, energy, etc.). Based on this concept, we finished to build the experimental house with Misawa R&D. This house includes 8 kW PVs and 2 kW wind turbine as electrical generator, 3 kWh battery system, and DC appliance as consumption. In addition to these renewable energy system, the following four systems are built in; 1) Cascade Solar system, 2)Cascade Solar desiccant, 3) Wall radiation cooling system, and 4)Locally supplied water system. We will collect and anlyze data from this experimental house, and would like to suggest the optimal system structure in terms of energy and water. 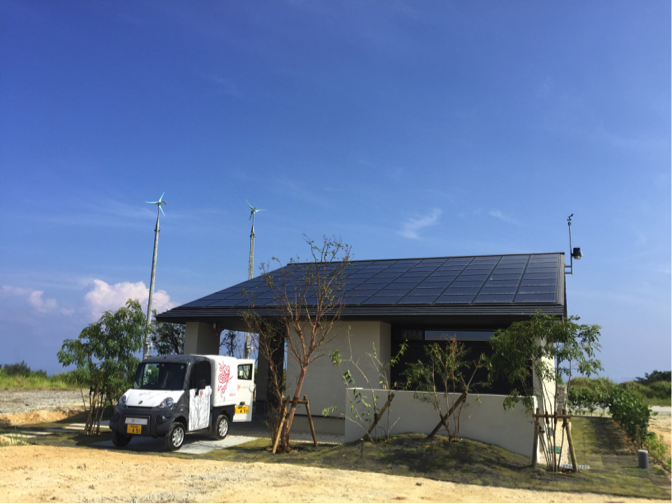 Figure 8: The experimental house and EV