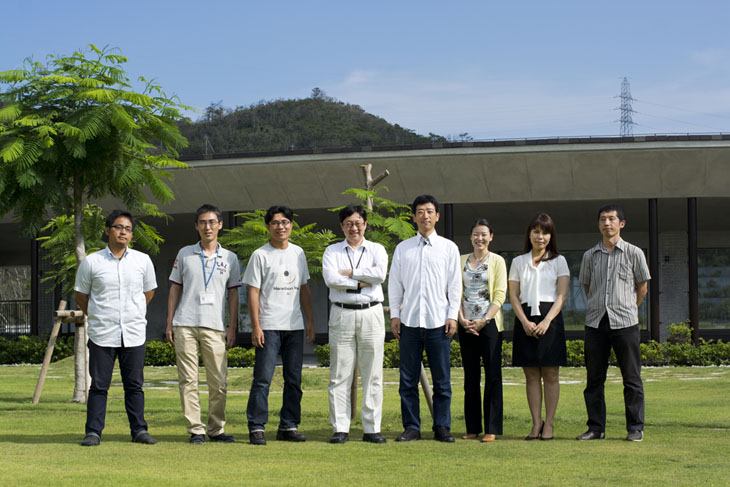 Out unit started the Open Energy System Project with SONY CSL and Okisoukou, funded by Okinawa Prefecture. In this project we ‘ll installed PVs and battery System in faculty houses in OIST campus and each house connects DC power line and communication line. We are developing the distributed energy control system and exploring a novel energy exchange algorithm based on real data and simulation.

The major achievements on PhysioDesigner development in FY2013 were development of functions to integrate timeserise and morphological data. Time series data obtained by either experiments or simulations can be integrated in PHML models on PhysioDesigner. Integrated time series can be used as an input to derive the model, or as constraint condition for the dynamics of the model. Besides that, morphological data can be also integrated with time series data to create movie showing the simulation results.

We also defined Physiological Hierarchy Parameter List markup language (PHPL) which is an XML based language describing a set of parameters (values of static-parameter type physical quantities and initial values of state type physical quantities) to store them apart from PHML model itself. Then a PHPL file can be used to set multiple parameter values in a PHML model at once.  Sometimes a single model can represent different physiological phenomena by working with different parameter values. In such a case, if it is possible to switch those parameter values from one model to another model at once, it would be convenient. There is also another kind of demand. During a simulation, sometimes we want to change parameter values when a certain event happens.  PHPL will help to switch over a model representing a certain physiological function into a model of another kind of function, and to changing a set of parameter values at once in mid-course of a simulation. 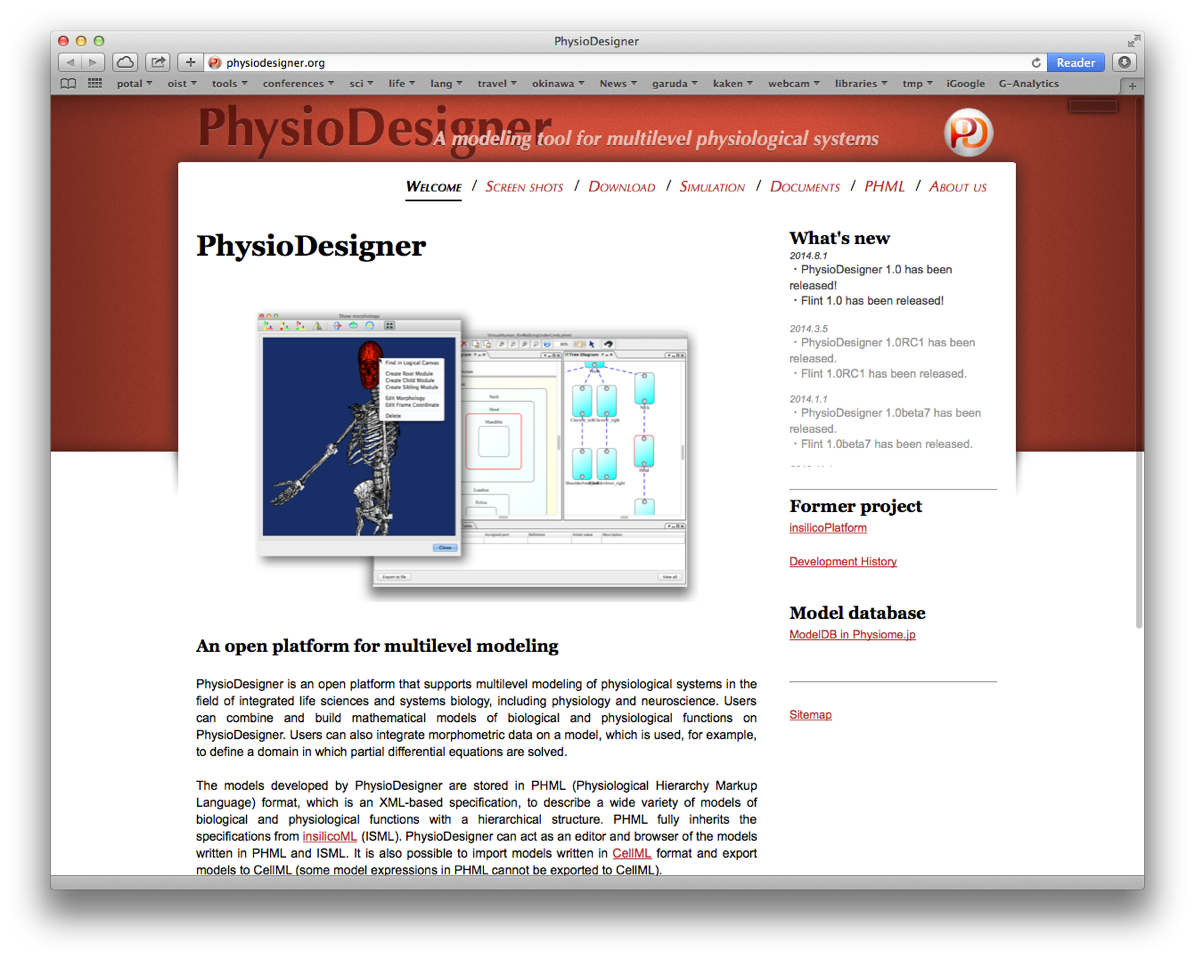 3.2 Development of software for visualization of simulation results: PhysioVisualizer

Using PhysioDesigner, we can create multilevel large scale computable models of physiological systems. Flint can conduct the simulations of those models. We have been developing PhysioVisualizer which can visualize such simulation results and can deal with the morphological object and simulation data with the concept of the layers. Namely it can overlay several layers in one visualization. To superimpose several layers is not simple implementation. A well-prevailed library for visualization called VTK cannot manipulate such cases. Hence we have re-implementing PhysioVisualizer with KVS library. The PhysioVisualizer version 1.0RC has been released on March 2014. 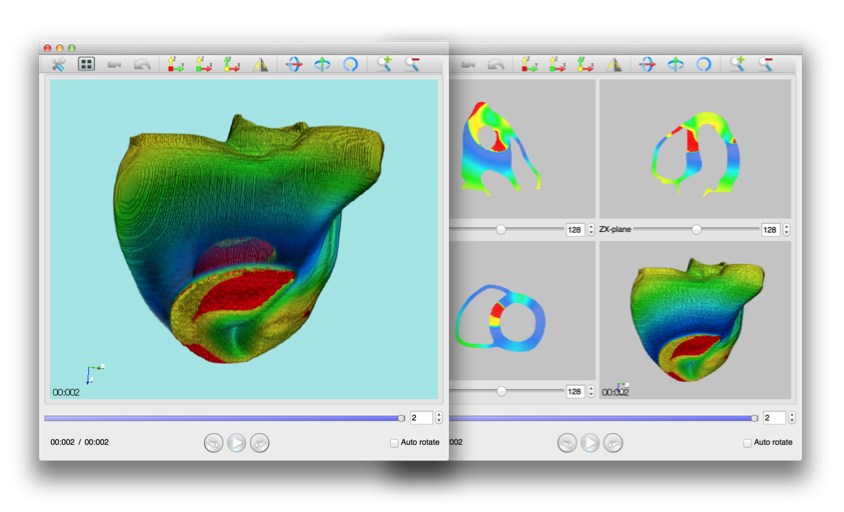 3.3. Development of software for simulations of multilevel physiological models: Flint

Flint is a simulator aiming to be capable of simulating a multilevel physiological models described in PHML/SBML. At the end of FY2013, we have released Flint 1.0 RC1 for those who interested in running simulations of such models on their desktops. Now it comes with better performance and support of latest PHML features as well as useful functions such as rendering logarithmic scale graphs. We also have enhanced its interoperability with existing desktop and web applications for biology by supporting Garuda API complied with the Garuda alliance (http://www.garuda-alliance.org/).

We started to develop K3 with ``edubaseCloud'' (http://edubase.jp/cloud) which is an open source based computer cloud for education of cloud engineering developed in National Institute of Informatics (NII). But now NII provides more advanced system called “Academic Inter Cloude (AIC)”, hence we have prepared to migrate the K3 system to the AIC.

K3 is composed of two servers. One is an interface server (IFS), which receives job requests from users and manage the jobs. Simulation jobs are sent from IFS to simulation servers (SS) in the clouds. SSs evoke a computation program (CP) in every node assigned for the simulation. CPs perform numerical computation of the model in parallel having communications among them. 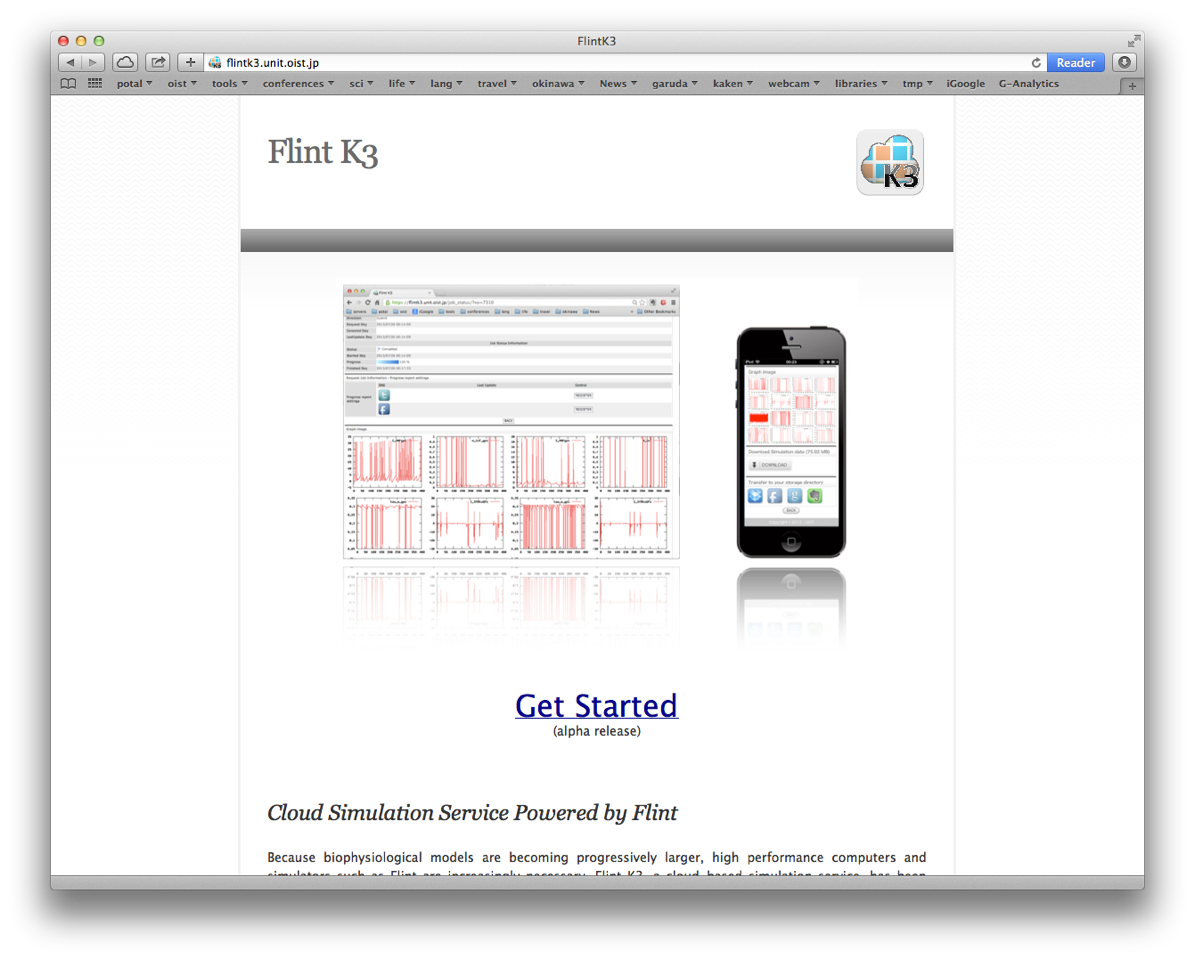 3.5 Porting Flint to The K computer

We have ported Flint to the K computer (http://www.riken.go.jp/en/research/environment/kcomputer/) in order to take advantage of its computation power for simulating large-scale models. This project finished at the end of March 2014. Combining inter-node parallel computation with better scheduling, Flint now calculates both ODE and DDE (Delay Differential Equation) faster, and it became possible to finish a simulation on a large model like heart cells within a feasible time span. The technique developed in this attempt is based on MPI so that it is portable up to recent HPC architecture, i.e., can be applied to porting it to any other HPC facility.

We have renovated the portal site for Physiome opened at http://physiome.jp. This site provides several tools helpful for multilevel modeling, simulation and visualization as well as databases of models, time series data and morphological data. 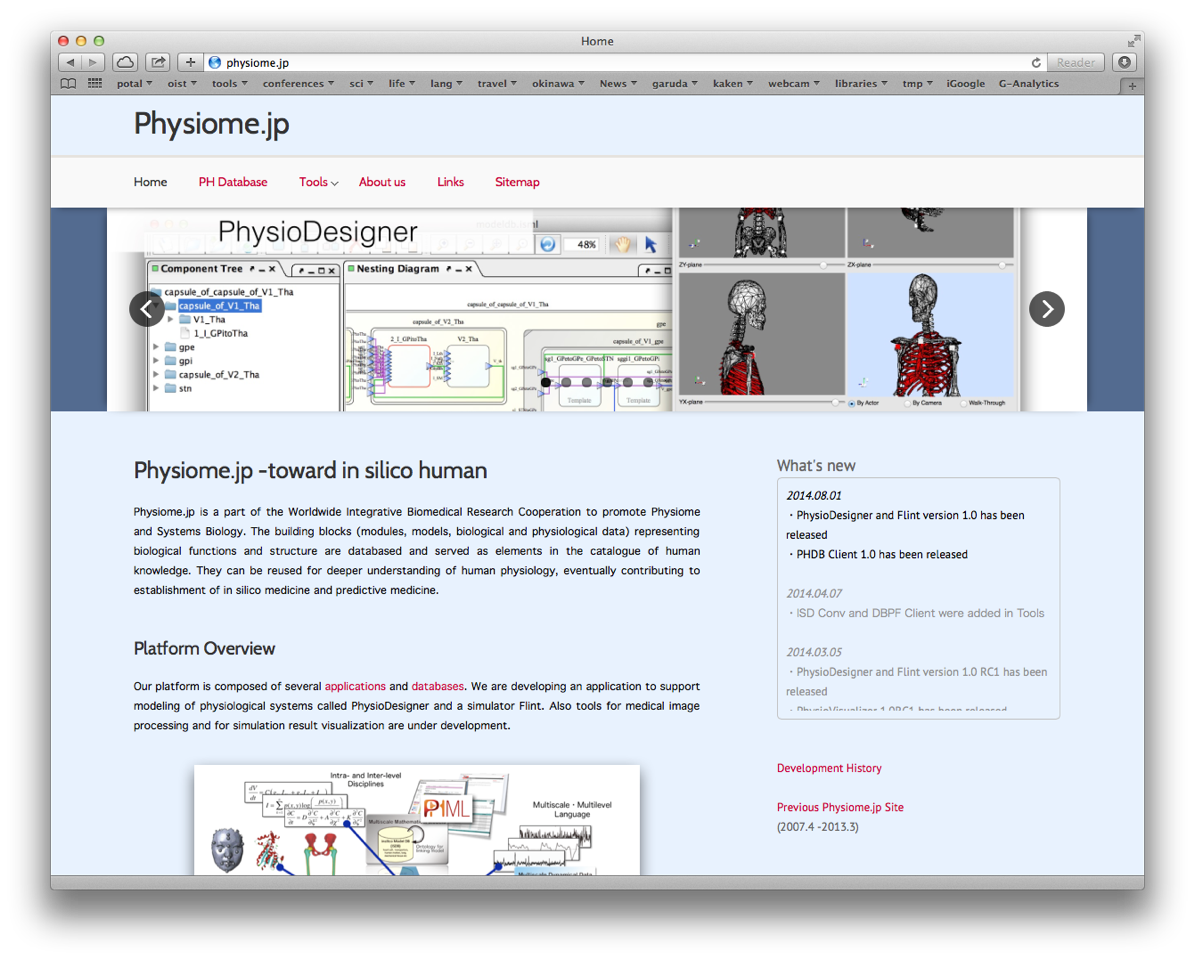 3.7 Development of a web and community based system for pathway publisher: iPathways+

Open Biology Unit and SBI has jointly developed iPathways+ focusing on the feature of publishing the map models. . iPathways+ does not equip interactive functions, instead, as a new feature, we added a function to enable users to embed a map in other web sites, as like google map. This feature has a big potential to expand collaborations with other database sites. We have released iPathways+ 1.0 at http://ipathways.org/plus/.

Drugs may interact with numerous molecules in the human body. Approximately 35% of known drugs or drug leads present multi-target activity. Even when a drug is claimed to have high selectivity, it probably binds to proteins that are not identified as targets. Such unexpected off-target interactions may result in adverse reactions, which increase therapeutic risks and negatively impact drug development. To comprehensively assess pharmacological effects, systems pharmacology has been developed, in which various bioinformatics resources assessing different structural levels, from molecules to systems are integrated. A well-curated, comprehensive molecular interaction network is the focal point of the systems pharmacological approach. Such a network can reveal causes and effects of protein interactions over signaling networks, metabolic networks, and other related pathways. With a deeply curated network map that describes signaling cascades and interactions among molecules, one can carry out network-based screening to systematically identify target proteins of a given drug candidate and to assess its impact. Thus, network-based screening appears promising for drug repurposing and safety prediction. To accurately predict a drug's effects across molecular networks requires development of high-precision molecular docking simulation systems, and applying them over molecular networks to compute aggregated effects of drugs. We have developed a prediction pipeline for network pharmacology, which consists of a high-precision docking simulation developed in our unit lately (DOI: 10.1371/journal.pone.0083922) and the facility of CellDesigner, illustrated in Figure 6. The prediction pipeline enables drug developers to speed up drug discovery with good accuracy and can be a leading provider of early stage. 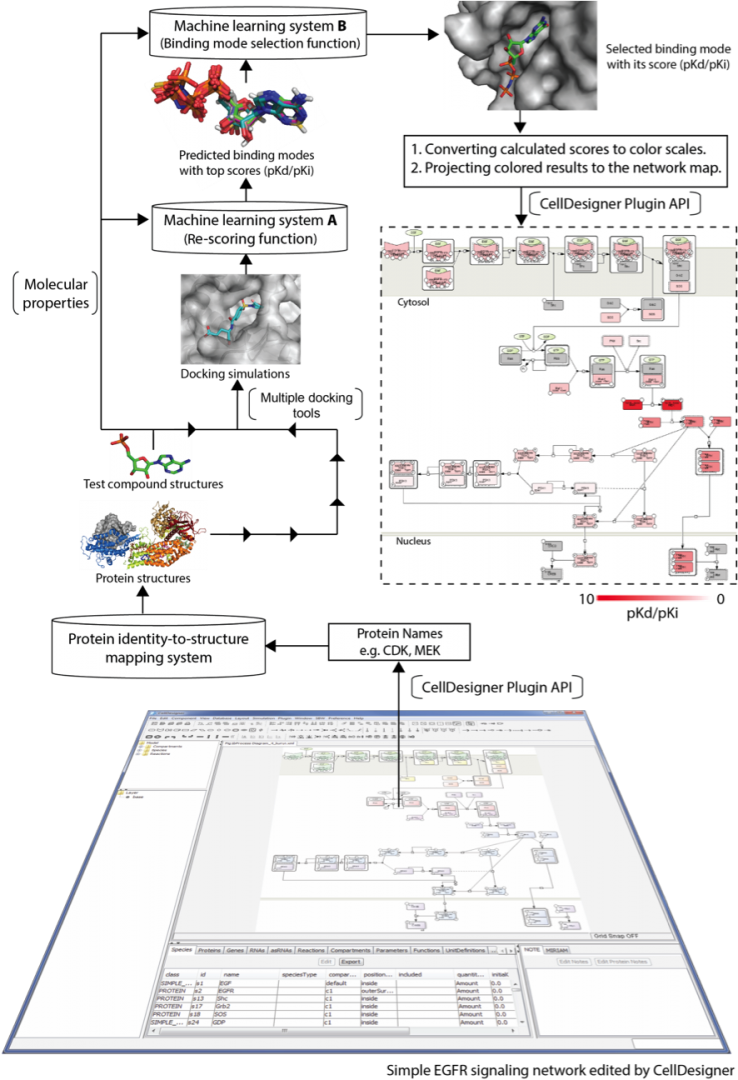 Figure 6: Schematic of the signaling network-based screening pipeline. First, a signaling network is launched by CellDesigner. The identities of proteins involved in the network are retrieved by the CellDesigner plugin API to look up corresponding protein structures in 3D through a protein identity-to-structure mapping system. Second, users submit test compounds for docking simulation. After docking simulation using three docking tools, machine learning system A is then applied to re-score generated binding modes based on features of binding interactions and the test compound's molecular properties, after which, it ranks them. Machine learning system B is subsequently to select a binding mode with the greatest reliability from the three top-score modes. Screening is iterated to assess the next protein until all pathway proteins have been tested. Finally, docking scores are converted into a white-to-red color scale to interpret binding strength, and are projected on the network map for a comprehensive inspection.

We started to simulate basic energy exchange algorithm based on observed solar irradiation data and the same PV and battery configuration with installed faculty houses. From 16-days simulation output, total 58 kWh energy transfers within 137 transaction are executed between 5 houses and 204 kWh energy transfers with 512 transactions are executed between 17 houses. We ‘ll continue to develop and expand this simulation and explore the novel energy exchange algorithm. 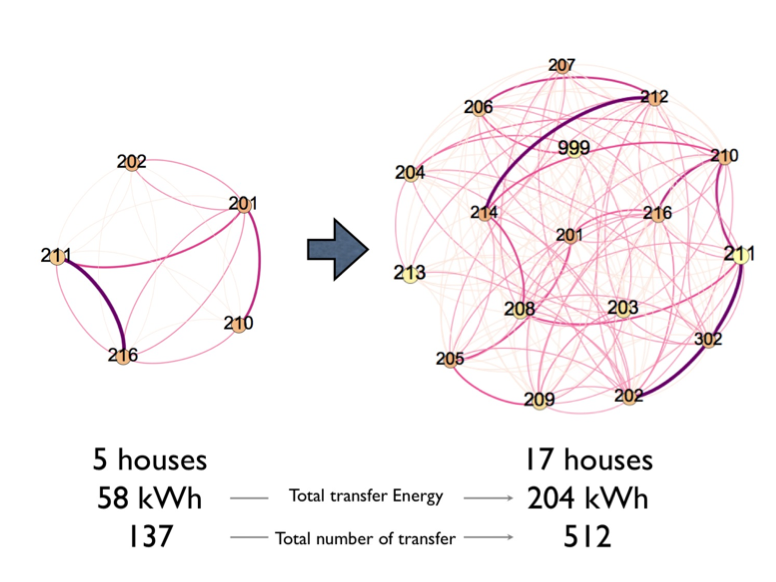 Title: Allosteric Enzymes in the Glycolytic Pathway as Drug Targets for Sleeping Sickness

Title: Particle-Based Rendering and its applications