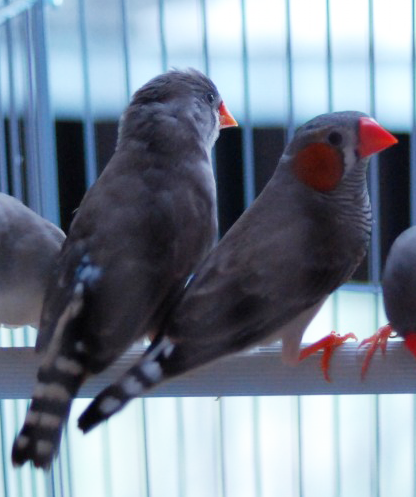 In the developmental 'critical period', neuronal circuit can be intensively shaped upon sensory inputs. Like humans learn to speak, songbirds acquire their ability to making a complex sound ‘song’ by mimicking tutor songs through auditory feedback during well orchestrated time window. In zebra finches, only male birds develop an individualized song and keep it throughout life. Young birds hear their tutor’s song and memorize it during a sensory phase. After male birds begin to sing themselves in the following sensory-motor phase, they must listen and gradually match their vocal motor output to the memorized tutor ’template’ via auditory feedback, and finally sculpt their own song for life.

How does the early auditory experience shape the birds’ brain circuits?

In the zebra finches the brain areas which are necessary for song learning and production are called ‘song system’. Neurons in the song system and the connecting auditory area, develop a selective auditory neuronal responsiveness to their own song, and learned tutor song. This neuronal responsiveness is believed to underlie song learning. However, which auditory components are used to discriminate complex birds unique song to individual. More interestingly, these neurons also show a auditory response to the songs of other individual in the same species. Are these neuronal properties depending on their experiences ? How do the bird can recognize of the same species of song with the limited exposure of individuals ?  We are trying to answering these questions with behavioral control and electrophysiology experiments.

Why can birds learn a new song in the limited time window during development?

Neuronal mechanism of the critical period is studies most intensively in mouse visual system, in which the maturation of GABA inhibitory function triggers the opening. Anatomical markers, like such as PNNs enwrapping specific GABA cells, myelin signaling, as well as recently proposed endogenous prototoxin Lynx1, are reported to emerge at the end of this critical period to consolidate circuit rewiring. Our recent study suggests the overlap neuronal mechanism of critical period, inhibitory control of timing, between mouse visual system and bird song learning. By looking into the inhibitory function maturation and it’s plasticity, we would like to see the time window mechanism in the birds brain.