Like humans learning to speak, songbirds learn to sing by hearing what adult birds are singing, preferentially other conspecific birds, during a developmental critical period. In zebra finches, the best-studied model of songbird vocalization, males sing and females do not. Juvenile male zebra finches listen and memorize tutor songs, normally their fathers’ songs, during an early, sensory learning period. Then in a subsequent sensory-motor learning period, they vocalize by themselves and shape their own songs, by matching their songs to the memorized tutor songs. We are especially interested in how auditory experience during sensory learning period shapes the brain circuitry to form a memory of auditory experiences. In addition, we are learning how auditory information is processed to distinguish conspecific songs for referentially learning from them.

During early development, juvenile songbirds listen to and form an auditory memory of the adult tutor song. Thereafter, they use this memory to shape their vocalizations in later sensorimotor learning. The auditory association cortex, called the NCM, is a potential storage site for tutor song memory, but no direct evidence has been found for a neuronal representation of this memory in juvenile songbirds. We explored the neuronal substrate for tutor song memory by recording single-neuron activity in the NCM of behaving juvenile zebra finches. We found there are two types of neurons in NCM, different in spike shape and firing rate. Both of the neurons were responsive to many of behaviorally relevant auditory stimulation, including their own song, father’s song or other zebra finch songs, before having adult song experience. In contrast, after being tutored, a subset of one neuron type began to exhibit highly selective auditory responses to the experienced tutor song. Moreover, blockade of GABAergic inhibition, as well as a sleep state, decreased the auditory selectivity to a specific song. Taken together, these results suggest that experience-dependent recruitment of GABA-mediated inhibition shapes auditory cortical circuits, and the tutor song memory is therefore sparsely represented in a subset of auditory cortical neurons. 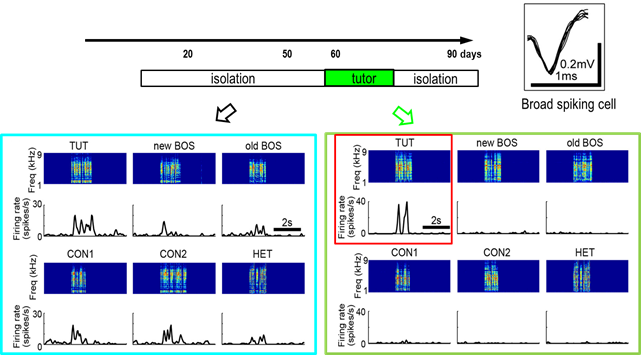 Male zebra finches learn songs from their auditory experience during the juvenile period. Among varieties of song they hear, interestingly they preferentially learn from conspecific songs. Songs of zebra finches generally consist of a few acoustical elements, called syllables, which emerge in a stereotyped sequence separated by small silent gaps (~30 ms). However, it is largely unknown how zebra finches detect their species song and proceed to learn from it. We investigated how song auditory information is processed and cognized in the auditory circuit, especially in the primary auditory area, field L (homologous to the mammalian primary auditory cortex) where neurons detect natural sound such as birdsongs out of noise.

In subregion L2a (homologous to layer 4 in the mammalian auditory cortex), where neurons receive thalamic inputs, neurons showed auditory responses to continuous white noise (WHN) as well as to conspecific songs (CON), while neurons in the downstream layer, L3, did not respond to WHN. In L3 we identified two distinct neuronal groups, lower firing neurons (LF) and higher firing neurons (HF). Interestingly, HF responded to WHN when it was presented with the same durations and intervals as syllable elements of CON (white noise song: WNS), while LF did not. In contrast, both LF and HF responded to the CON, even when the frequency phase was scrambled within each syllable. Moreover, when HF was stimulated with same CON syllables repeatedly, they did not response when the silent gaps in between were too short (<5ms), and showed synchronized response to the repeat with decreasing of firing along with repeats when the durations of silent gap were relevant with those in zebra finch songs. These results suggest that within the auditory information processing for song cognition, temporal cues of syllable onset and offset are proceeded independent of the morphology information of songs. 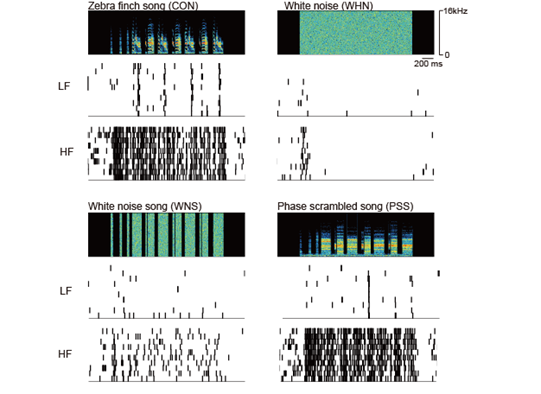 3. Neural basis for vocal learning in a songbird during the critical period