Songbirds learn to sing their courtship song from their tutor song experience intensively during development as humans learn to speak. Their early auditory experience shapes their brain circuits for forming a memory of tutor song, then would affect later period of motor song learning and higher cognitive functions. Our lab has been interested in how songbirds detect their own species song for song learning and how early auditory experiences shape neuronal circuits in the brain, namely how to form a memory of tutor auditory experiences. Based on the findings of last years, we tried to identify auditory neuronal circuits anatomically and physiological effect on auditory sensory activity of social interaction with tutor birds.

Songbirds are learning to sing from auditory experiences of singing of tutor birds during development. Juvenile birds intensively learn from the auditory experience through social interactions with tutors, while they learn little from passive auditory experiences, such as playback from a speaker. However, underlying neuronal mechanism for social interaction dependent song learning has yet to be elucidated. In previous years we showed that a subset of neurons in the higher-level auditory cortex of juvenile zebra finches exhibit highly selective auditory responses to the tutor song after song learning, suggesting an auditory memory trace of the experienced tutor song (Yanagihara and Yazaki-Sugiyama, 2016). We show that auditory responses of these selective neurons became greater when juveniles were paired with their tutors, while responses of non-selective neurons did not change (Fig 1). These results suggest that social interaction modulates auditory cortical activity and might function in state-dependent song learning. 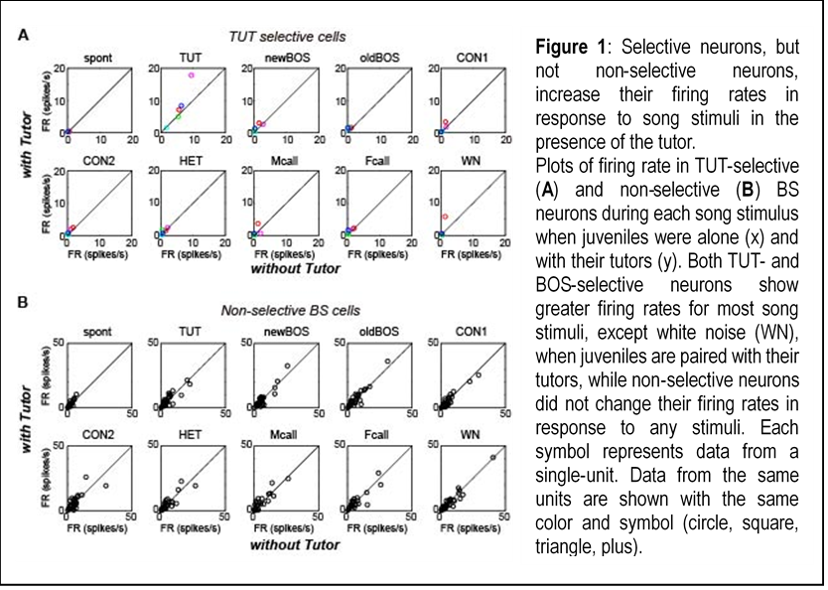 We have investigated how zebra finches detect their own species songs which are different between each individual and found that there are two complemental group of neurons in the brain area, called Field L, which is homologous to mammalian primary auditory cortex; One group of neurons detect temporal patterns and another group responds to acoustic features of songs. We also revealed that zebra finch juveniles learn acoustic features of song elements, while they keep silent gap temporal patterns when they are raised by Bengalese finch foster parents. In FY 2017 we further tried to identify these two group of neurons anatomically. To visualize volume of neurons we have developed tissue clearing technique and viral vectors. By combining these techniques, we visualize the anatomical structures of neurons in the primary auditory cortex anatomically and categorized them into group with their cell body shape and axon projection patterns. We are further trying identifying neurons anatomically after intracellular recording of their auditory physiological properties to match with the categorized group in volume data.