FY2019 marks the fifth year since the unit was established at OIST.  Our efforts to engineer functional nucleic acids encompass systems that operate in test tubes, mammalian cells, and artificial cells. A number of key projects initiated at OIST came to fruition as publications some of which are summarized below. Furthermore, multiple unit members successfully competed for KAKENHI grants.

2.2 Applications of aptamers for biosensors

2.3 Collaboration with an industrial partner

Artificial cell models composed of lipid vesicles (liposomes) encapsulating an in vitro (cell-free) transcription-translation system (IVTT) are emerging as a part of the efforts to synthesize cells from bottom up. Researchers have constructed artificial cells that mimic various biological properties such as DNA replication, cell-cell communication, and cell division. While the ultimate goal is to synthesize artificial cells (from scratch) that replicate and evolve like natural cells, this field is still at an early stage where artificial cells are being equipped with various biological and genetic machineries individually. We recognized that artificial cells are still limited in their ability to genetically respond to chemical signals in and out of cells. Such chemical interfaces are critical for artificial cells to sense and respond to a dynamic environment by regulating gene expression. Consequently, we proceeded to demonstrate the utility of riboswitches as a chemical interface in artificial cells by developing an RNA aptamer for a novel (desired) signal, engineering cell-free riboswitches, and using them in artificial cells to confer new phenotypes that are triggered by the aptamer ligand (Fig. 1).

Histamine was chosen as the chemical input. We viewed histamine as a model chemical (inflammation) signal that could be sensed by artificial cells, which in turn respond to histamine by expressing an arbitrary protein that confer a specific phenotype.

First, we successfully selected an RNA aptamer for histamine with a Kd of 370 nM. Second, the aptamer was used to engineer histamine-activated riboswitches with ON/OFF ratios as high as 30 (Fig. 1B). Finally, in collaboration with Prof. Tomoaki Matsuura at Osaka University, we constructed artificial cells containing riboswitch-controlled genes (Fig. 1C). By controlling the expression of a nanopore-forming protein (α-hemolysin), we demonstrated the histamine-triggered release of a small molecule payload (model drug) (Fig. 1E). Additionally, histamine-triggered self-destruction was demonstrated using phospholipase C as a model of an emergency kill-switch. The modularity of riboswitches further adds to the flexibility in programming artificial cell behavior. A provisional patent application has been filed for the histamine aptamer, with possible applications for biosensors, as histamine in food samples are routinely monitored for food poisoning detection. 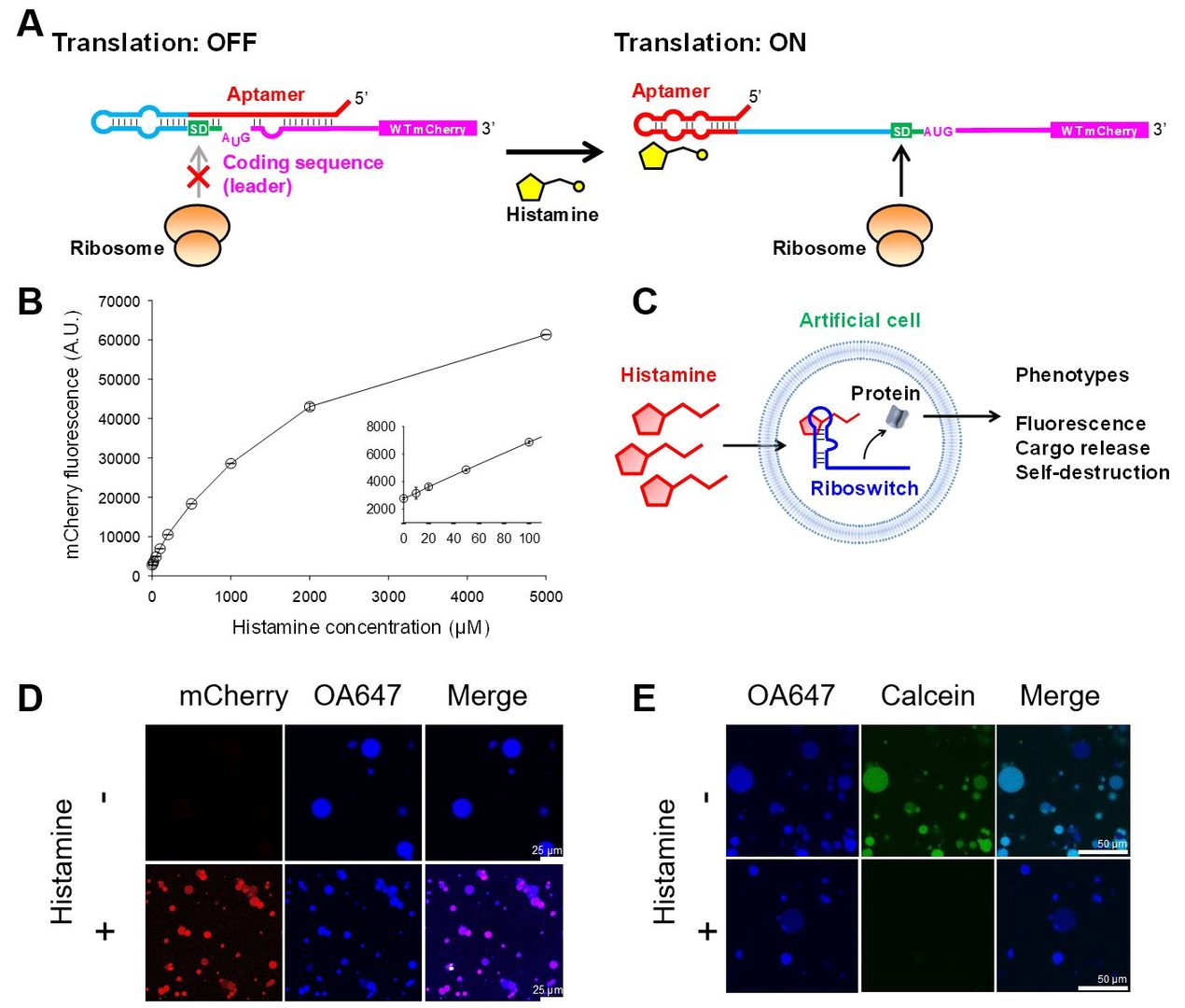 3.2 Minimization of an RNA Ligase Ribozyme

We used the deep sequencing-based assay to analyze an important class of laboratory-evolved ribozymes, an RNA ligase ribozyme that catalyzes the template-directed ligation of an RNA fragment’s 3’-OH group and the 5’-triphosphorylated RNA fragment (Fig. 2A). As the template-directed nature of the reaction allows for the propagation of genetic information, and the ligation chemistry is analogous to the modern-day RNA and DNA polymerases, these RNA ligase ribozymes may resemble what may have existed the RNA world. In fact, one such ligase F1 was engineered to undergo crosscatalytic self-replication without any protein factors (Robertson & Joyce Chem Biol 2014; 21, 238-245.).

We decided to perform deep mutational analysis of an F1-derived ribozyme (F1*) using deep sequencing. In addition to single and double substitutions, all possible single and double deletion mutants were synthesized and analyzed. This analysis led us to identify a nonessential region within the catalytic core, which was removed and confirmed to be catalytically active (minF1). minF1 was further analyzed by deep mutational analysis which revealed base-base interactions previously unknown and slow but still active mutants with 4-base deletions (4d394) (Fig. 2B,C). The minimized catalytic core of only 18-nt suggests that relatively small RNA sequence motifs may be able to catalyze chemical reactions, albeit slowly. However, such small but slow ribozymes may have been overlooked in the conventional laboratory selection/evolution experiments in which faster variants quickly dominate slower variants. We were able to discover such motifs thanks to the high throughput assay and systematic analysis enabled by deep sequencing. Because smaller motifs have a higher probability of emergence in the primitive RNA world in which replication efficiency and accuracy were modest, such small catalytic motifs may be worth further investigations.

While existing mammalian riboswitches leave some room for improvement in performance, it is important to start exploring the potential applications of these RNA devices. Using prototypical a guanine-responsive riboswitch (GuaM8HDV developed in our group) as a model, we have started applying riboswitches for more practical applications.

Vesicular stomatitis virus (VSV) is a unique virus with potential clinical applications. VSV is a nonsegmented, negative-sense, cytoplasmic RNA virus that replicates without DNA intermediates; therefore, there is no risk of genomic integration. Furthermore, VSV is virtually nonpathogenic to humans and can stably (>weeks) and strongly express exogenous genes. VSV vectors have been investigated for applications as oncolytic viruses and vaccine vectors.

We used a guanine-responsive riboswitch (GuaM8HDV) to reversibly regulate VSV vector replication and transgene expression over the course of 12 days (Fig. 3). We also identified the best combination of genes to be regulated by the riboswitch.

Most current synthetic RNA devices such as those described above are designed to function in their thermodynamically stable structures. Aptamer-ligand interaction, for example, provides the driving force to alter the thermodynamically stable structure, resulting in functions such as self-cleavage and gene regulation. In reality, however, some RNAs misfold during transcription as RNAs are folded cotranscriptionally. Some misfolded structures are kinetically (but not thermodynamically) stable, which may explain some of the unreported failures of RNA design efforts.

We first designed robust cotranscriptionally-generated metastable RNA structures that persist for hours at ambient temperature. These structures almost entirely relaxed to the thermodynamically stable structures after heat denaturation. The devices were designed so that the relaxed (thermodynamically stable) structures become fluorescent. We then modified the devices so that the relaxation was catalyzed by specific RNA sequences. Transient hybridization of the trigger RNA exposed an internal toehold sequence through which structural rearrangement was initiated isothermally. The trigger RNA was released upon relaxation, allowing it to catalyze additional structural rearrangements. This metastable RNA device thus functions as an RNA sensor with a signal amplifier and an optical readout (Fig. 4). More importantly, the device is self-powered by the energy stored in its metastable structure.

Aptazymes have been used extensively to enable small molecule-responsive gene regulation in mammalian cells. However, the general design strategy of aptazymes has mostly been limited to inserting an aptamer to an existing stem loop structure of a self-cleaving ribozyme. This aptamer-in-ribozyme architecture often necesitates extensive and labor intensive screening of variants in the "communication module", or the sequence that interface the aptamer and the host ribozyme.

We devised a new aptazyme architecture that place an aptamer and a ribozyme in tandem, with a rationally-tunable anti-ribozyme sequence (Fig. 5A). In this configuration, the ligand-bound aptamer and the ribozyme structures are mutually exclusive. In the absence of the ligand, the ribozyme structure is more stable, which results in mRNA cleavage and low protein expression (OFF). In the presence of the ligand, the aptamer-ligand structure forms resulting in the inhibition of ribozyme cleavage (ON). We envisioned that we could optimize the riboswitch performance by semi-rational tuning of the anti-ribozyme sequence.

We demonstrated the design strategy by using a guanine aptamer fused to a twister ribozyme. After several rounds of optimization, we obtained several riboswitches with an ON/OFF ratio > 6.0 (Fig. 5)

A provisional patent application for the development and applications of a histamine aptamer was filed.