Established at OIST since 2014, the Molecular Genetics Unit is interested in:

Image: acquired with the support of OIST Imaging support group.

(a) Genome sequencing and assembly

Paucity of high quality genome assemblies has been the rate limiting step in many evolutionary and functional studies for many years. We have focussed our efforts mainly on metazoan genomes (but not only) to provide genomes that can be used for functional and comparative genomics studies. Our unit has accumulated extensive experience in genome assembly and annotation. Using state-of-the-art sequencing technologies (Illumina, Pacific Biosciences, 10x Genomics, Oxford Nanopore) and computational frameworks, we have in the past years published the genomes of two hemichordate species (Saccoglossus kowalevskii and Ptychodera flava),  the genome of the California two-spot octopus  (Octopus bimaculoides) , the genome of African clawed frog (Xenopus laevis), the European amphioxus (Brachiostoma lanceolatum), the cassava (Manihot esculenta) genome, several citrus fruit genomes and the Hawaiian bobtail squid (Euprymna scolopes). We have moreover improved the quality of previously sequenced genomes such as that of the American amphioxus (Branchiostoma floridae).

Current efforts are aimed at the assembly of genomes at the chromosome-scale, which allow unprecedented comparisons between genomes. We  are currently working on several exciting genome projects.

Acorn worms, also known as enteropneust (literally, 'gut-breathing') hemichordates, are marine invertebrates that share features with echinoderms and chordates. Together, these three phyla comprise the deuterostomes. In 2015 we published the draft genome sequences of two acorn worms, Saccoglossus kowalevskii and Ptychodera flava. By comparing them with diverse bilaterian genomes, we identify shared traits that were probably inherited from the last common deuterostome ancestor, and then explore evolutionary trajectories leading from this ancestor to hemichordates, echinoderms and chordates.

The hemichordate genomes exhibit extensive conserved synteny with amphioxus and other bilaterians, and deeply conserved non-coding sequences that are candidates for conserved gene-regulatory elements. Notably, hemichordates possess a deuterostome-specific genomic cluster of four ordered transcription factor genes, the expression of which is associated with the development of pharyngeal 'gill' slits, the foremost morphological innovation of early deuterostomes, and is probably central to their filter-feeding lifestyle. Comparative analysis reveals numerous deuterostome-specific gene novelties, including genes found in deuterostomes and marine microbes, but not other animals. The putative functions of these genes can be linked to physiological, metabolic and developmental specializations of the filter-feeding ancestor.

(b) Functional and comparative genomics
Decades of genome sequencing have revealed the striking conservation of many genomic features, such as gene family complement or gene structure. Understanding which genomic changes underpin major evolutionary transitions, such as the origin of vertebrates, remains a pivotal question. Our main questions are:
(i) the impact of whole genome duplications on genome architecture. By comparing newly chromosome-scale assembly for chordate and vertebrate genomes, we developed approaches to reconstruct gene linkage relationships, called macro-synteny, and account for chromosomal rearrangement, fusions and duplications that took place at the origin of vertebrates, and in the main vertebrates lineages, such as cyclostomes (lamprey and hagfishes), chondrichthyans (sharks and chimeras) and osteichthyans (bony vertebrates). More generally, we are interested in understanding chromosome evolution in animals, and to determine what are the possible causes of chromosomal conservation or reshuffling.
(ii) the evolution of animal genomes in a phylogenetic context. While molecular phylogeny started with a handful of marker genes, full genomes are now available for inference, but the extent of conserved genomic characters that can be used for phylogenetic reconstruction is still debated. We are both interested in resolved major phylogenetic question regarding animal evolution (position of chaetognaths, acoelomate flatworms, etc…), the palette of characters that can be used to do that (coding genes, indels, introns gain and losses, synteny) but also to study the rates of evolution of all these genomic traits in diverse metazoan lineages.
Publications

Laboratory culture of cephalopod species was originally initiated by Dr. Eric Edsinger-Gonzales at the unit’s origins. Efforts have since concentrated on identifying a sustainable model species amenable to lab culture either by direct sampling in the field or through a network of cephalopod researchers around the world. Recently, we have identified the Japanese bobtail squid Euprymna berryi as a promising model, for which we are currently developing resources.

E. berryi  been successfull bread in a closed system. Furthermore, we have succeeded in closing the life cycle of the Euprymna morsei. Finally, we have successfully bred other bobtail squids in captivity and are working to close their life cycles. 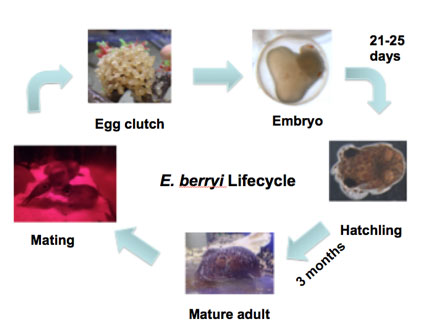 We are happy to share resources and expertise. Please contact lin.zhang1 at oist.jp  and chikatoshi.sugimoto at oist.jp in (Japanese or English) more information, any requests or comments.

Our team has investigated culture conditions (temperature, microorganism content of environment) and temperature necessary to maintain healthy and happy squid. Our team remains in contact with cephalopod bacterial symbiosis experts to ameliorate the culture conditions. In addition, we have optimised the nutritional requirements (consisting of algae and crustaceans) specific for our species’ of interest.

A state-of-the-art aquaculture system was developed in collaboration with the expertise of Bret Grasse (Marine Biological Laboratory) and Spencer Nyholm (University of Connecticut) to house different species of cephalopods across different stages of development. Water parameters (e.g., salinity, pH, NO3) are strictly controlled, and animal welfare is monitored daily by a dedicated team of scientists and aquarists.

(b) Genetic diversity of squid of the Ryukus

Bobtail, or sepiolid, squid are found in the shallow coastal waters of the Indo-Pacific.  We have been characterizing the bobtail squid of the Ryukyu archipelago to explore their morphological, developmental, behavioral and genomic diversity.  There appear to be several species of sepiolid squid unique to the Ryukyu islands, from several genera, based on genomic and morphological differences.  We have begun to characterize the genetic variation within and among these species, using genome and transcriptome sequencing.