A Campus Like No Other: OIST's Revolutionary Architecture - Featuring Kenneth Kornberg and Takashi Okamoto 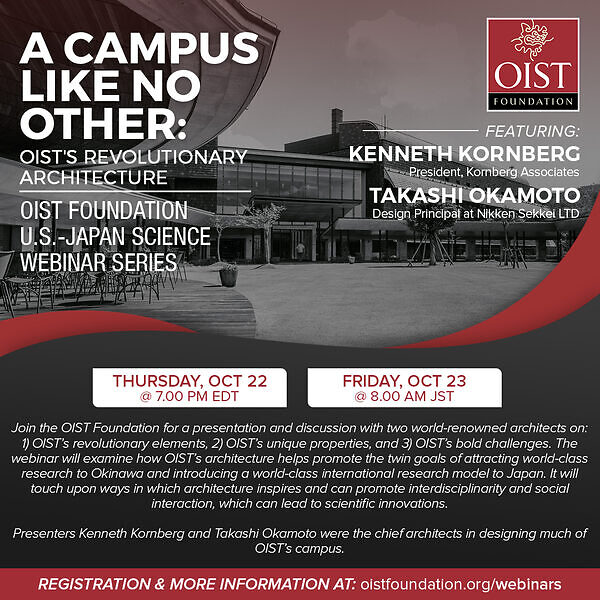 Join the Okinawa Institute of Science and Technology Foundation (OIST Foundation) for a presentation and discussion with two world-renowned architects on 1) the Okinawa Institute of Science and Technology Graduate University’s (OIST) revolutionary elements, 2) OIST’s unique properties, and 3) OIST’s bold challenges.
The webinar will examine how OIST’s architecture helps promote the twin goals of attracting world-class research to Okinawa and introducing a world-class international research model to Japan. It will touch upon ways in which architecture inspires and can promote interdisciplinarity and social interaction, which can lead to scientific innovations.

Presenters Kenneth Kornberg and Takashi Okamoto were the chief architects who designed much of OIST’s campus.
Kenneth Kornberg, President of Kornberg Associates, founded the firm in 1979 and since that time has overseen more than 600 lab projects around the world, ranging from feasibility studies to new campus designs for universities, federal/state/local governments, private research institutes and pharmaceutical companies worldwide. As a world-renowned authority on research facility design, Ken is often called upon to speak about this specialty at US and international symposia. He presented “Designing a Research Campus for the 21st Century” at The Salk Institute as part of the ANFA Interfaces series. “Green Design for 21st Century Research Facilities” was presented in Japan as part of a symposium on sustainable lab design. (The book Greener Labs, co-authored by Mr. Kornberg for a Japanese publisher, was unveiled at this symposium in both Tokyo and Osaka, Japan in 2010.) His book, Research Without Borders, was launched at a symposium in Tokyo in the fall of 2014.  His most recent book, 100 Best Lab Ideas was presented at the Japanese Interphex Lab Symposium in 2019. It is available in English and Japanese.

Mr. Kornberg has served on numerous non-profit Boards and currently serves on the Boards of Directors of the Academy of Neurosciences for Architecture and GeoHazards International.

Takashi Okamoto is President of Okamoto Takashi Architectural Design. He was previously one of the leading architects of Nikken Sekkei focusing on cutting edge IT corporate campuses, educational and research complexes, and university campus developments as well as large scale commercial development both domestic and overseas. In his projects, he leads his design team to distinguished design carefully tailored to the context of the site environment as well as the sociological aspects of the building occupants. His unique design also comes from his devotion to the environmental aspects of the building. His domestic projects include the Okinawa Institute of Science and Technology where the Japanese government seeks to establish a world-class research-oriented university. Here, his bold and innovative approach toward nature and biodiversity resulted in this cutting-edge research campus. At the Research Institute for Humanity and Nature located in Kyoto, his environmentally conscious approach resulted in the creation of a uniquely planned modern research facility in traditional Japanese atmosphere and highly energy efficient system.