[Webinar] The Neanderthals in Us: How Neanderthal Genes Influence Us Today 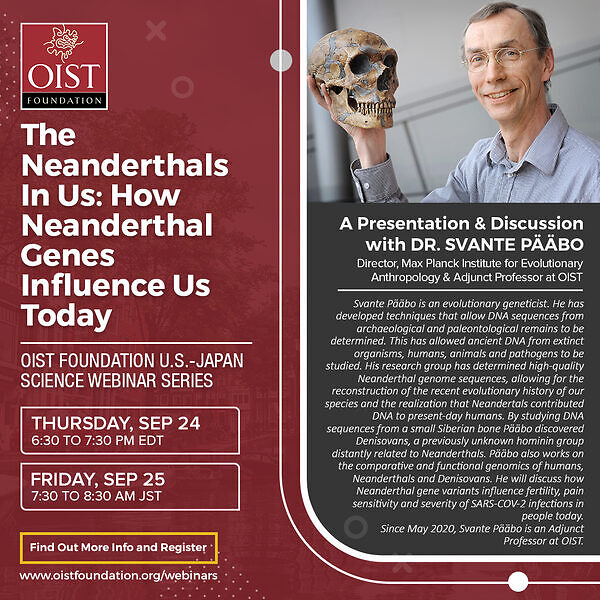 Join the OIST Foundation for a rare chance to learn how genes from Neanderthals still influence us from one of the most outstanding leaders in the field of evolutionary genetics. Dr. Pääbo will discuss how Neanderthal gene variants influence fertility, pain sensitivity and severity of SARS-COV-2 infections in people today.

Dr. Pääbo is an evolutionary geneticist. He has developed techniques that allow DNA sequences from archaeological and paleontological remains to be determined. This has allowed ancient DNA from extinct organisms, humans, animals and pathogens to be studied. His research group has determined high-quality Neanderthal genome sequences, allowing for the reconstruction of the recent evolutionary history of our species and the realization that Neandertals contributed DNA to present-day humans. By studying DNA sequences from a small Siberian bone Pääbo discovered Denisovans, a previously unknown hominin group distantly related to Neanderthals. Pääbo also works on the comparative and functional genomics of humans, Neanderthals and Denisovans.