How do typhoons affect microbes? 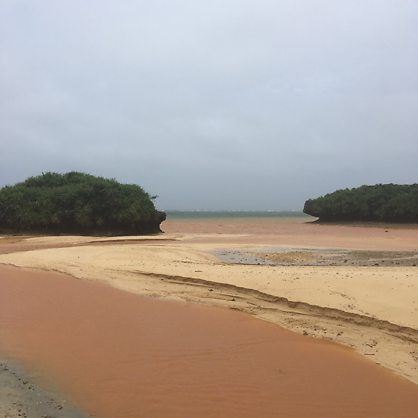 Okinawa is in the middle of a global hotspot for tropical cyclones. In fact, the region surrounding Okinawa experiences stronger and more frequent tropical cyclones than any other region in the world. Global climate change is already causing storms to become stronger and to occur more often. In the western Pacific, more storms are predicted to make landfall than ever before. Therefore, it is important to understand how these extreme storms will affect the marine organisms that live in the waters surrounding Okinawa.

Microbes, although small, play large roles in marine environments. Cyanobacteria and phytoplankton perform photosynthesis, taking energy from the sun to create fuel for the entire marine food web. Other bacteria break down organic matter, recycling nutrients back into the environment and fueling more photosynthesis. In addition, some microbes can cause disease in corals, fish, and other animals, including humans. But what happens to microbes during and after typhoons in Okinawa had not been previously investigated.

In Okinawa, the extreme rain that accompanies tropical cyclones washes large amounts of soil into the ocean. The amount of soil washed into the water is exacerbated by coastal development and agriculture that removes natural vegetation. Natural vegetation holds soil in place and allows rainwater to be absorbed by the land. Since much of the soil in Okinawa is red, due to high iron concentrations, the input of this soil into the water turns entire lagoons a deep, cloudy red color. Once in the water, soil blocks light from reaching corals and other photosynthesizing organisms. In addition, soil in the water can sink onto corals, continuing to block sunlight and causing irritation. In regard to the microbes, nutrients that are naturally in the soil and added by agricultural fertilizers can cause blooms of cyanobacteria or phytoplankton. These blooms can then affect other marine organisms, and in some cases can harm humans.

In order to understand how microbes in the waters around Okinawa are affected by tropical cyclones, members of the OIST Marine Biophysics Unit studied how microbial communities in water samples they collected during and after tropical cyclones compared to those in samples they collected right before the storms. In addition, they conducted mesocosm experiments, where they added red soil to 20-liter bottles of natural seawater and monitored how the microbial community changed over time.

The storms included in the study were tropical storm Gaemi, which occurred at the beginning of the 2018 typhoon season (June), and typhoons Trami and Kong-Rey, which occurred in close succession towards the end of the 2018 typhoon season (October). During both storms, the researchers measured an increased abundance of bacteria that are typically associated with soils. In addition, they saw an influx of bacteria that were not found in soils but that could have originated from other land-based sources, such as animal farms or waste-water treatment facilities. In the marine environment, these bacteria, Vibrio spp. for example, could cause coral disease, while others, such as Campylobacters, could make humans sick. Interestingly, the impact of the storms on the microbial community did not last long. The soil bacteria and the potential pathogens weren't present in samples collected a few days following the storms, and the bacterial communities in those samples were almost identical to the samples collected before the storms. The nutrients in storm run-off, then, did not fertilize a bloom or otherwise cause the microbial community composition to change. This could be due to the oceanographic conditions surrounding Okinawa. For example, strong currents could quickly sweep soil and nutrients away from the coast. It could also be due to the prevailing nutrient availability—coastal microbes may not be limited by nutrients carried in the run-off—or the nutrients in the run-off may not have been in a form that the microbes could use.

In the mesocosm experiments, adding soil caused an increased abundance of the same soil-associated bacteria that increased in abundance during storms, but not the potentially pathogenic bacteria. These results further demonstrate that the potentially pathogenic bacteria are not coming from soil but are coming from other land-based sources. As in the environmental observations, adding soil to the mesocosms did not cause a bloom or otherwise shift the abundance of different marine microbes. Since the soil was kept in the mesocosm bottles and was not subject to ocean currents, it seems that the marine microbes in the mesocosm bottles were not limited by nutrients in the soil or could not use the nutrients in the soil.

This study is the first to demonstrate how bacterial communities near Okinawa respond to tropical cyclones. While dangerous bacteria did not remain in coastal waters for long after storms, the researchers warn that this effect should not be discounted. Typhoons cause a lot of stress to marine organisms, which could make them especially susceptible to disease. Pathogenic bacteria in storm run-off could, therefore, cause opportunistic infections in marine organisms. In addition, residents and tourists in Okinawa should be careful swimming immediately after extreme rain, especially if they have any open cuts or scrapes. This study specifically looked at how the microbial community composition changed in response to storms, future studies are needed to understand how microbes alter their metabolism and physiology to cope with tropical cyclones.

The full study is available to read on the bioRxiv.