3.1 Quantification of connectivity in marine ecosystems around Okinawa

3.1.1 Connectivity of the Crown-of-Thorns Starfish around Okinawa

Boom and bust dynamics are a prominent characteristic of the Crown-of-Thorns Starfish (Acanthaster planci) populations. Outbreaking starfish populations damage coral communities extensively and then often disapper quickly. In contrast, Onna village, on the central west coast of Okinawa Island, Japan, has been experiencing chronically high population densities of A. planci for decades. In this study, we examined spatial and temporal population dynamics of A. planci along the coast of Onna village, using removal data gathered over 24 years by a local fisheries sooperative. The results demonstrate that A. planci populations along the Onna coast often experienced high densities prior to 2003, and that recently, populations have again been increasing drastically. Size-frequency distributions suggest multiple, successive recruitment, as one of the driving factors maintaining A. planci populations in this location. Moreover, within the Onna area, the timing of outbreak peaks varied among the different locations, showing a northward progression. 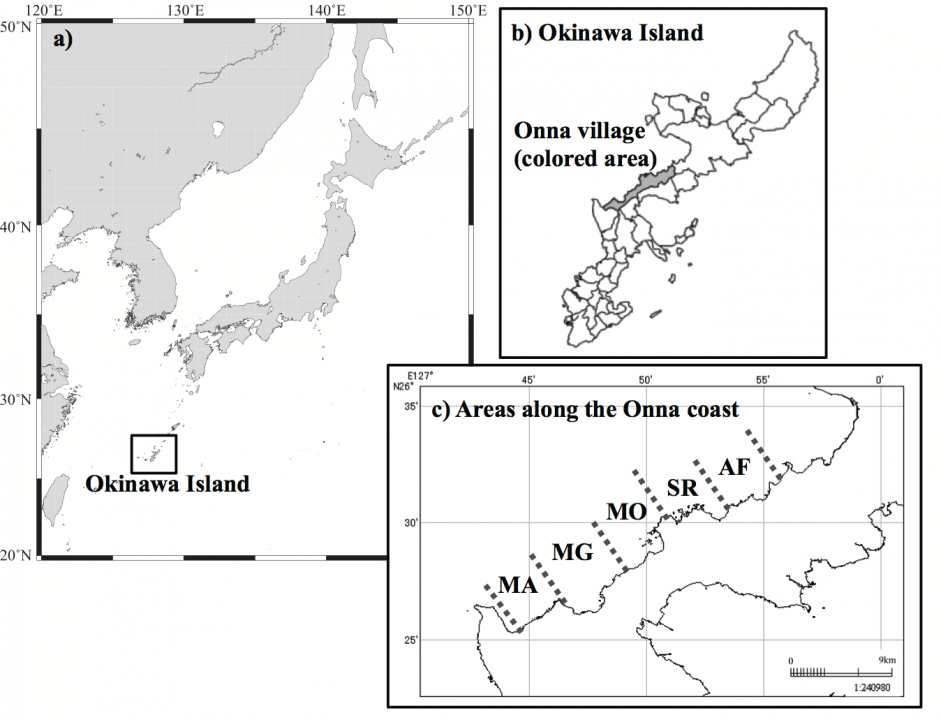 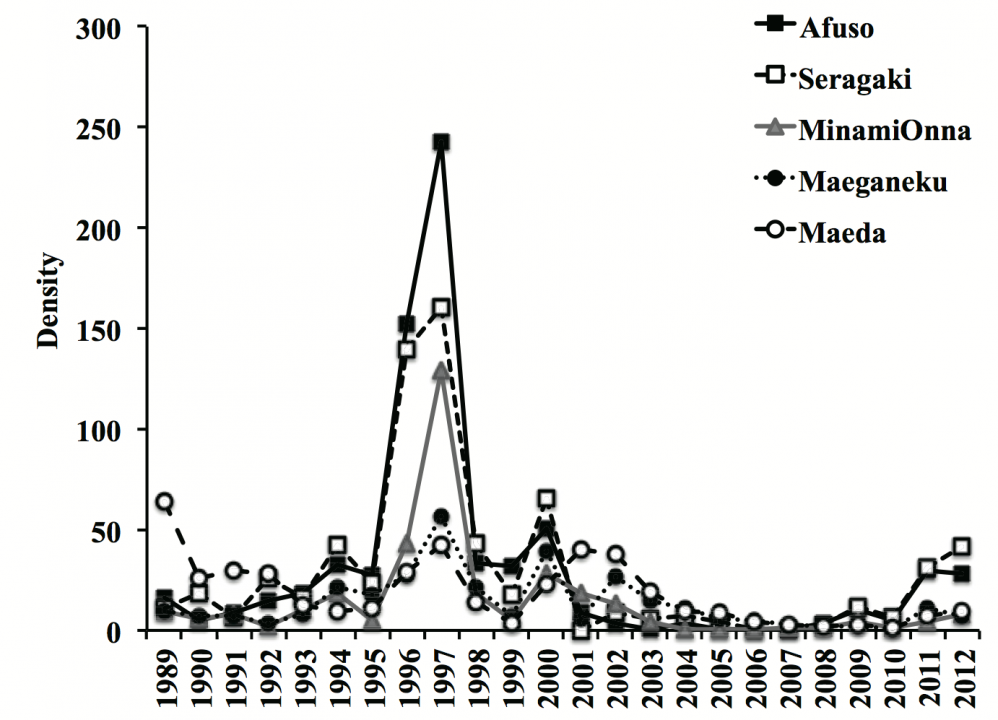 Figure 2: Densities of Acanthaster planci removed at five areas along the Onna coast from 1998 to 2012.

Computer-automated image capture and analysis techniques are increasingly used for the study of plankton. Unfortunately, because most of the automatic image processing software packages recognize only numbers of pixels and grey scale values, although a great many parameters are automatically measured on each image  (area, perimeter, average level of grey, etc….), these do not directly equate to variable that appear in the biological literature. The relationships between prosome lengths and computer-generated characters were derived from images acquired using the ZooScan system for two of the most common copepod families off south-eastern Japan: Calanoida and Poecilostomatoida. The equivalent spherical diameter (ESD), a character automatically measured by the ZooScan-ZooProcess system, was found to be highly correlated with prosome length in the two others, and a single equation could be established (regression coefficient r2=0.943) for all Calanoida excepting those of the family Eucalandiae: PL (mm)=0.08+0.023*ESD (pixels). 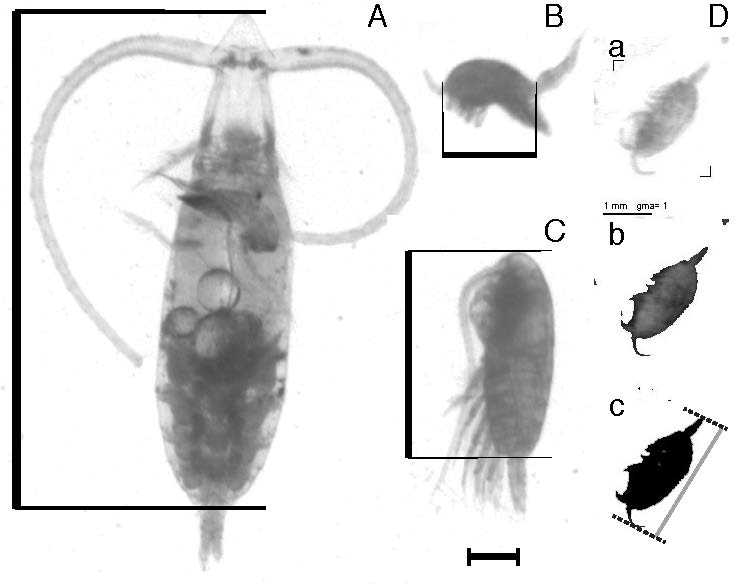 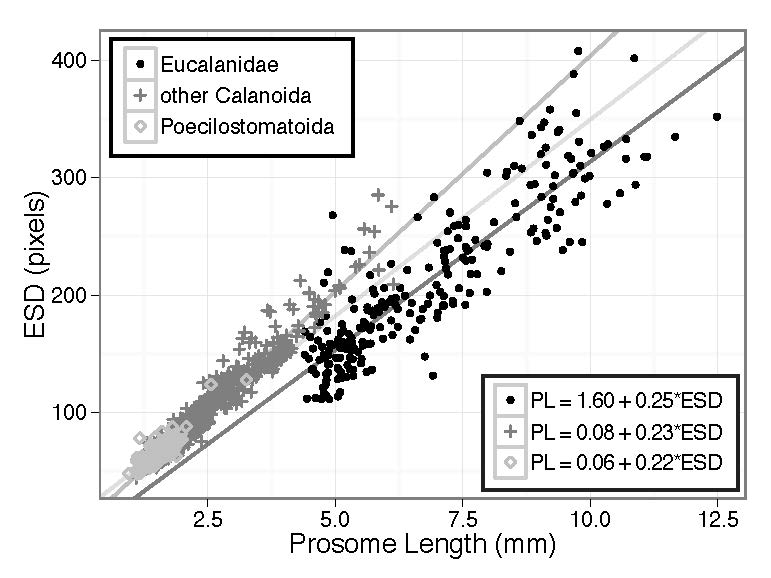 Figure 2: (Left) Illustration of the prosome length measurements applied to the calanoid family Eucalanidae (A), the order Poecilostomatoida (B), and all other calanoid copepods (C). D: Process of automatic measurement: Calanoid copepod as scanned (a), after outline (b), Area, in black, Perimeter, the contour if the black outline, and Maximum Feret's Diameter, grey line (c). All listed images were captured by ZooScan. Scale bar=1 mm. (Right) Relationships between the manually measured prosome length (PL) and the Equivalent Spherical Diameter (ESD) estimated by the ZooScan and ZooProcess system. Prosome length in mm, ESD in pixels.

Barnacles of the genus Neoverruca are abundant near deep-sea hydrothermal vents of the northwestern Pacific Ocean, and are useful for understanding processes of population formation and maintenance of deep-sea vent faunas. Using next-generation sequencing, we isolated 12 polymorphic microsatellite loci from Neoverruca sp., collected
in the Okinawa Trough. These microsatellite loci revealed 2–19 alleles per locus. The expected and observed heterozygosities ranged from 0.286 to 1.000 and 0.349 to 0.935, respectively. Cross-species amplification showed that 9 of the 12 loci were successfully amplified for Neoverruca brachylepadoformis in the Mariana Trough. A pairwise FST value calculated using nine loci showed significant genetic differentiation between the two species. Consequently, the microsatellite markers we developed will be useful for further population genetic studies to elucidate genetic diversity, differentiation, classification, and evolutionary processes in the genus Neoverruca. 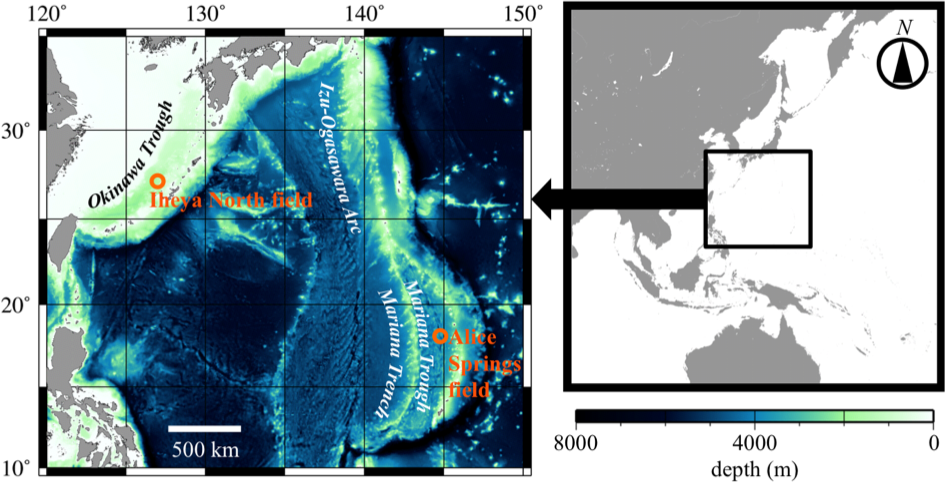 Figure 3: Sampling sites for Neoverruca. Iheya North field (for Neoverruca sp.) is located in the Okinawa Trough and the Alice Springs field (N. brachylepadoformis) is in the Mariana Trough. 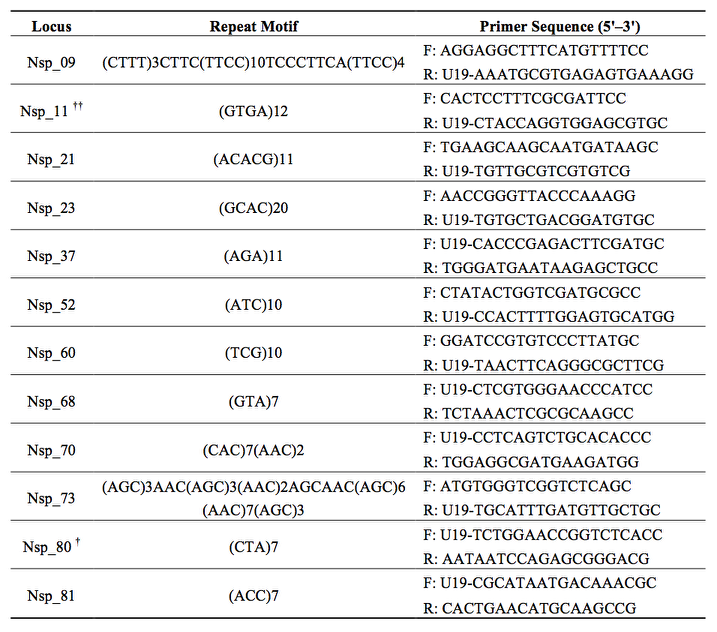