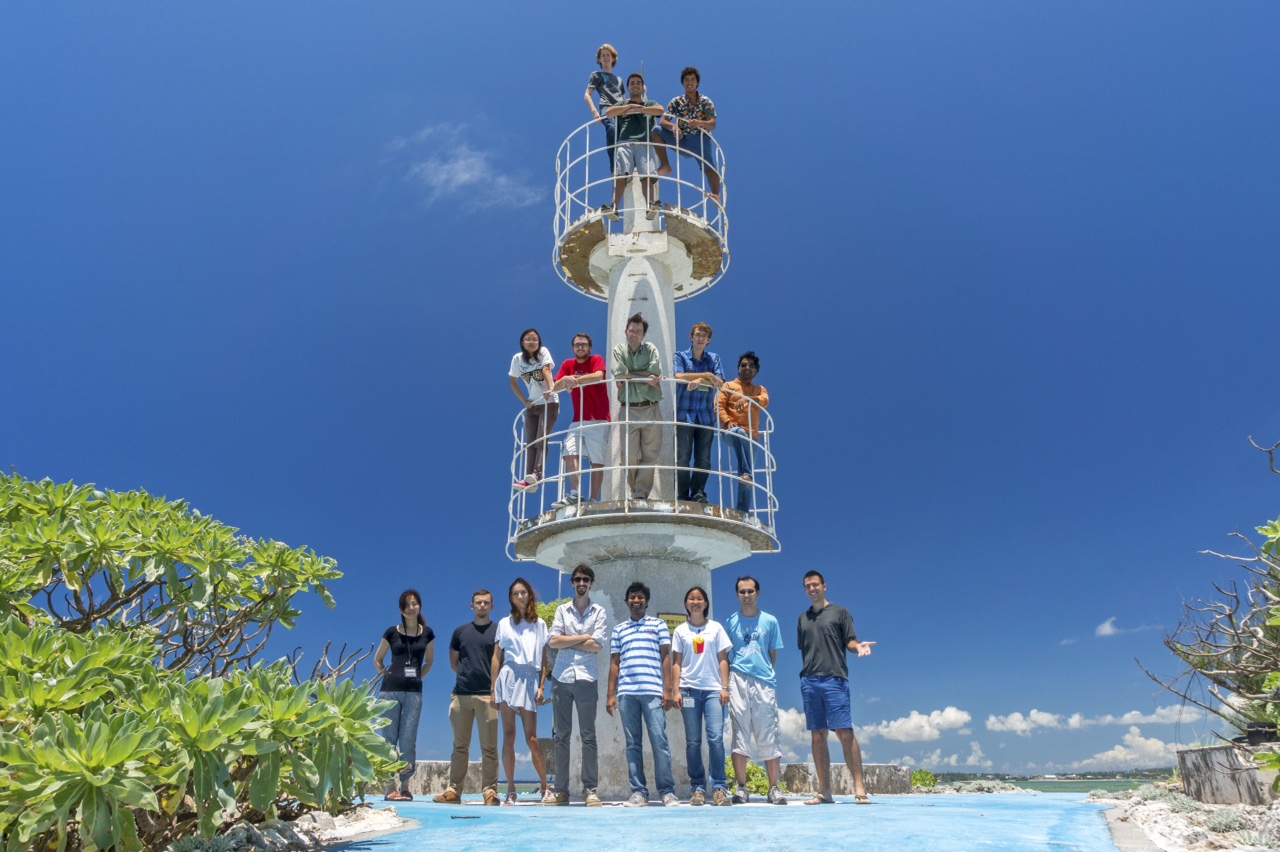 In recent years, the ability to synthesize, engineer & observe materials on the nanometer length scale has led to novel phenomena and applications. On the other hand, modern lasers deliver powerful, ultrashort pulses of light allowing us to observe the interaction of electrons and atoms on the femtosecond timescale. Together, these technologies allow us to study new paradigms in light-matter interaction – with femtosecond temporal resolution and nanometer spatial resolution. In the Femtosecond Spectroscopy Unit, we direct these abilities towards different areas of study:

(a) Novel 2D Materials & Heterostructures, where femtosecond pulses and nanoscale, biocompatible devices offer new possibilities in imaging and interacting with the brain;

(b) Femtosecond Techniques for Neuroscience & Drug Delivery, where femtosecond pulses and nanoscale, biocompatible devices offer new possibilities in imaging and interacting with the brain.

(c) Terahertz Devices and Applications, investigating the generation of broadband THz radiation and applying this to a variety of materials and devices.

Since the discovery of Graphene in 2004, the study of two-dimensional (2D) materials and their heterostructures has spawned a new field of condensed matter physics. Understanding the optical properties of these new materials, their nonlinear interaction with light, and the light-induced ultrafast dynamics of electrons in these materials has been one of the main research thrusts of the unit. In continuation of the work from previous years, the unit has made progress in the following areas in FY2014:

Graphene and its various nanostructures have gained a lot of attention due to the large range of electronic, optical, and magnetic properties they exhibit depending on size, shape, and geometry [1]. In particular, inducing and controlling the magnetic properties of graphene quantum dots (GQDs) has generated a lot of interest in recent times [2]. Various schemes have been discussed in this regard, ranging from inducing strain [3], engineering the shape and edge geometry [4], doping the carbon nanostructure with other atoms [5], to creating vacancies in the lattice [6].

Besides engineering the magnetic properties via doping, strain, and geometry, optical manipulation of magnetism would provide significant technological capability. This will result in direct applications in quantum computing [7], optical spin pumping [8], and sorting among others. Recent work has suggested ways of optical manipulation of spin magnetization in triangular zigzag graphene quantum dots [9]. In addition to spin magnetization, the ability to optically manipulate the orbital magnetization would provide new degrees of freedom and potential capabilities. Furthermore, developing optical schemes to induce orbital magnetization in nanostructures with a variety of shapes, sizes, and geometries would provide new avenues of experimental investigation. This is particularly significant given the current experimental challenges in making dots with specific geometries and edges.

In our work in FY2014, we reported [10] on the study of symmetric graphene quantum dots of different shapes, sizes, and edge structures. We classified their eigenstates based on the rotational symmetry of the GQDs. This classification leads to the identification of states with nonzero orbital angular momentum. These states exhibit Zeeman-like behavior, i.e., the energy of the state varies linearly in a magnetic field up to tens of teslas, and exhibit a large g value independent of shape, size, and edge structure. In the presence of a circularly polarized electromagnetic field, these states demonstrate anomalous optical selection rules, thereby allowing direct transitions to other states of nonzero angular momentum. The anomalous optical selection rules suggest clear ways to induce and control the magnetic moment of the GQD.

Advances in biomaterials and nanotechnology promise the ability to introduce nanoscale devices into living organisms to address, mimic and ultimately control their intrinsic mechanisms [1]. A first application of this concept has been the development of targeted, site specific drug delivery systems activated by external Stimuli [2]. For example, in nano cancer treatments [3], the dosage is delivered slowly and continuously over long periods of time at a specific location in the body [4]. Equally important to spatial control is gaining temporal, pulsatile control over the drug delivery system [5]. Numerous vital functions of living biological systems occur in a regulated, repeatable manner with natural rhythms of hours to milliseconds. Mimicking these rhythms – that are essential to life chemistry – demands pulsatile, repeatedly-releasing chemical delivery systems with the appropriate temporal profile. Previous attempts have achieved temporal control of the pulse profile on the order of hours and days, and typically employ a one-time destructive release mechanism by irreversible breakdown of the containing structure [6,7]. An important next step of development is towards sub-second control over the temporal drug-delivery profile via a non-destructive release mechanism in order to mimic faster rhythmic biological life cycles.

A particularly important subsecond biological process is the pulsed release of neurotransmitters and neuromodulators in the brain [8]. Chemical synaptic transmission rapidly transmits information between neurons to perform brain functions such as perception and motor control, and learning and memory [9]. Neuromodulators also operate on a subsecond timescales to regulate the activity of large swaths of neural tissue. Deficiencies in neurochemical signaling in the brain result in neurological disorders, such as Parkinson’s disease [10]. Although replacement therapies have been employed in such disorders, the slow absorption and diffusion of drugs has limited their application to replacement of constant background levels of the neuromodulator [11]. Better results can be expected by artificially mimicking the neurochemical signal with the appropriate temporal structure. Thus, the ability to reproduce the subsecond release of neurotransmitters and neuromodulators in the brain would be a significant step in controlling brain mechanisms, understanding brain behavior, and potentially addressing neurological diseases.

In FY2014, we demonstrated [12,13] subsecond, pulsatile, on-demand release of dopamine using a nanoscale drug delivery system, thus capable of reproducing neurotransmitter release of the brain. Using a train of femtosecond laser pulses, we stimulate robust, dopamine-filled liposome structures to repeatedly deliver pulsed dopamine concen- trations where the delivery time and the concentration are controlled simply by adjusting the intensity and exposure time to the femtosecond laser pulse train.

The terahertz (THz) region of the electromagnetic spectrum covers an important frequency range between electronics and optics [1]. Over the past decade a number of important scientific and technological applications have emerged in this region, such as low-energy spectroscopy of materials [2], biomedical imaging [3] and security applications [4]. Driven by these technological and scientific applications, much effort has been directed towards the development of THz sources and detectors with the appropriate strengths like ease-of-use, high signal to noise ratio (SNR), broad bandwidth and large peak electric fields. In FY2014, and previous years, the unit has also invested effort in the development of novel THz sources, particularly for broad bandwidth spectroscopy, or high-field nonlinear spectroscopy.

Among the variety of THz sources, amplified laser systems provide high enough peak powers such that air plasma generation and detection may be employed, providing bandwidths beyond 100 THz and electric fields into the MV/cm range [5]. On the other hand, photoconductive antennas have demonstrated being very practical in regards to generation of sub-picosecond THz pulses with high SNR when using ultrafast Ti:sapphire oscillator systems [6]. Achieving broadband emission from antennas has shown capabilities of up to 30 THz when combined with electro-optic sampling for detection and low-temperature grown GaAs (LT-GaAs) as the antenna substrate. LT-GaAs is known for providing broader bandwidths due to the faster carrier recombination for both emission and detection. In this context, semi-insulating GaAs (SI-GaAs), which is more easily accessible and less expensive, but shows longer carrier lifetimes, is usually disregarded for broadband spectroscopy applications.

In order to combine the possibility of larger spectral bandwidths and/or higher THz fields with the practicality and high SNR of photoconductive antennas, the development of new antenna geometries and system designs continues to be an active area of research. In particular, the interdigitated photoconductive antenna structure, holds much promise for achieving both of these goals. In these antenna structures, two finger-like electrodes interweave together to create a large array of THz antenna sources, constructively interfering in the far field. This structure combines the advantages of a large aperture for optical excitation and small electrode gaps. The large area allows illumination by higher power and lower repetition rate optical sources and strongly reduces diffraction of the generated THz pulses, thus avoiding the need for silicon lenses. The small electrode spacing results in faster screening of the applied electric field by the depleted photocarriers, and thereby provides a broader bandwidth THz emitter. On a practical note, the smaller electrode gap allows for the application of a lower bias voltage, achievable with standard function generators, whilst still providing electric fields near to breakdown across the electrodes. This lower bias voltage in turn allows for higher frequency modulations of the antenna to improve the high SNR. This design allows for significantly higher peak THz electric fields compared to dipole antennas or large-aperture antennas.

In FY2014, we reported [7] broadband THz emission, up to 20 THz, is measured from an interdigitated photoconductive antenna fabricated on a SI-GaAs wafer, optically excited by a high power and low repetition rate Ti:sapphire oscillator. The emission is investigated as a function of incident power and incident pulse width. A transmission measurement through a 75 μm, Teflon (PTFE) sample is performed to demonstrate spectroscopy up to 17 THz, and compared to a Fourier transform infrared spectrometer (FTIR) transmission measurement of the same sample. This is, to the best of our knowledge, the highest generated bandwidth reported for a SI-GaAs based photoconductive source.