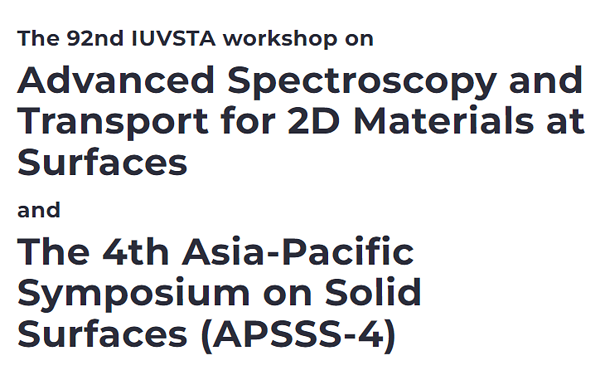 The 92nd IUVSTA workshop on Advanced Spectroscopy and Transport for 2D Materials at Surfaces & The 4th Asia-Pacific Symposium on Solid Surfaces (APSSS-4) will take place at the OIST Conference Center 18 - 21 September, 2022.

The topics discussed in the workshop include the following highly advanced subjects of surface physics/science and nanoscale science:

Topological materials
Motivated by the first demonstration of quantum anomalous Hall effect, ferromagnetic/topologocal insulator (TI) hybrid systems are one of the hot subjects in this category. The subjects, such as Majorana bound states based on TI, Wyle semimetals, topological crystalline insulator, and antiferromagnetic topological insulator, will also be agenda. Further understandings in their physics and collaborations will be sought through the discussion.

2D Xene materials
After the successful fabrication of graphene, various elemental monolayer series; Xenes, such as silicene, germanene, borophene, stanene etc. have been successfully fabricated and its unique structural, electronic, and topological properties have been discussed. Twisted bilayer graphene is another attractive subject in this workshop as it exhibits superconductivity and quasicrystalline electronic states depending on the rotational angle.

One-dimensional metallic states
One-dimensional (1D) metallic states realized on surfaces is a rich source of the relevant physics, and the exploration through the discovery of metal-insulator transition of 1D In atomic chains at low temperature was initiated. Whether the 1D states are described with Tomonaga-Lattinger liquid (TLL) has been discussed. Edge states at steps and domain boundaries of 2D TI such as Bi and transition-metal dichalcogenide and their TLL properties are a subject of extensive discussion in this workshop.

Organized by:
The Japan Society of Vacuum and Surface Science (JVSS)

Sponsored by:
The International Union for Vacuum Science, Technique and Applications (for IUVSTA Workshop)
Japan Society for The Promotion of Science (for APSSS-4)
Okinawa Institute of Science and Technology (OIST)