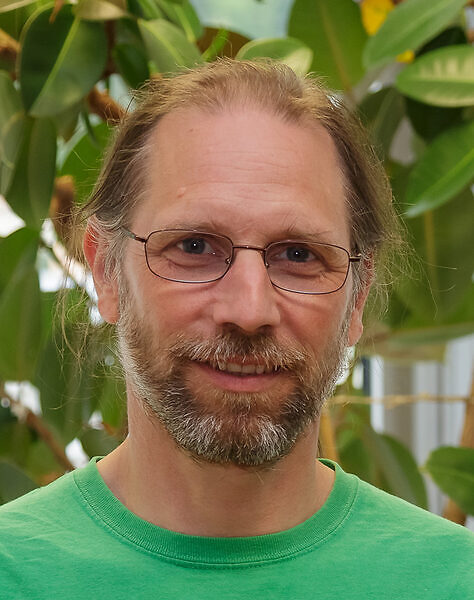 We trap single to few electrons in a millimeter-sized quadrupole Paul trap driven at 1.6 GHz in a room-temperature ultra-high vacuum setup.
Electrons with sub-5 meV energies are introduced into the trap by near-resonant photoionisation of an atomic calcium beam and confined by microwave and static electric fields for several tens of milliseconds. A fraction of electrons remains trapped and shows no measurable loss for measurement times up to a second. Electronic excitation of the motion reveals secular frequencies from several tens to hundreds of MHz.
Operating an electron Paul trap in a cryogenic environment may provide a platform for all-electric quantum computing with trapped electron spin qubits.

Hartmut Häffner is an Associate Professor for Physics at UC Berkeley. Häffner received his PhD from the University of Mainz/Germany for measuring the modified magnetic moment of an electron bound to a Carbon nucleus to nine digits thereby testing quantum electrodynamics in strong electric fields. As a postdoc at the NIST laser trapping group with William Philipps he worked with Bose-Einstein condensates and observed dynamical tunneling. In 2001, he took on a position as a research staff member in Rainer Blatt's group at Innsbruck to implement quantum algorithms and to study how quantum computers might be realized with trapped ions. Hallmarks of his work at Innsbruck were the realization of a universal set of quantum gates, teleportation of quantum states between two ions as well tomography of an eight-particle entangled state.

From 2009 on at UC Berkeley, his group develops novel quantum computing technologies and applies those tools to fundamental questions in physics. The Häffner-group investigates trapped electrons as a novel qubit candidate and uses an ion trap set-up with innovative analytical and surface cleaning tools to reduce surface noise. The group also studies many-body physics with ultra-cold ion rotating rings and strings, for instance, by simulating vibrationally-assisted energy transfer relevant for photosysthesis on a small ion-trap quantum processor. Finally, the Häffner-group applies their quantum information expertise to precision measurements and tests of fundamental symmetries, such as searching for Lorentz symmetry breaking via a Michelson-Morley experiment for electrons.