Many of the research projects conducted in the Evolutionary Neurobiology Unit is aimed at elucidating the origins of animal systems and how key processes in their early evolution were established at the molecular and genetic levels. Specific targets of our research include the genetic and physiological features of neurons and other basic animal cells (glia, muscles, digestive cells, etc.) in the ancestral animals and early evolutionary processes of body axes and germ layers, which are fundamental to shape the multicellular animal individual.

These are biologically important issues, and although various hypotheses have been proposed over the years, there are still many unanswered questions. In our unit, we will unravel the secrets of the "birth of animals", that happened around 600 million years ago, by constructing a new systematic approach using state-of-the-art mass spectrometry, bioinformatics, and gene function analysis techniques for a group of primitive, and thus phylogenetically important, animal lineages (e.g., ctenophores and cnidarians). To further strengthen our study, we have started collaborations with marine biologists and AI researchers.

The physiological feature (e.g. neurotransmitters) of neurons in the first animal remains unknown. Among neurotransmitter systems commonly functioning in bilaterians and cnidarians, the neuropeptide system has long been assumed to be related to the ancestral nervous system. Genome-wide surveys have been carried out in the basal animals to describe the complete set of neuropeptide genes. However, peptide prediction is still largely based on the structural features of bilaterian peptide precursors, hence providing only a few candidate genes for short neuropeptides of basal animals.

We had conducted a large scale and comprehensive mass spectrometry analysis to identify neuropeptides in basal animals including Cnidaria, Ctenophora, and Porifera. In 2020, we performed in-depth data analysis to further elucidate molecular properties and evolutionary aspects of newly identified neuropeptides. This analysis led to the identifications of cleavage sites commonly used in the Cnidaria and Ctenophora (Figure 1). Further, the precursor structures of the newly identified neuropeptides were subjected to large scale all-to-all homology search together with thousands of other neuropeptide precursors in the animal kingdom. Graph-based analysis indicated that the Ctenophora neuropeptides make unique cluster and not showing structural similarities to any other families in animal kingdom. These results illustrate that structural variation of neuropeptides had rapidly evolved, whereas the core molecular mechanisms such as precursor cleavage were strictly conserved during animal evolution. 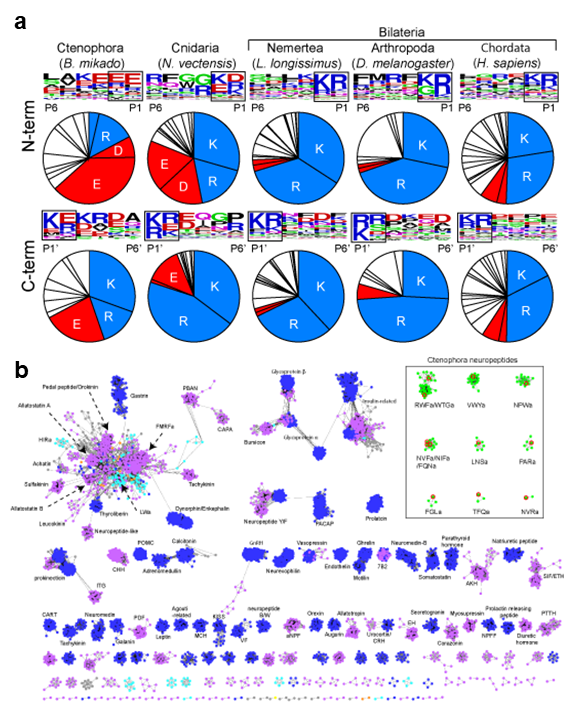 The invention of a nervous system was a key event in evolution, allowing animals to perceive their environment and respond in appropriate ways. In the nervous system, information is exchanged between neurons via specialized structures called synapses. However, little is known about how the synaptic transmission first evolved. In this project, we focus on core and evolutionarily conserved presynaptic cell adhesion molecules (psCAMs) that have critical roles in bilaterian chemical synapse. In Cnidaria, the closest outgroup to Bilateria, psCAM homologs became fully integrated into a subset of neurons (Figure 2). We performed siRNA-mediated gene knockdown (KD) experiments to understand what the function of some psCAMs in Nematostella (Cnidaria). Gene KD of neuron-specific psCAM1 or psCAM2 didn’t affect anatomical architecture of the psCAMs/PRGa-positive neurons (not shown), but did result in a reduced rate of radial contractions, suggesting synaptic functions of these proteins. Interestingly, PRGa-KD didn’t mimic the psCAMs-KD phenotype. This may suggest that psCAM-dependent neural activity is not required for the peptide nervous system, but probably for the other neurotransmission. The synaptic function of psCAM proteins is currently being investigated in more detail. 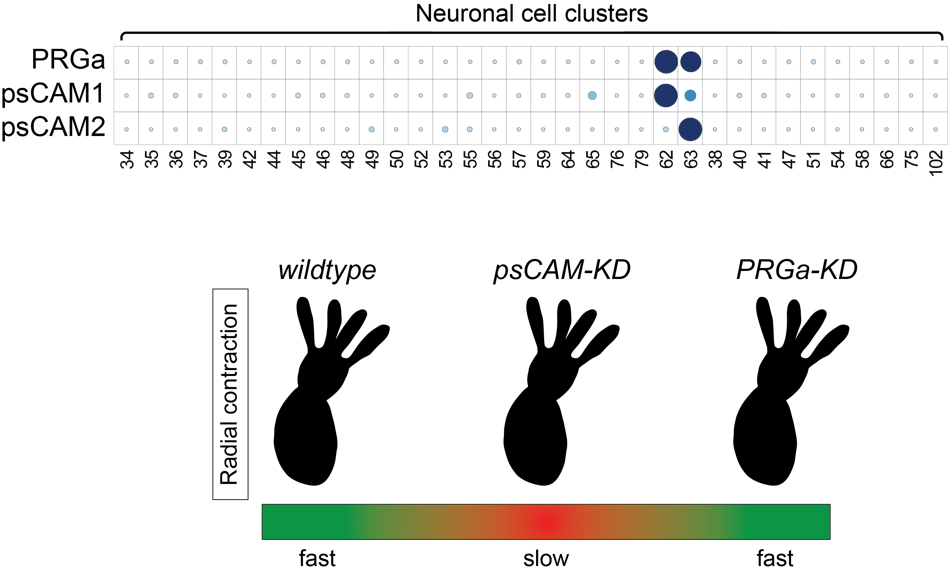 Figure 2. (top) Expression distribution of a neuropeptide (PRGamide)-precursor gene and neuronal psCAM homologs in the scRNA-seq data of adult Nematostella vectensis (Cnidaria). (bottom) Gene knockdown of psCAM1 or psCAM2 resulted to a reduced rate of radial contractions. Meanwhile, knocking down PRGamide, a neuropeptide expressed in psCAM-expressing cells (C62 and C63), did not produce the same phenotype.

The nervous system of the ctenophore, the most ancient animal, remains enigmatic. The lack of neuronal character comparable to nervous systems of other animals like Cnidaria and Bilateria has led to a debate “Is the ctenophore neuron was evolved independently?”. One efficient way to address this important biological question is to understand the neuronal charactors of ctenophore neurons, and analyze the neurogenic mechanism and comparing it with that of Cnidaria/Bilateria. To do this, we have been analyzing the function of the putative neurogenic transcription factor (TF), which is evolutionarily conserved in Cnidaria/Bilateria using a Japanese ctenophore species, Bolinopsis mikado (Figure 3). We fortunately have identified a number of neuropeptides in Ctenophora (see 3.1). Using the neuropeptides as the definitive neuronal markers, we found that one of putative neurogenic TFs is highly enriched in the neuropeptide-positive cell cluster. Knockdown of this TF led 139 and 42 genes down- and up-regulation, respectively (Fig. e-h). We now are analyzing genes to identify the function of target TF and ultimately ctenophore neurogenic mechanisms. 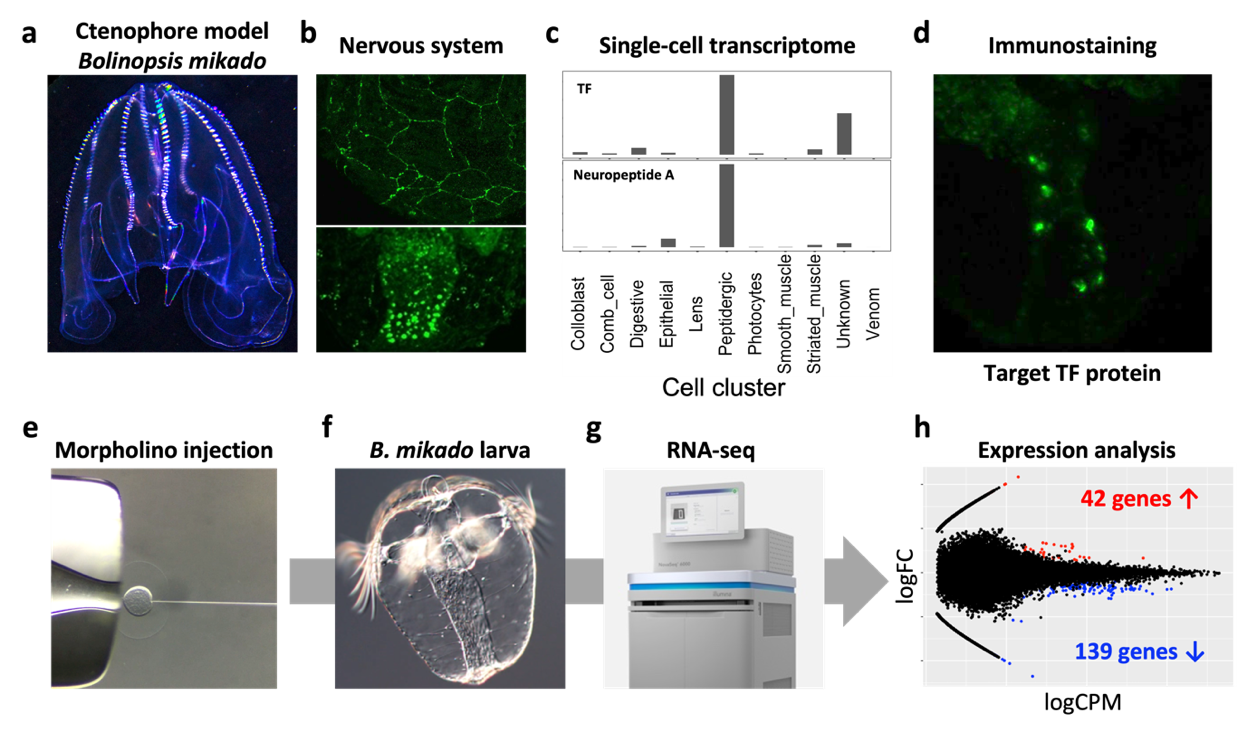 The nervous system of bilaterian animals is generally composed of neurons and glial cells. The evolutionary roots of glial cells remain obscure. Histological examinations have not so far revealed any morphological sign of glial cells in Cnidaria. This led to the hypothesis that glial cells appeared with the centralization of the nervous system after the common bilaterian ancestor had branched off from Cnidaria (Figure 4, left). However, this view has not been well examined at the genetic level. All the transcription factors (TFs) and signaling pathways driving gliogenesis in Bilateria are present in the genome of Cnidaria (Nematostella) (Figure 4, right). Using Nematostella as a cnidarian model organism we are exploring the functions of the conserved bilaterian gliogenic TFs in order to shed light on the evolutionary processes of glial cells.

3.5 Evolution of the neural centralization

It is still largely unknown whether ancestral bilaterian had a central nervous system (CNS) or not. Most of the small marine invertebrates develop a neuronal cluster around the oral/esophagus region (e.g. circumopharyngeal neurvous system: CirNS) (Figure 5), suggesting a possible architecture of the “minimum brain”. In order to examine the evolutionary conservation of genetic mechanisms required for the development of cnidarian CirNS, we performed a genome-wide analysis to characterize genes involved in the cnidarian CirNS development. In 2019, we identified 7 cnidarian transcriptional factors (TFs) which are highly conserved in bilaterian CNS, and performed a series of siRNA-mediated knockdown (KD) experiments using N.vectensis, the cnidarian model. In FY2020, we performed RNA sequencing analyses of cnidarian larvae where expression level of specific TF is reduced. We found that 49 % of downregulated differential expression genes (DEGs) are related with transcription and neuron transmission/signaling at the oral region, suggesting a requirement of the TF in the CirNS development. We are now analyzing the function of the CirNS to decipher early evolutionary process of neural centralization. 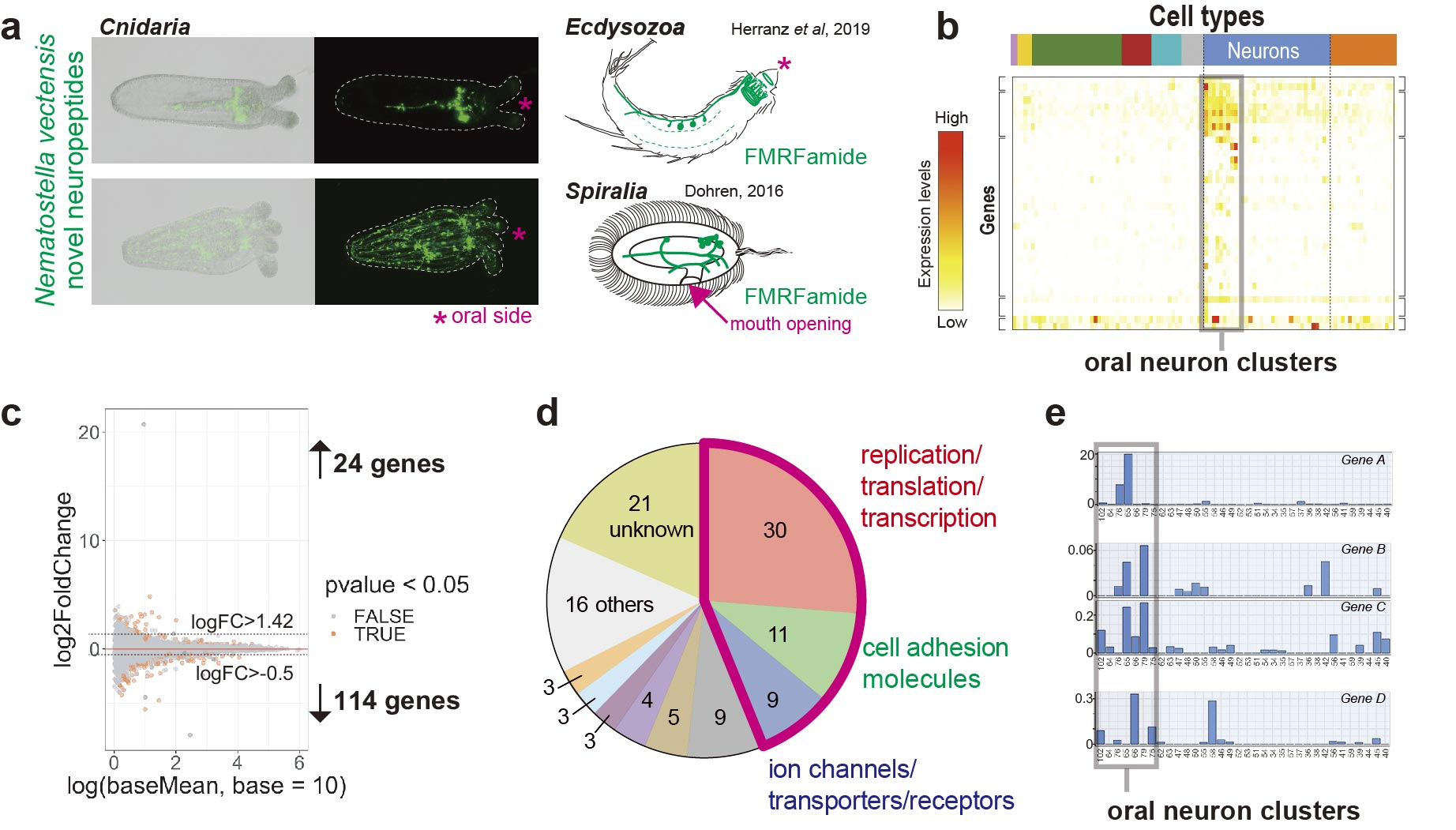