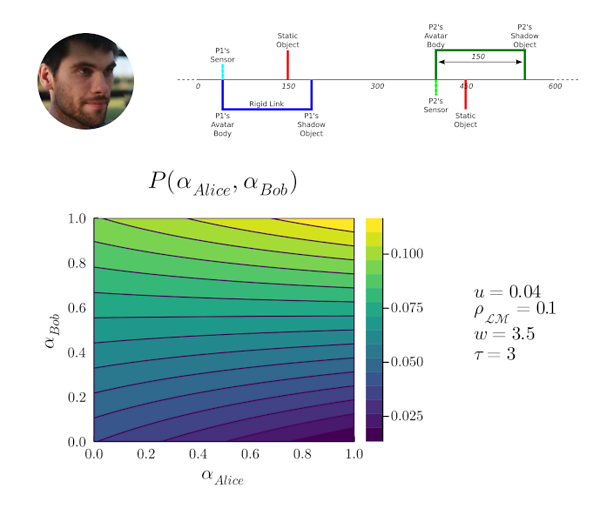 The conceptual foundations, features, and scope of the notion of rationality are increasingly being affected by developments in embodied cognitive science. This talk proposes an empirically driven debate between embodied rationality and classical rationality.

To do so, I develop a game theoretic description of a minimal interaction setup, and compare embodied rationality to game theoretic approaches to human behaviours in this setup. The Perceptual Crossing Paradigm is a minimal interaction interface where two participants each control an avatar on a shared virtual line, and are tasked with cooperatively finding each other among distractor objects. It is well known that the best performance on this task is obtained when both participants let their movements coordinate with the objects they encounter, which they do without any knowledge of efficient strategies in the system. A game theoretic model of this paradigm shows that it can be described as an Assurance game, with which we can compare game theoretical approaches and embodied rationality on two main fronts. First, accounting for the way participants solve the Assurance game; second, accounting for the evolution of choice landscapes resulting from evolving normative realms in the task. Similarly to the series of paradoxes which have fuelled debates in economics in the past century, this analysis aims to serve as an interpretation testbed for the current debate on rationality.

Sébastien Lerique is a Postdoctoral Scholar in the Embodied Cognitive Science Unit. With a background in mathematics, cognitive science, and anthropology, he studies the way human interactions are made by an unfolding of the coupling between brains, bodies and the environment. He is currently studying how two people interacting with each other in minimal environments become coupled at both the brain and physiological levels. This leads the "Real-Time Social Interaction System" Proof-of-Concept project in which one- or two-dimensional haptic environments are used to study dyadic interaction patterns.

Stepping back from minimal environments, he is interested in (1) the implications of such coupling for the design of technologies that support interactions up to languaging, instead of controlling them; (2) the contributions this provides to our understanding of human experience and individuation over time.