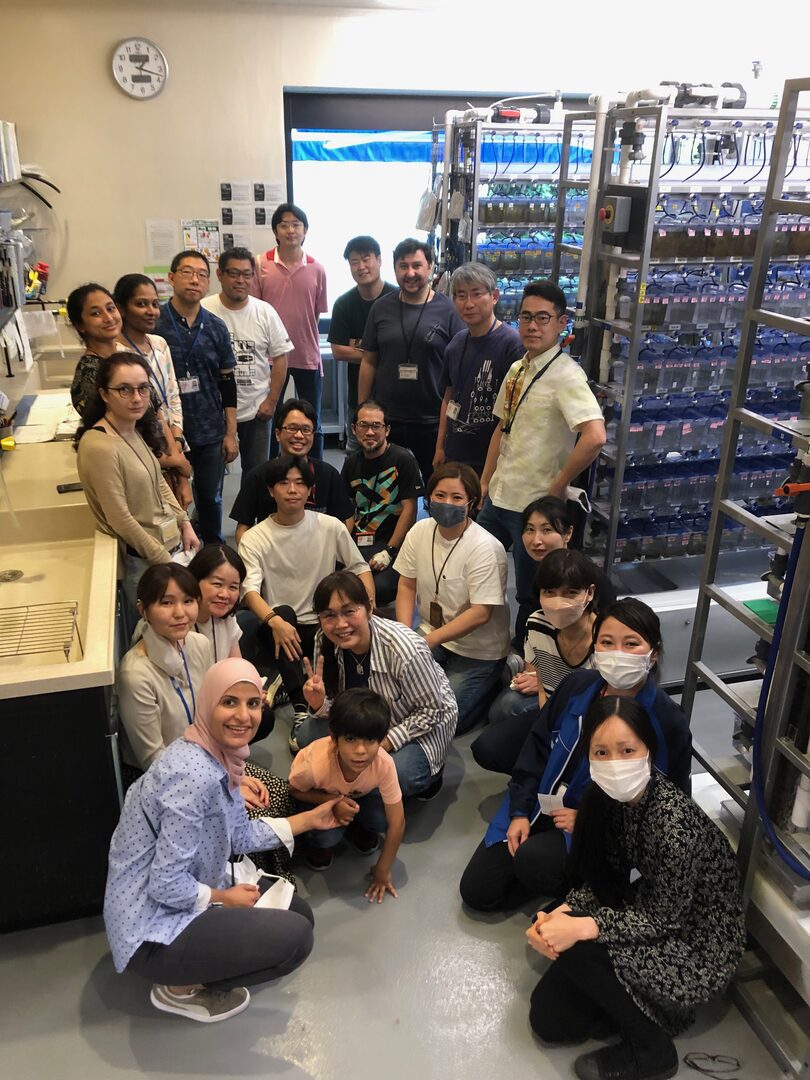 During development, the retina is originally derived from the anterior neural plate. In the retinal region, six major classes of neurons and one types of glial cells differentiate to form the neural circuit, which is responsible for phototransduction and visual processing (Fig. 1). The retinal neural circuit processes visual signals through two synaptic neuropils. At the apical side, the outer plexiform layer (OPL) harbors synapses that transmit input from photoreceptors (PRs) in the outer nuclear layer (ONL) to bipolar (BP) and horizontal cells (HCs) in the inner nuclear layer (INL). At the basal side of the retina, the inner plexiform layer (IPL) is densely packed with synaptic connections formed between BPs and amacrine cells (ACs) in the INL, and retinal ganglion cells (RGCs) in the ganglion cell layer (GCL). The retina contains one type of glial cells called Müller glia (MGs), which span the apico-basal axis of the retina. However, molecular mechanism underlying retinal neural circuit formation remains to be elucidated. In FY2021, we investigated retinal phenotypes of zebrafish strip1 mutants, in which IPL formation is disrupted.

3.1.1 The role of Strip1 in inner synaptic layer formation

Zebrafish strip1 mutants were identified by zebrafish large-scale mutant screening, which we conducted from 1998 to 2004 (Masai et al., 2003). strip1 mutants shows defects in retinal layer organization, especially IPL (Fig. 2A). IPL is formed by three retinal neurons, RGCs, ACs and BPs. These neurons show an abnormal patterning of dendrites and axons, suggesting that Strip1 is required for proper neurite patterning of these neurons (Fig. 2B). Our cell transplantation analysis revealed that neurite patterning of ACs and BPs is regulated in a cell-non-autonomous manner, indicating that Strip1 does not function in ACs and BPs but rather in RGCs. Indeed, RGCs undergo apoptosis during their maturation in strip1 mutants, which allows ACs and BPs to infiltrate into dying RGC layer (Fig. 2C). This abnormal infiltration of ACs and BPs into RGC layer causes defects in IPL formation. Thus, Strip1 is primarily required for RGC survival. 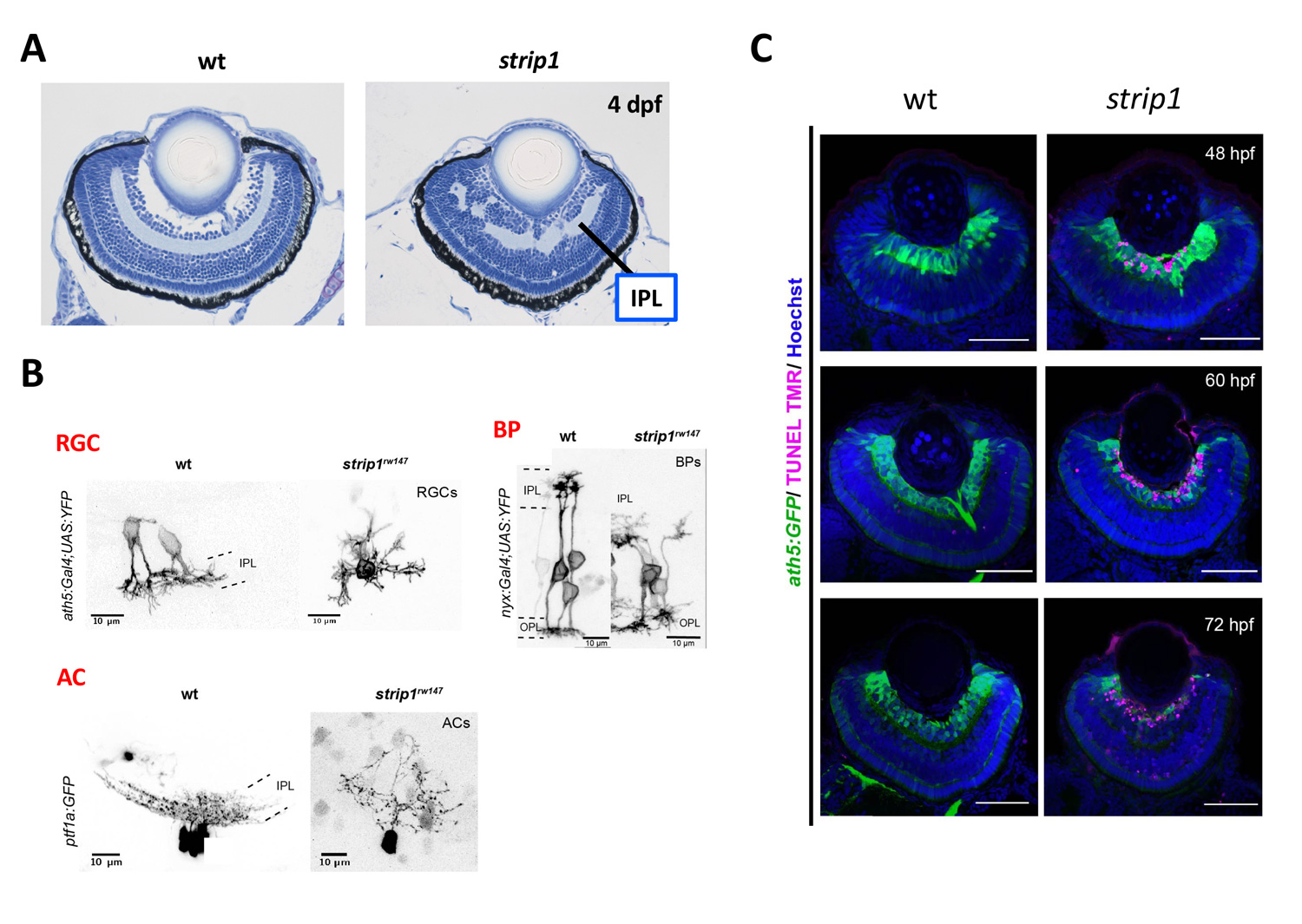 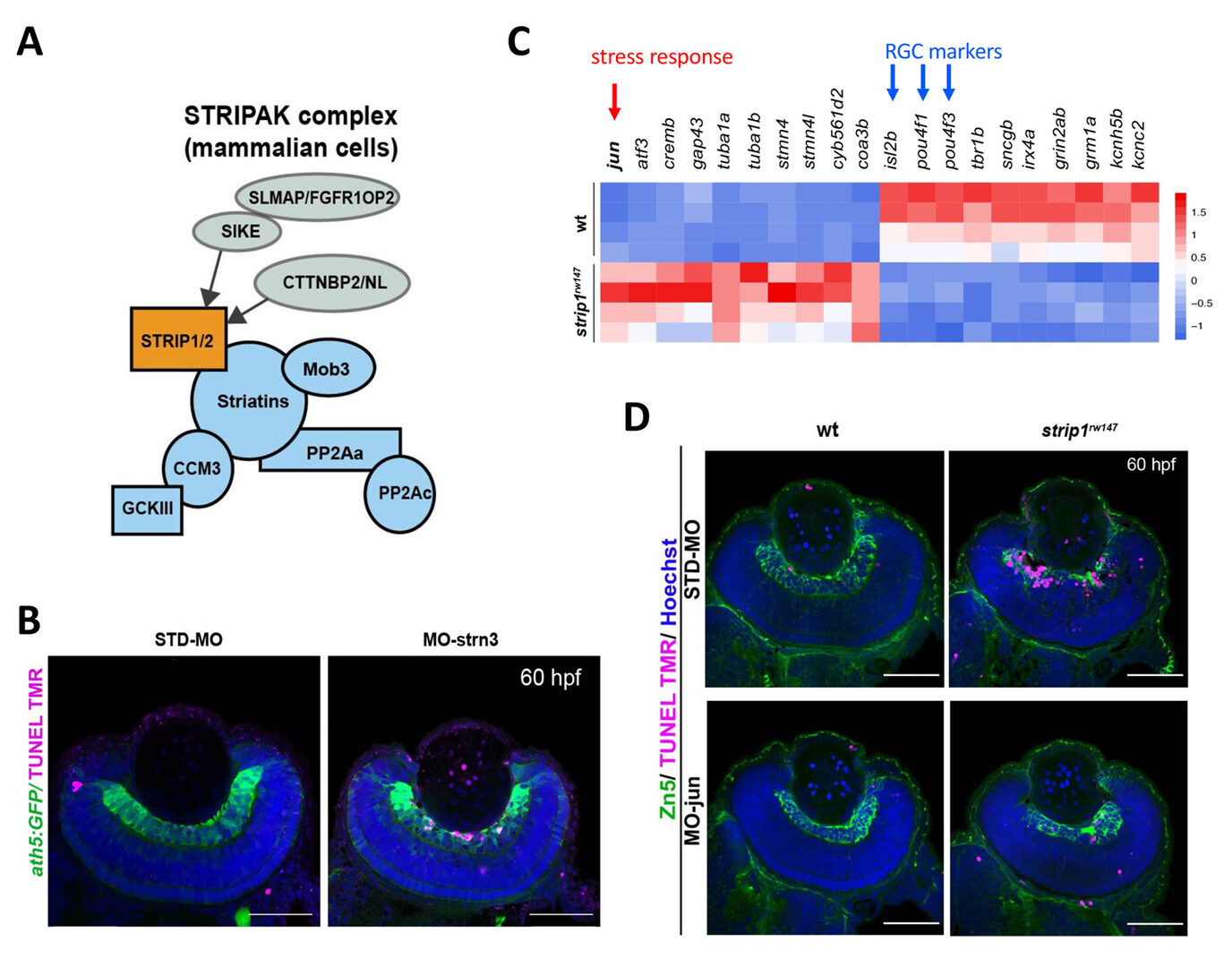 Lastly, to elucidate whether IPL formation defects in strip1 mutants depend on only RGC death, we prevented RGC apoptosis in strip1 mutants by overexpression of anti-apoptotic protein, Bcl2. Bcl overexpression rescued RGC death in strip1 mutants (Fig. 4A). We found that AC infiltration into RGC layer is inhibited in Bcl2-overexpressing strip1mutants; however, IPL fails to be formed at the interface between RGCs and ACs but formed at the intermediate position within AC layer (Fig. 4B). We also confirmed that these survived strip1 mutant RGCs show an abnormal patterning of dendrites and axons, indicating that Strip1 is required for proper neurite patterning of RGCs independent of RGC survival, which allows RGCs interacts with ACs to initiate IPL formation program. These data suggest dual roles of Strip1 in IPL formation: (1) RGC survival and (2) RGC neurite patterning (Fig. 5). 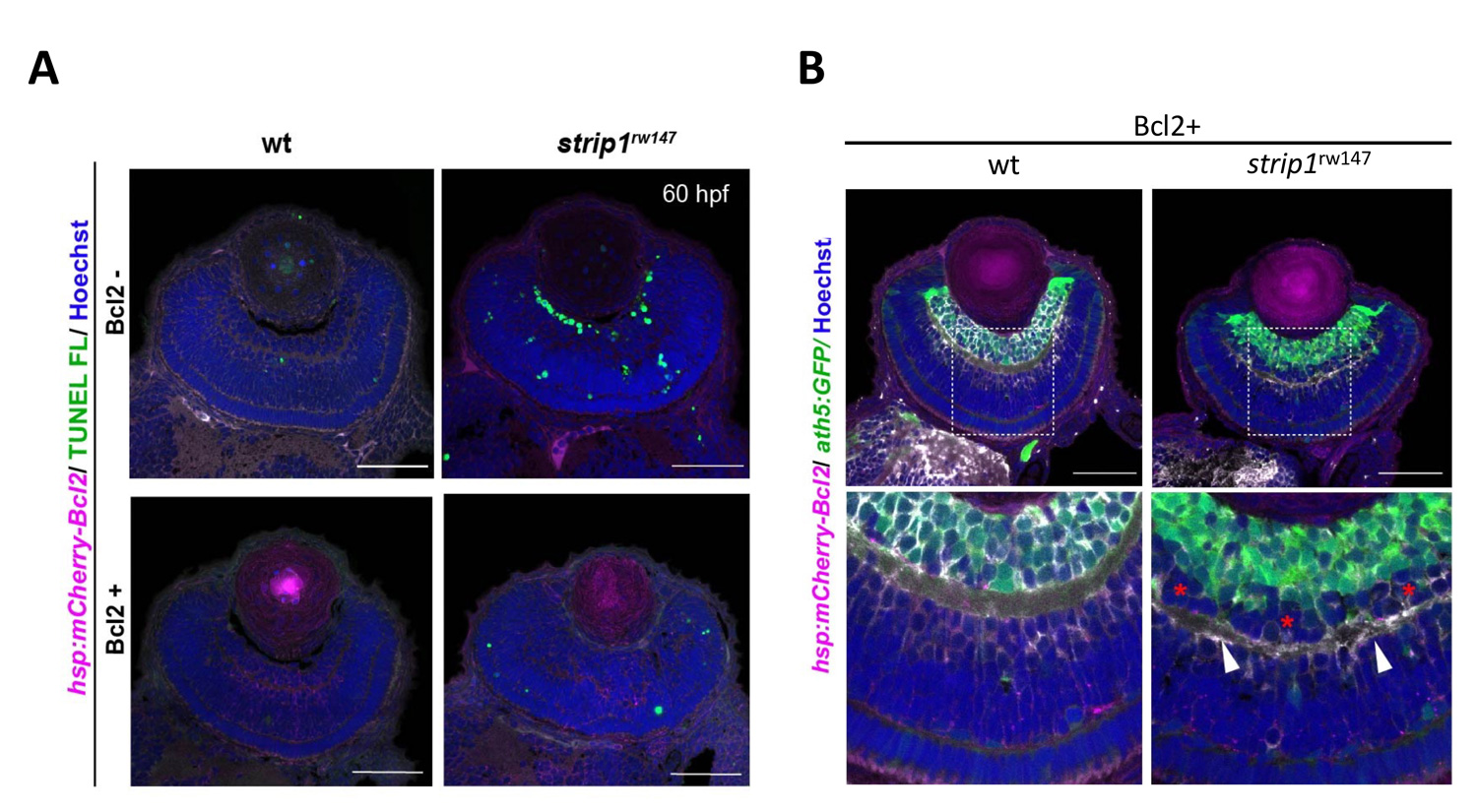 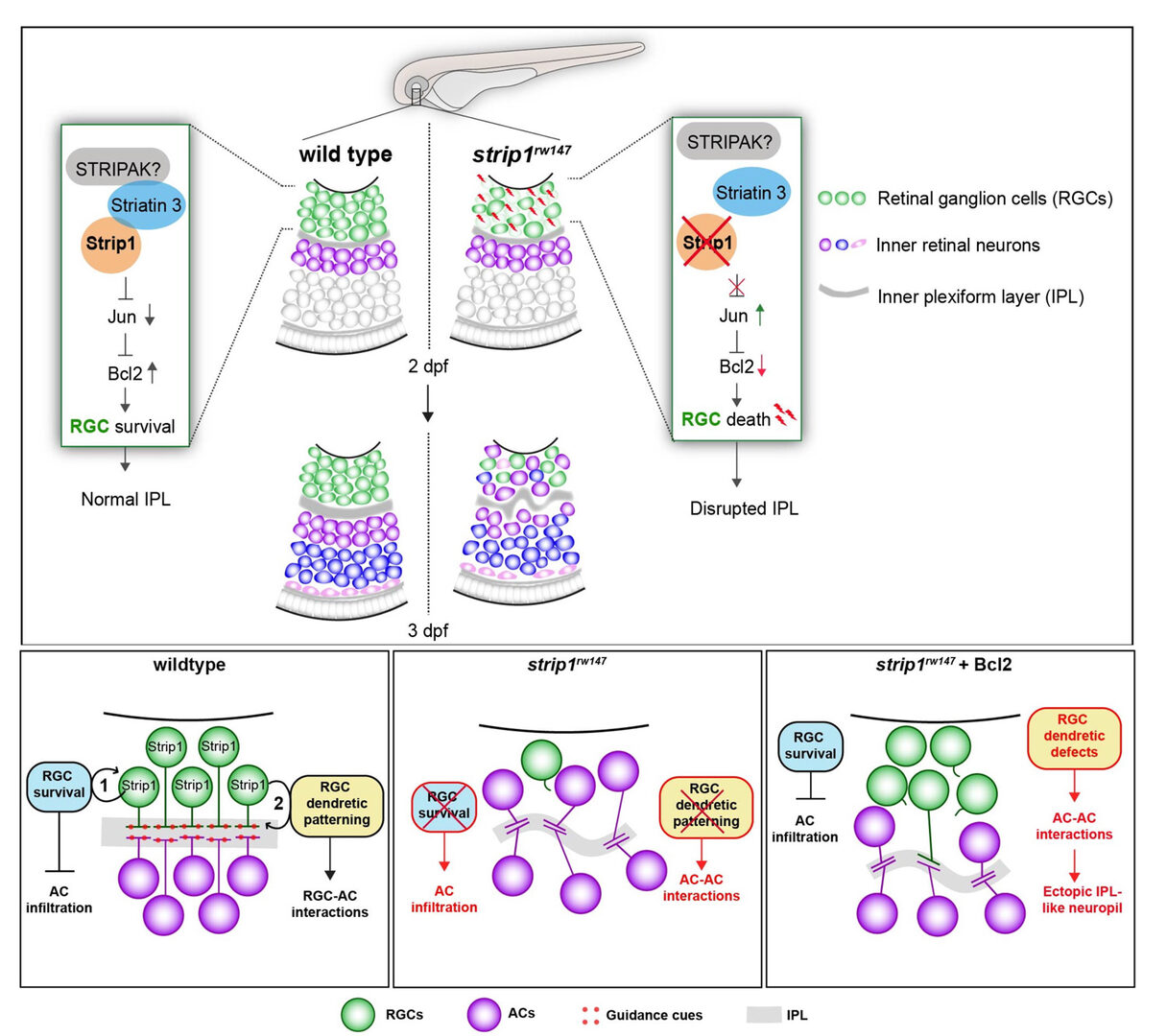 In FY2021, we examined normal developmental profiles of microglia and their colonization mechanism to the zebrafish retina. It was reported that microglia are initially generated in lateral plate mesoderm, but that they move to yolk, and enter the brain, including the eyes during zebrafish development (Herbomel et al., 2001). However, it is unknown what kinds of guidance cues enable microglia to move from yolk into developing retina, how microglia are integrated into retinal neural circuits, and also how much cell proliferation contributes to the number of microglia colonizing the retina during development.

To answer these questions, we conducted time-lapse observation using zebrafish mpeg1:GFP or mfap4:tdTomato transgenic lines, which specifically visualizes microglia in zebrafish (Ellett et al., 2011; Walton et al., 2015). We found that microglia progressively enter the optic cup from 24 to 54 hpf through the ventral optic fissure (Fig. 6A). Intraocular blood vessels initially form from the ventral fissure and then expand near the lens, suggesting an overlap with the microglia colonization route. Indeed, microglia are associated with surfaces of intraocular blood vessels. Furthermore, blockade of blood vessel formation reduced the number of microglia in the retina (Fig. 6B), suggesting that blood vessel plays a role in guidance scaffold. We also found that microglia enter the neural retina mainly through the retinal neurogenic area (Fig. 6C). These data suggest that neurogenesis functions as a gate that allows microglia to move into the neural retina. It was reported that brain-derived interleukin 34 (IL34) and its receptor, colony-stimulating factor 1 receptor a (csf1ra) regulate colonization of microglia in zebrafish brain and eye (Wu et al., 2018). We confirmed that IL34 is required for microglia colonization into the retina. Thus, our findings suggest a step-by-step guidance mechanism by which microglia move from yolk into the optic cup and colonize the neural retina (Fig. 6D). 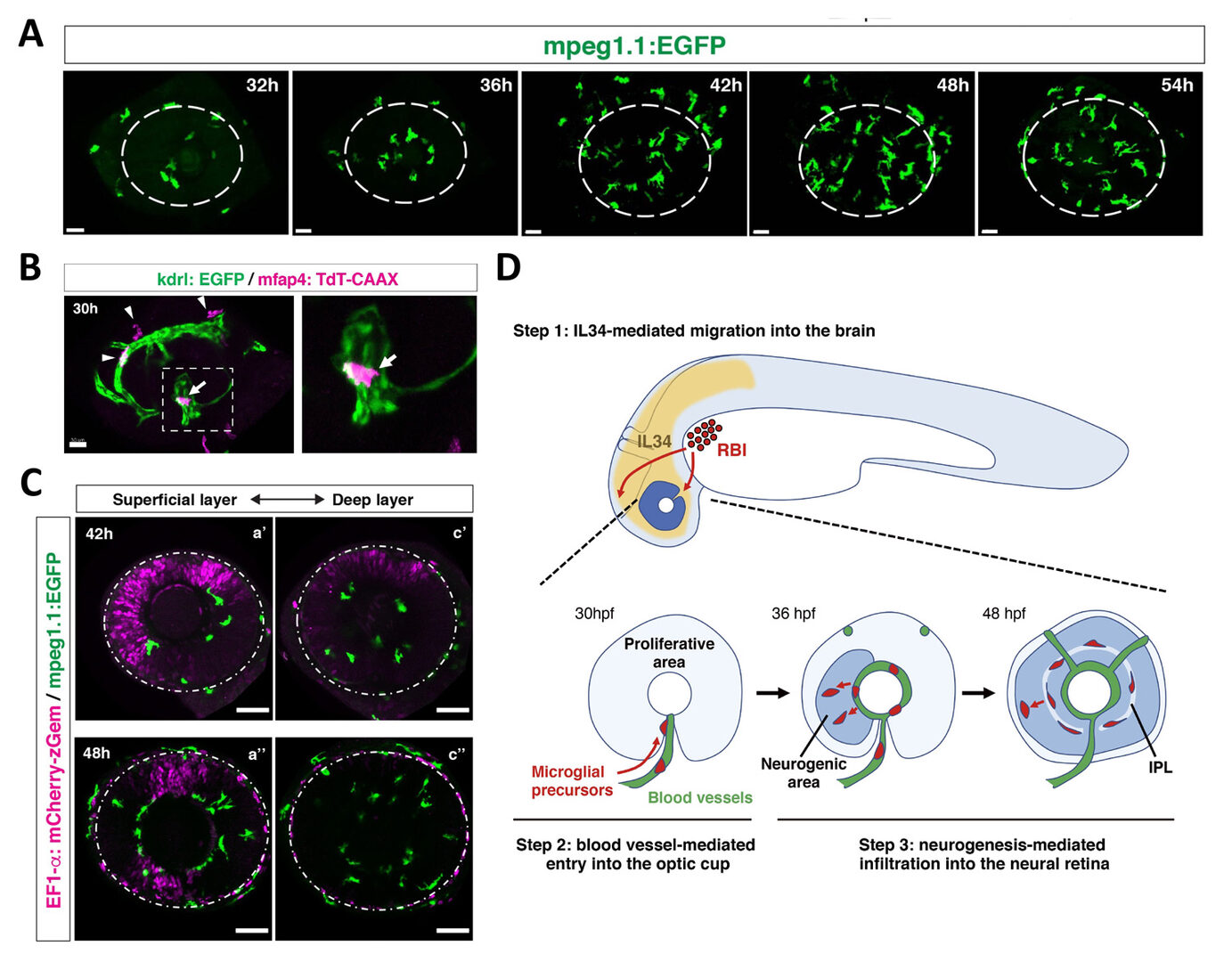 Title: Drp1-mediated formation of ER-mitochondria contact site and its role in apoptisis induction

Title: The mechanism of endoplasmic reticulum proteostasis and proteotoxicity in retinal degeneration.