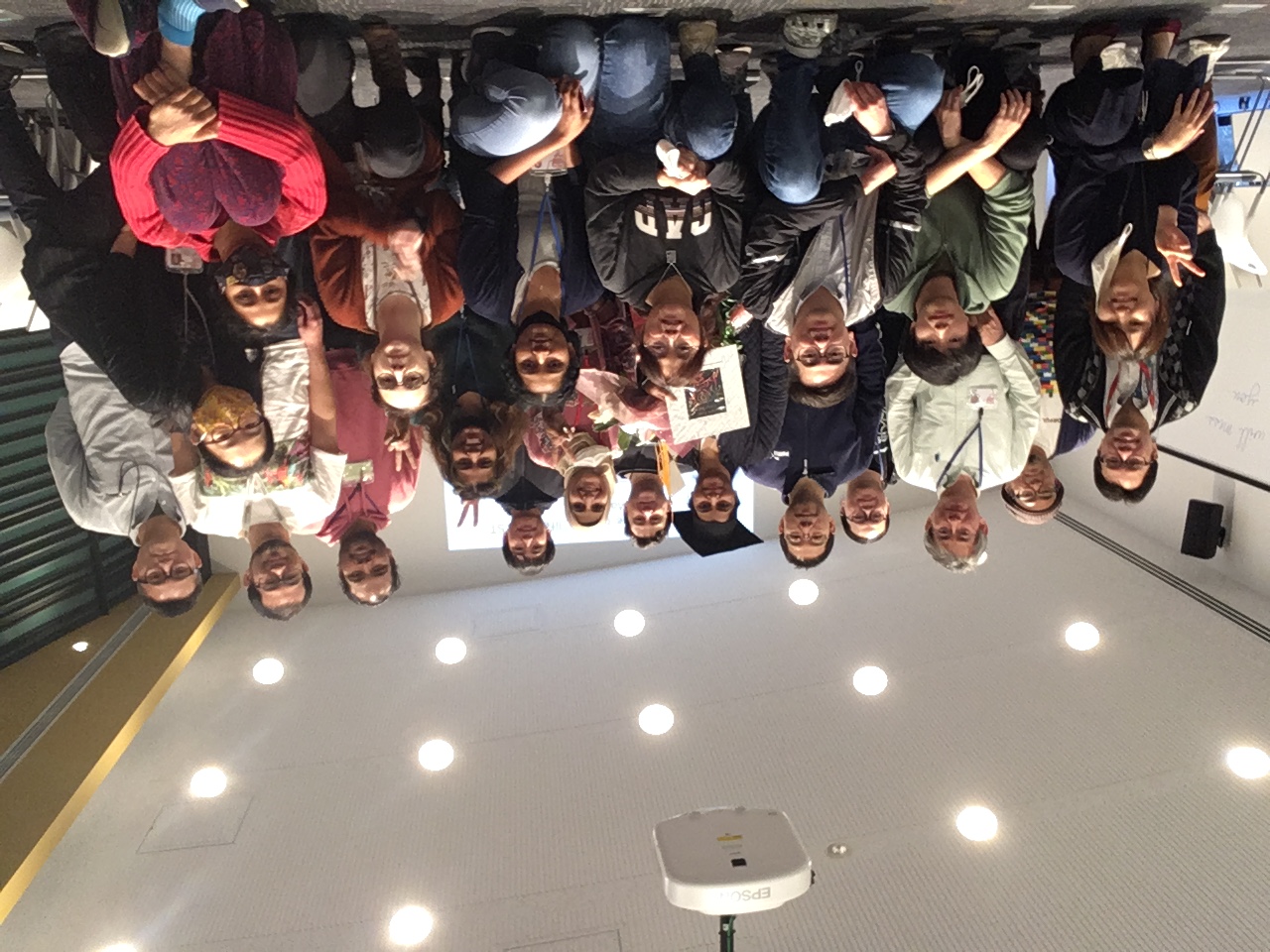 Intracellular protein transport is mediated by transport vesicles and its defects are often linked to photoreceptor degeneration in humans. However, it is uncertain how vesicular transport defects cause photoreceptor degeneration. We isolated zebrafish β-soluble N-ethylmaleimide-sensitive factor attachment protein (β-SNAP) mutants, in which photoreceptors differentiate, but undergo apoptosis prior to maturation (Nishiwaki et al., 2013) (Fig. 1A). β-SNAP cooperates with N-ethylmaleimide-sensitive factor (NSF) to promote recycling of SNAP receptors (SNARE), a key component of vesicular fusion machinery, by disassembling the cis-SNARE complex generated in the vesicular fusion process (Jahn and Scheller, 2006). Because it is likely that all combinations of cis-SNARE complexes fail to be disassembled in β-SNAP mutants, the mutant provides a good model for studying how vesicular transport defects cause apoptosis in photoreceptors. We found that photoreceptor apoptosis in β-SNAP mutants depends on one of t-SNARE proteins, BNip1. BNip1 normally regulates retrograde transport from Golgi to ER as a t-SNARE component of the syntaxin-18 complex. Interestingly, BNip1 has the BH3 domain, which activates apoptosis via modulation of apoptotic regulators

Bax and Bcl2. We found that loss of β-SNAP induces accumulation of syntaxin-18 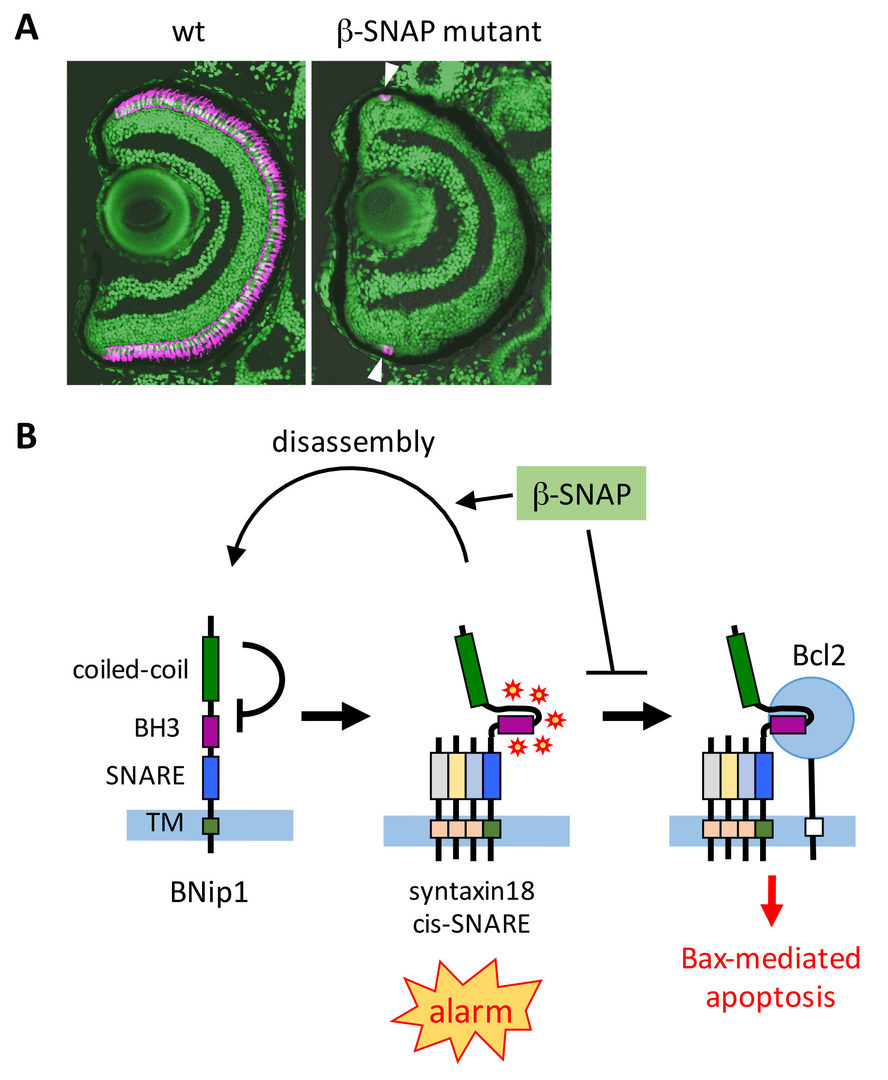 In FY2020, we investigated a physiological role of BNip1-dependent apoptosis. In zebrafish β-SNAP mutants, photoreceptors undergo apoptosis mainly in a small time window of developmental stages, 2 - 4 dpf in which apical photoreceptive membrane structure, called the outer segment (OS) rapidly grows. Since protein synthesis and transport to the OS are highly active in this period, photoreceptor apoptosis in β-SNAP  mutants correlates with high levels of protein transport. We examined a critical period of β-SNAP for photoreceptor maintenance by overexpressing b-SNAP under the control of heat shock promoter in β-SNAP mutants (Fig. 2A). We found that overexpression of β-SNAP in 2-5 dpf is enough to prevent photoreceptor apoptosis in zebrafish β-SNAP mutants at least until 21 dpf (Fig. 2B, C). 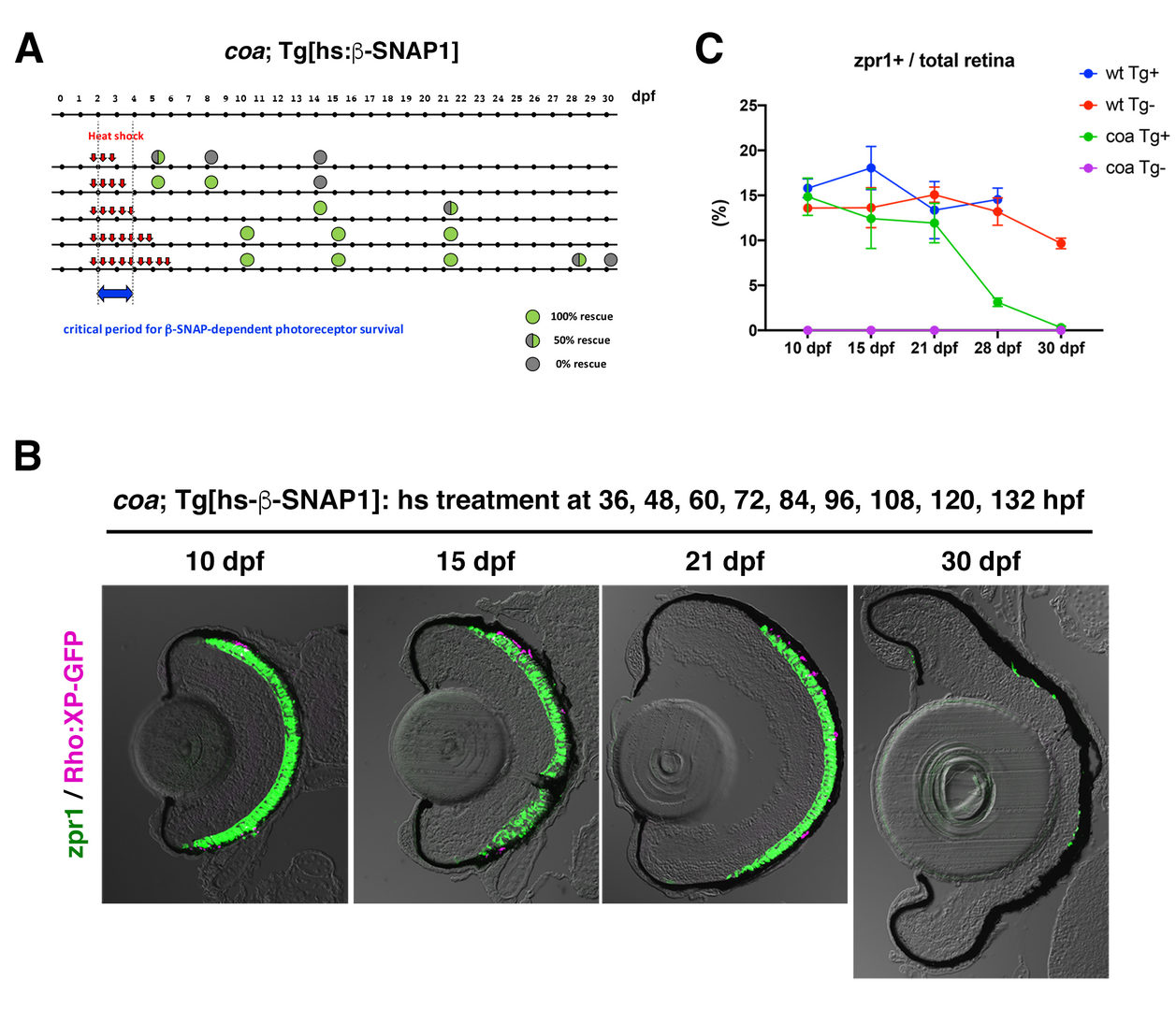 Fig. 2: Transient expression of ß-SNAP1 during the OS growth period is enough to prevent photoreceptor apoptosis in ß-SNAP1 mutants, coa

(A) Experimental design and results of heat shock promoter-driven ß-SNAP1 overexpression in ß-SNAP1 mutants, coa. Zebrafish transgenic line, Tg[hs: ß-SNAP1], were treated with heat treatment at different time points with a 12 hours interval in the period from 36 to 132 hpf. Red arrows indicate one hour-pulsed heat shock treatment at 37oC. Green or grey colored circle indicate the rescue results and its position indicates stage when embryos or larvae were fixed with PFA for analysis. Blue arrow indicates the critical period for ß-SNAP1-dependent photoreceptor survival.
(B) Retinas of coa; Tg[rho:XP:GFP]; Tg[hs: ß-SNAP1] embryos or larvae, which were treated with heat shock nine times at 36, 48, 60, 72, 84, 96, 108, 120, and 132 hpf. Photoreceptors and their OS were visualized by labeling with zpr1 antibody (green) and GFP signals from Tg[rho:XP:GFP] (magenta), respectively. Photoreceptors were maintained at 10, 14, 21 dpf, but degenerated at 30 dpf.
(C) Time line of percentage of zpr1-positive area relative to total retinal area at 10, 15, 21, 28 and 30 dpf. Average percentage of wild-type and coa mutant embryos with and without Tg[hs: ß-SNAP1]. Photoreceptors survived in coa mutant embryos with Tg[hs: ß-SNAP1] by 21 dpf, degenerated at 28 dpf and completely eliminated at 30 dpf (green line).

These data raise the possibility that BNip1-mediated apoptosis links to excessive activation of vesicular transport associated with rapid growth of the OS. Consistently, knockdown of IFT88 and Kif3b, which inhibits transport to the OS, rescued photoreceptor apoptosis in β-SNAP mutants. The treatment of rapamycin, which inhibits protein synthesis through mTOR pathway, also rescued photoreceptor apoptosis in b-SNAP mutants. Importantly, the ER stress response is not activated 2-3 dpf in β-SNAP mutants. Taken together, these data support our model in which BNip1 performs risk assessment that detects excessive vesicular transport in photoreceptors (Fig. 3). In general, deletion of β-SNAP activity compromises recycling of SNARE proteins, which eventually arrests all intracellular protein transport from ER to plasma membrane. In this case, it is likely that the ER stress response is activated to induce apoptosis. However, our study of zebrafish β-SNAP mutants indicates that prior to activation of the ER stress response, BNip1 detects vesicular fusion defects during a rapid OS growth period. Thus, photoreceptors use two different surveillance mechanisms, BNip1 and ER stress response, to monitor the upper and lower ranges of vesicular transport during development. 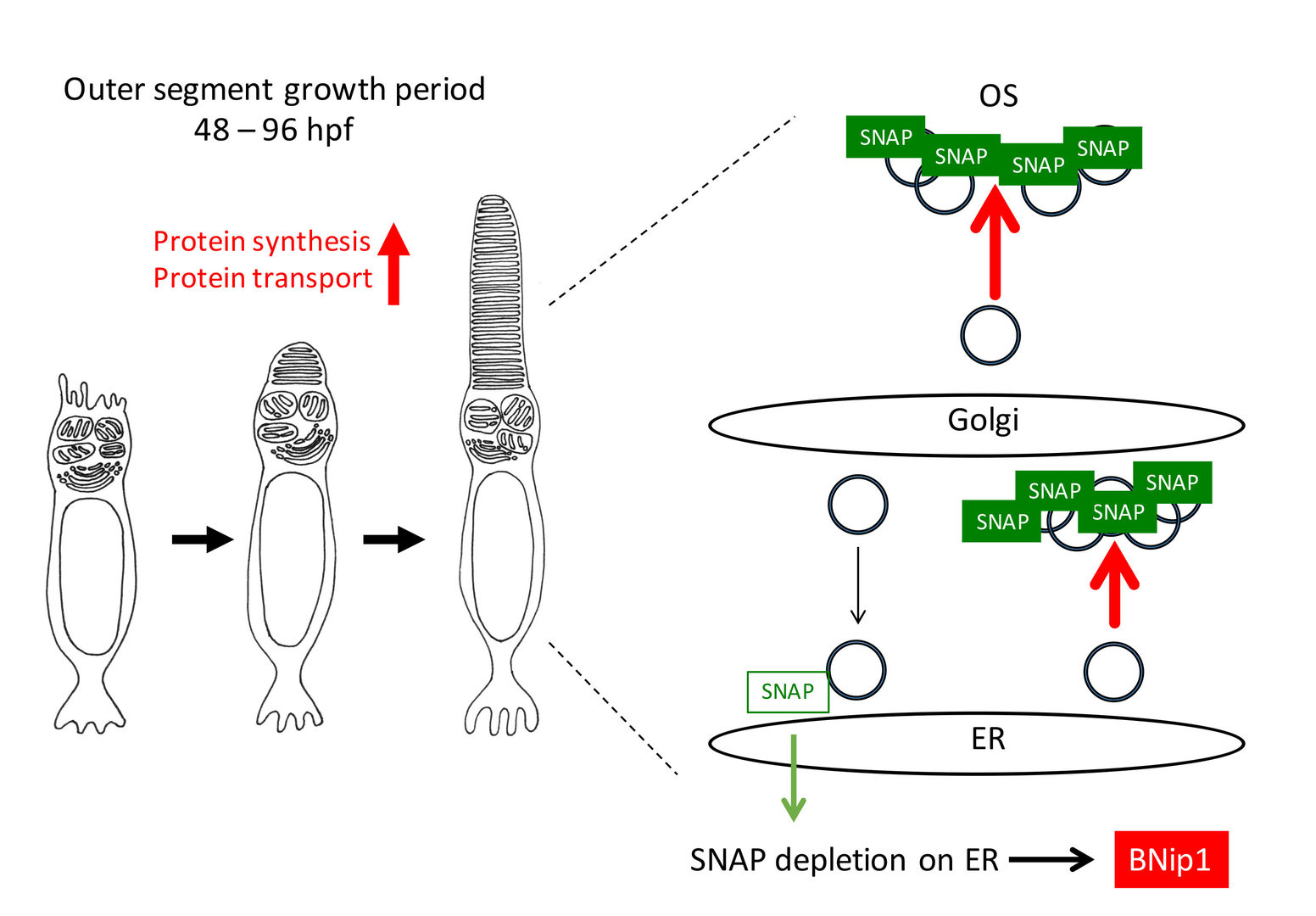 Fig. 3: A model for BNip1-dependent apoptosis. In zebrafish photoreceptors, the OS rapidly grows in 2-4 dpf, suggesting that protein synthesis and transport to the OS are highly activated in this period. Highly activation of vesicular transports may require ß-SNAP molecules in vesicular fusion sites, which subsequently decreases a relative contribution of ß-SNAP on vesicular fusion sites on ER membrane. In this case, it is likely that cis-SNARE complex of syntaxin-18 is accumulated, leading to the activation of BNip1 BH3 domain and Bax activation in mitochondria. In this model, BNip1 monitors excessive activation of vesicular transport during the OS growth period.

We examined normal developmental profiles of microglia and their colonization mechanism to the zebrafish retina. It was reported that microglia are initially generated in lateral plate mesoderm, but that they move to yolk, and enter the brain, including the eyes during zebrafish development (Herbomel et al., 2001). However, it is unknown what kinds of guidance cues enable microglia to move from yolk into developing retina, how microglia are integrated into retinal neural circuits, and also how much cell proliferation contributes to the number of microglia colonizing the retina during development. To answer these questions, we conducted time-lapse observation using zebrafish mpeg1.1:EGFP or mfap4:tdTomato transgenic lines, which specifically visualizes microglia in zebrafish (Ellett et al., 2011; Walton et al., 2015). We found that microglia progressively enter the optic cup from 24 to 54 hpf through the ventral optic fissure. After entry into the optic cup, microglia did not proliferate, suggesting that increased numbers of microglia largely depend on migration from the optic cup. We are now investigating molecular mechanism that guides microglia into optic cup during development. 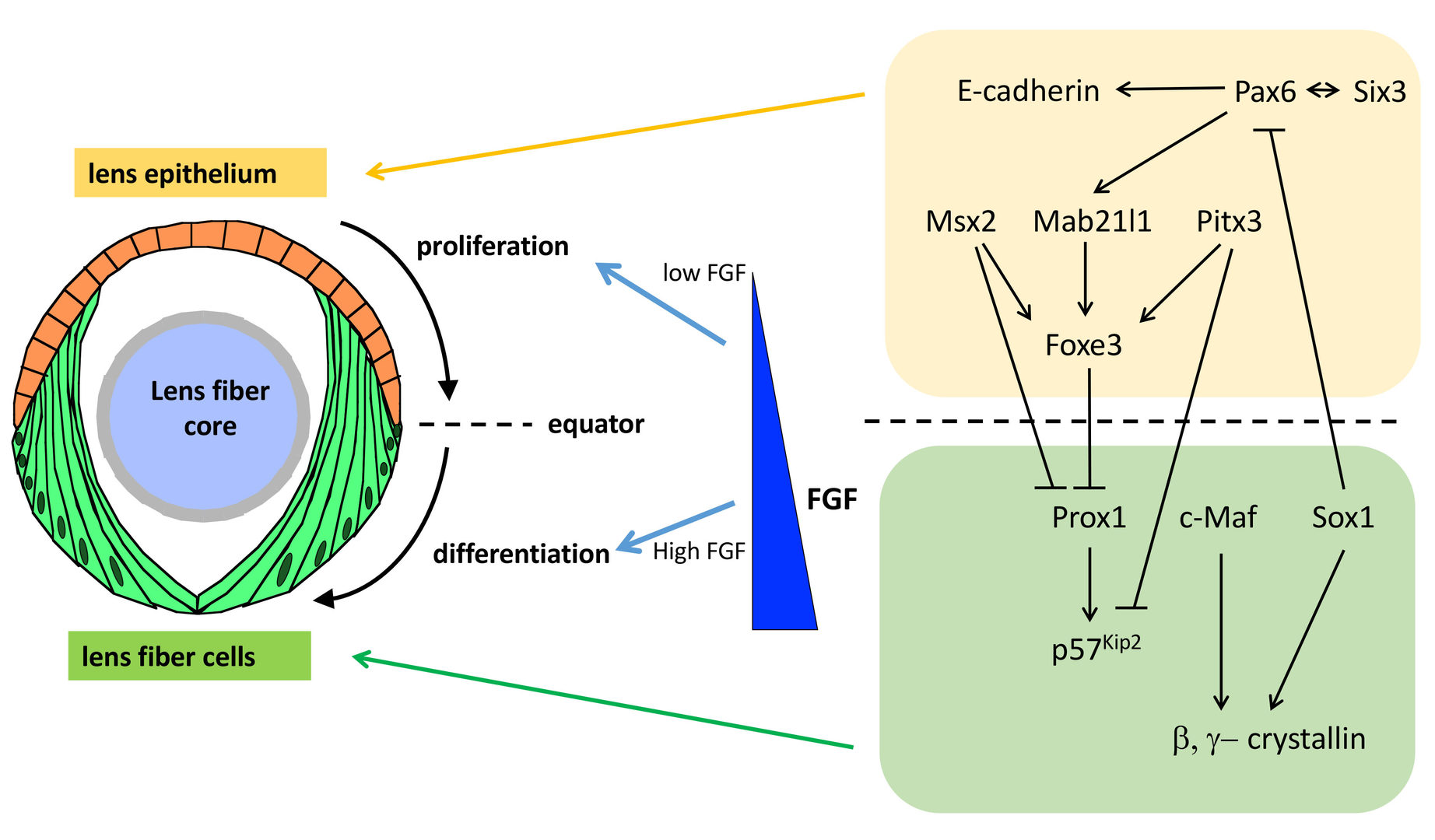 In order to elucidate the mechanism underlying equator-specific onset of lens fiber differentiation, we focus on one of Fgfrl1 genes, Fgfrl1b, which is specifically expressed in lens epithelium. FGF receptor-like 1 (Fgfrl1) has three extracellular immunoglobulin domains, which bind to FGF ligands, but lacks an intracellular kinase domain. In mammals, proteolytic cleavage of Fgfrl1 releases its ectodomain, which subsequently binds FGF ligands, suggesting that Fgfrl1 functions as a decoy receptor. To inhibit the function of Fgfrl1b, we injected its morpholino antisense into wild-type embryos and examined lens fiber cell differentiation. In Fgfrl1b morphant, expression of an FGF target was elevated, suggesting that Fgfrl1b suppresses FGF signaling. Consistently, the expression of a lens fiber differentiation marker was enhanced. Ectopic differentiation also occurred in lens epithelium of Fgfrl1b morphant. Thus, Fgfrl1b suppresses FGF signaling to ensure equator-specific onset of lens fiber differentiation.