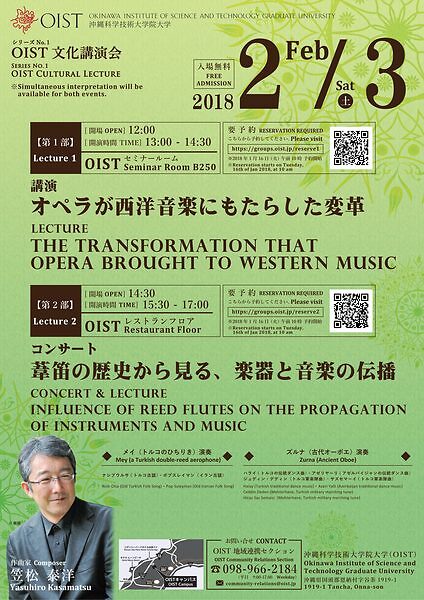 Reservations start 10am on Tuesday January 16th at https://www.oist.jp/reserve2.

​Born in 1960 in Fukui City, Japan. Graduated from Aesthetics at the Tokyo University. Kasamatsu, studied music composition under the late Akira Miyoshi, the piano with Miyoko Goldberg Yamane and the oboe with Isamu Iwasaki. The breadth of his music composition ranges widely from chamber music to musicals, music recitation play, opera, etc. He also provided many pieces of music, such as for stage productions by Yukio Hirukawa, dance performances by Kaiji Moriyama and Motoko Hirayama, and various film and TV productions. Not limited to the framework between classical and modern music, Kasamatsu has been exploring music beyond the borders of ethnic music, jazz, etc., constantly creating new compositions. He also performs with the oboe and similar types of ethnic musical instruments (zurna and mey), participating in a variety of recording activities. Having performed as a member of the Sakura Band under the faction of New Orient Music, Kasamatsu Yasuhiro Kasamatsu currently belongs to CRYSTAL ARTS INC.