Every day, millions of cells in our body divide to maintain essential tissue functions. Errors in cell division can lead to developmental disorders or cancer. Our research focuses on molecular mechanisms of cell division and quality control in normal and cancer cells in order to understand cell type-specific and tumor-suppressive mechanisms (1) and to identify biomarkers that confer a cancer-specific vulnerability to chemical drugs (2). We combine high throughput imaging, gene editing, genome-wide screens, and biochemistry to open new avenues for therapeutic development.

Defects in cell division can lead to aneuploidy and tumor development. To prevent the catastrophic consequences of cell division defects, proliferating cells continuously examine the integrity of their organelles, molecular machines of cell division, and the genetic information saved on the chromosomes. Tumor suppressors like p53 recognize defects and stop the proliferation of harmed and potentially dangerous cells.

Mitosis is one of the most critical cell cycle phases. During mitosis, the duplicated DNA condenses into compact chromosomes that segregate to the two daughter cells. This process is controlled by the mitotic machinery that consists of a microtubule-based spindle and centrosomes, which are the major microtubule-organizing centers. We are interested in mechanisms that faithfully segregate chromosomes and protect from defects that can lead to aneuploidy and cancer development.

We recently discovered a mitotic surveillance mechanism—the Mitotic Stopwatch—that detects defects in cell division by measuring the duration of mitosis (Meitinger et al. 2016). An extended mitotic duration indicates that cells have problems in faithfully distributing their genetic information to the daughter cells. Our work suggests that the Mitotic Stopwatch detects potentially dangerous cells, which are prone to accumulate aneuploidy, and initiates a p53-dependent cell arrest or death. Our aim is to understand the molecular mechanism of the Mitotic Stopwatch and how it protects the organism from cancer development.

Most approved chemotherapies also target healthy cells, which can lead to severe health problems. Therefore, it is desirable to develop therapeutic approaches that specifically target cancer cells. Many cancer cells acquire cancer-specific mutations or chromosomal alterations that allow them to continue to reproduce without any restriction. These alterations confer specific properties that may accompany vulnerabilities that can be targeted in therapeutic approaches.

Our goal is to identify cancer-specific vulnerabilities that open new opportunities for therapeutic development. We have previously identified a cancer-specific mitotic vulnerability that sensitizes cells to the inhibition of the mitotic kinase PLK4, which is a master regulator of centrosome duplication. Centrosomes are the major microtubule-organizing centers that catalyze mitotic spindle formation for chromosome segregation. Most cell types can proliferate without centrosomes (Watanabe, Meitinger et al. 2020). However, cancer cells with a chromosomal amplification of the region 17q23, which often occurs in neuroblastomas and breast cancer, fail to divide in the absence of centrosomes (Meitinger et al. 2020). This vulnerability provides an opportunity to develop therapeutical treatments for cancers with a chromosomal amplification of the region 17q23.

We use high throughput methods such as genome-wide screens as well as gene editing, live-cell imaging, and biochemistry to identify novel cancer-specific vulnerabilities using a variety of childhood and adult cancer cell lines as model systems.

For live-cell imaging, we establish model systems from healthy and cancer-derived cell lines using genetically modified cell lines as well as various cell cycle and fluorescence markers that are endogenously fused to the proteins of interest. This approach allows us to monitor the fate of cells that have experienced specific defects in cell cycle progression that are introduced by genetic mutations or chemical inhibitors.

Genome-wide screens are a powerful approach to identify novel regulators of cell proliferation as well as tumor-suppressive mechanisms. We previously identified two mechanisms that sensitize cells to the chemical depletion of centrosomes (Meitinger et al. 2016). Our work revealed a novel type of tumor suppressor (Mitotic Stopwatch) as well as the ubiquitin ligase TRIM37 as a novel master regulator of centrosome and mitotic spindle assembly. Subsequent work revealed that TRIM37 overexpression sensitizes specific cancer cells to PLK4 inhibition, which is a potential therapeutic approach to target neuroblastoma and breast cancers that frequently have a genomic duplication or amplification of TRIM37 (Meitinger et al. 2020). In a second study, we revealed that TRIM37-dependent defects in spindle assembly are a pathological mechanism that contributes to the cancer-prone human disease Mulibrey nanism (Meitinger, Kong, Ohta et al. 2021).

We are currently developing novel gene editing methods that allow us to screen for novel regulators of cell proliferation, tumor suppression, and protein functions. 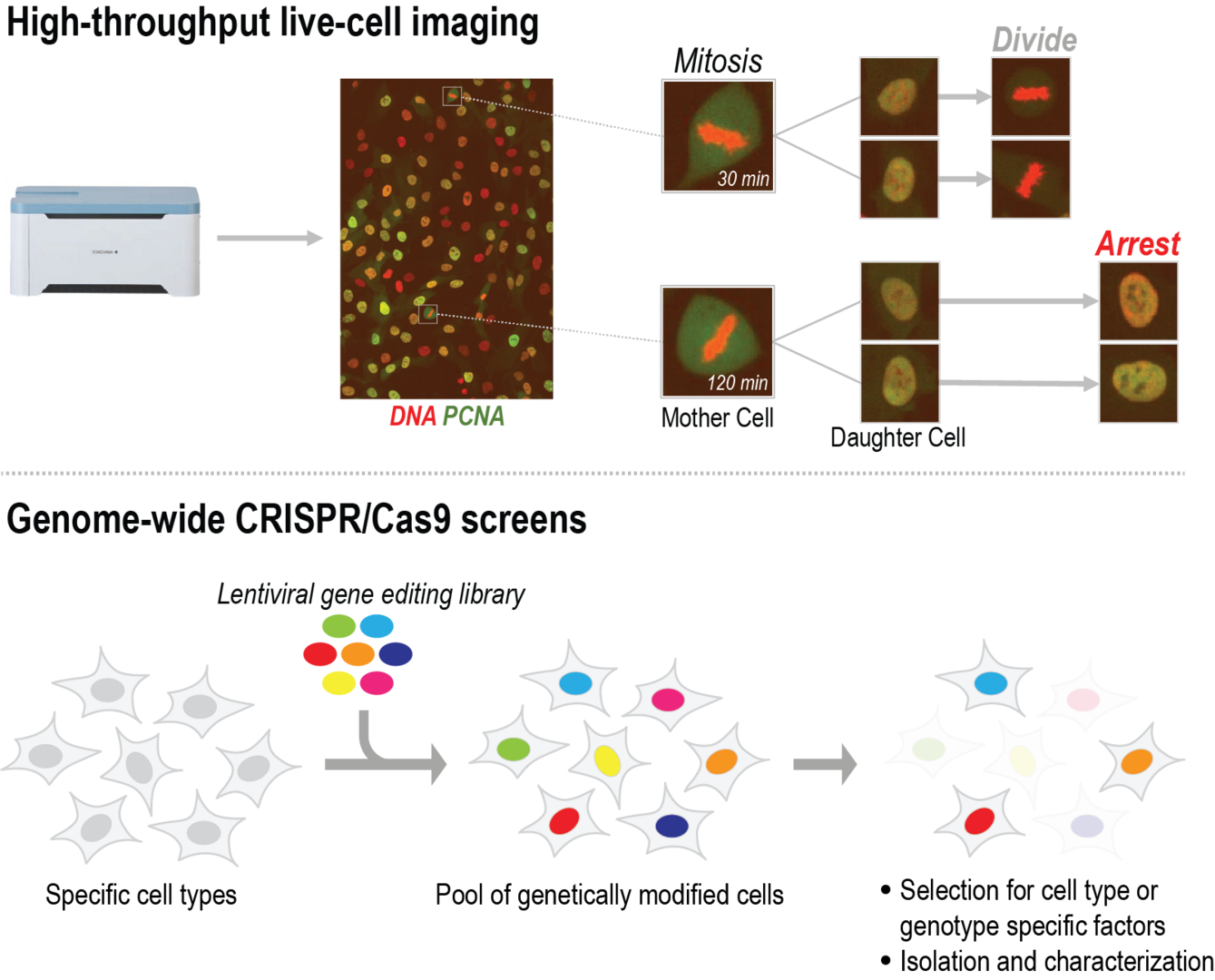