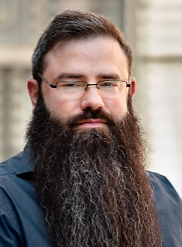 Engineering a biotechnological microorganism for growth on one-carbon (C1) compounds is a key step towards a circular carbon economy. This strategy integrates abiotic and biotic catalysis, harnessing their respective advantages while bypassing their drawbacks: CO2 is chemically activated to produce a C1 compound at high specificity and efficiency, while a microorganism utilizes the C1 intermediate for the production of a complex product.

Unlike C1 gases, formate and methanol can be easily stored and transported and are completely miscible, bypassing mass transfer barriers and potentially supporting higher microbial productivities. Moreover, we have recently showed that microbial conversion of methanol and formate can support higher energetic efficiencies than possible with other C1 compounds.

As natural formatotrophs and methylotrophs are generally less suitable for industrial use, adapting a model biotechnological microorganism for growth on formate or methanol has been a key goal of the synthetic biology community in the last decade.

We designed the reductive glycine pathway as the most efficient route for the assimilation of C1 compounds under aerobic conditions. The efficiency of the pathway stems from the reductive activity of the glycine synthase/cleavage system, which couples energetically unfavourable carboxylation with favourable reduction reaction, effectively condensing a formaldehyde-moiety with CO2 and ammonia to give glycine.

We engineered the model bacterium Escherichia coli for growth on formate via reductive glycine pathway. Sequential genomic introduction of the four metabolic modules of the pathway resulted in a strain capable of growth on formate with a doubling time of ~70 hours and growth yield of ~1.5 gCDW / mol-formate. Further evolution decreased doubling time to less than 6 hours and improved biomass yield to 3.2 gCDW / mol-formate. Growth on methanol was achieved by the expression of methanol dehydrogenase in the evolved strain.

We also redesigned C. necator metabolism for formate assimilation via the reductive glycine pathway. By integrating glycine biosynthesis and assimilation modules we were able to replace C. necator’s Calvin cycle with the synthetic pathway and achieve formatotrophic growth. We then engineered more efficient glycine metabolism and used short-term evolution to optimize pathway activity, doubling the growth yield on formate and quadrupling the growth rate.

These studies indicate that the reductive glycine pathway is a flexible tool that can be implemented in various hosts, granting them the ability to assimilate C1 carbon sources, and thus paving the way towards a sustainable carbon economy.