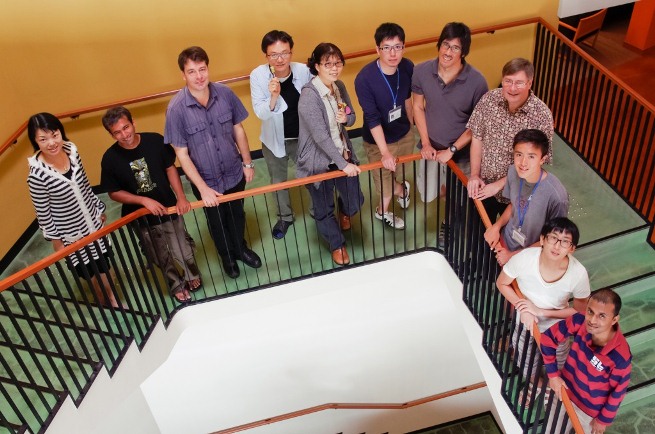 The goal of the Neurobiology Research Unit is to understand the cellular mechanisms and neural circuitry underlying learning and adaptive behavior in the mammalian brain. This collaborative, interdisciplinary program of research is focused on the striatum of the basal ganglia and the neuromodulators, dopamine and acetylcholine, which play a central role in the mechanisms of reinforcement learning. Our main achievements have been: to characterize synaptic plasticity in the striatum and its modulation by dopamine; to measure dopamine signaling during learning and its role in the therapeutic mechanisms of methylphenidate; and, to elucidate the dynamics of neural assemblies in the striatum and their significance for behavior. These findings are of broad, general significance for the neuroscience of learning and motivation, and of fundamental importance for clinical understanding of major neuropsychiatric disorders. Our research has the forward goal of developing better treatments for attention-deficit hyperactivity disorder and Parkinson’s disease, which are debilitating neurological disorders of great importance to children and adults.

Research activity has focused on: synaptic plasticity in the corticostriatal pathway; the nature of dopamine signaling during learning; and, the dynamics of neural assemblies in the striatum and their significance for behavior. We have also initiated collaborative studies with other researchers at OIST. These include work on a nanoparticle based drug delivery system for translating our basic science insights into new treatment approaches; and human imaging studies to test theories of altered reward processing in attention-deficit hyperactivity disorder. We use a powerful and unique combination of approaches extending from cellular to behavioral levels of biological organization, including 2-photon microscopy, electrophysiology, fast-scan cyclic voltammetry, behavior, optogenetics and computational modeling, taking advantage of the opportunities for cross-disciplinary research at OIST.

Dopamine release occurs in the brain in response to unexpected rewards and stimuli predicting rewards. Dopamine-dependent plasticity is a potential cellular mechanism underlying reinforcement learning in the striatum. We aim to determine by what rules and mechanisms the dopamine signal is translated into changes in synaptic efficacy?

We previously showed that corticostriatal synapses exhibit dopamine dependent plasticity according to a “three factor rule” for synaptic modification. In particular, a conjunction of presynaptic cortical input and postsynaptic striatal output results in long-term potentiation (LTP) when associated with dopamine inputs, but long-term depression (LTD) in the absence of dopamine. Thus, dopamine may facilitate selection of particular pathways among the matrix of corticostriatal input-output possibilities. However, the nature of this interaction requires further study.

The spiny projection neurons of the striatum differentially express dopamine D1 and D2 receptors. Since D1 and D2 receptor activation causes opposing biochemical responses, different rules for synaptic plasticity may apply to each category.  In order to definitively identify D1 and D2 neurons we are using BAC transgenic mice that selectively express green fluorescent protein (GFP) in either D1 or D2 cells.

Using these transgenic mice we tested the hypothesis that dopamine differentially regulates synaptic plasticity in dopamine D1 versus dopamine D2 receptor expressing subtypes of striatal neuron. We found tLTD in dopamine D1a receptor-expressing neurons but not in dopamine D2 cells.  Our ongoing work is investigating the biophysical basis for these differences.

3.2 The nature and timing of the dopamine signal in the striatum during learning
Collaboration with Professor Brian Hyland, University of Otago, New Zealand.

One of our main aims is to understand the actions of the dopamine signal in the striatum. Several lines of evidence indicate that phasic firing of dopamine neurons plays a crucial role in reinforcement learning. Because of the low rate of dopamine cell firing activity, changes indicating learning cannot be detected in unit recordings without averaging many trials. To obtain trial-by-trial measures of dopamine responses we developed expertise in fast-scan cyclic voltammetry (FSCV). We wrote in-house software for data acquisition and analysis by principal components regression, designed new head-mounted amplifiers, and developed new methods for fabricating carbon-fiber electrodes with higher sensitivity, lower noise and smaller size. With these methods we are able to measure dopamine concentration in freely moving rats with nanomolar sensitivity and sub second resolution. We are now investigating dopamine signaling in awake rats during learning of simple stimulus-reward associations.

Recently developments in materials and nanotechnology have allowed for the development of biocompatible materials that can be introduced into the body and externally controlled via physical, chemical or biological stimulus. The high power of femtosecond pulses in particular allows for specific control of biomaterials by using their nonlinear optical properties. In collaboration with the Dani Unit at OIST has been developing a novel technique for controlling biocompatible drug delivery systems using femtosecond pulses. This nanoparticle based drug delivery system provide a way to translate our basic science insights into dopamine modulation of plasticity into new treatment approaches.

We have continued a successful collaboration with Professor Tripp (OIST) and colleagues in Brazil (IDOR) in a human study using functional magnetic resonance imaging (fMRI) to measure brain activation in response to classically conditioned cues predicting reward. We found increased activation in the caudate, nucleus accumbens and ventral putamen during reward anticipation in controls but not in ADHD. In contrast, increased activation was observed during reward delivery in ADHD but not in controls (Furukawa et al., submitted). These findings support our hypothesis that impaired transfer of phasic dopamine release from reward to cues predicting reward may underlie altered reinforcement sensitivity in ADHD.