We are an experimental group with broad interests in soft matter physics, applied mathematics, mechanics, and their application to biologically inspired problems. Our experimental skills, the tools in our labs, and around the OIST campus, allow us to work in the general area that concerns macroscopic, non-relativistic matter and collective phenomena that emerge from their interactions. Our current interests are in problems related to interfacial fluid dynamics, granular solids, biomechanics of the human foot and fluctuations in renewable energy sources.

Aggregates formed at interfaces are the main focus of our investigations. Interfacial or two-dimensional aggregates are less explored theoretically and experimentaly in comparison to their three-dimensional counterparts. We have considered a generic model representetive of polymer-coated colloids and globular proteins. The system is two-dimensional where constituent particles are identical and interact pair-wise via an attractive potential. The range of this attraction is only a fraction of the particle diameter. The particles also experience a long-range Yukawa type repulsion resulting from the implicit solvent into which the particles are immersed. The competition between the short-range attraction and long-range repulsion is the key factor underlying the formation of particulate aggregates. The importance of such competing interactions in producing complex patterns was conjectured and theoretically studied in early '60s as a possible extension of van der Waals theory, the most celebrated one in the context of simple liquids. However, such systems could be realised experimentally and studied in detail only recently over the past two decades. A considerable body of literature has been accumulated about different forms of competions in diverse systems mentioned earlier, their specific details, and the resulting patterns. In the present work, we seek a unified, yet simple description for the morphological hierarchy observed in two-dimensions.

At the level of inter-particle interactions, the key factors are the strength and extent of both attraction and repulsion experienced by each particle due to its nearest neighbours. Each of them can be chosen and/or controlled in experiments to certain precision. For example, the strength and range of repulsion can be controlled by changing the salinity and/or pH balance of the medium. The same for attraction depends on the choice of particles and its chemical treatment during synthesis. Different realisation of competition between attraction and repulsion then result into different morphology of aggregates. For strong repulsion, the aggregates are wiggly and string-like (non-compact). As the attraction becomes dominant, the particles arrange themselves in isolated crystalline islands (compact). Percolated structures, known as 'gels', are observed when attraction becomes even stronger. Employing standard tools from liquid states theory, we have been able to encode the details of interactions into two length scales, one each for attraction and repulsion. The ratio of these lengthscales (repulsion over attraction) can now be used as a single parameter to describe the whole hierarchy of observed morphologies. This ratio Λ has a lowest bound of unity where the system can be considered as a set of effective hard disks. Repulsion can be imagined as a soft boundary around these disks. As long as the soft boundary remains 1.5 times the size of hard disks, gels are observed. As repulsion increases, isolated compact structures appear instead of percolated ones. When the soft boundary becomes twice as large as the hard disks, directionality in particle arrangemets starts to appear and string like aggregates are realised.

Standard statistical measures of shape and size of the aggregates are inadequate to characterise and describe the morphological hierarchy of aggregates in full detail. Understanding these structures in terms of configurational randomness turns out to be more useful. An entropic measure based on the static pair correlation function is computed. This measure, known as two-body excess entropy, clearly identifies three distinct morphological classes -- gels or percolated structures, compact crystalline structures and non-compact string-like structures -- when plotted against the dimensionless parameter described in the previous paragraph. Most importantly this result points out a quantitative direct relation between the competing interaction and resulting morphology which can be used to predict the microscopic structure of new materials in future. Another noteworthy result of this work is finding a master relation between the second virial coefficient and Λ the dimensionless descriptor of 2D aggregates. The second virial coefficient quantifies the overall force field experienced by all particles due to all other particles in the system. This is experimentally measurable and has earlier been used successfully to establish the correspondence among simple liquids. The master relation uncovered in the present work shows promise of extending such correspondence to complex liquids with finite spatial correlations. On a practical note, this result can be used to get a grip over the microscopic systems (through Λ) from a thermodynamic measurement.

Geometric frustration inherent to the competing interactions plays the key role in determining the dynamics of such aggregate forming systems. This very fact has been unattended so far as contemporary studies have relied heavily on the preparation protocol. Usually, the aggregates are prepared by abruptly quenching a high temperature equilibrium liquid to a very low temperature. While this process is good for all practical purposes, it poses serious difficulty for the fundamental understanding of dynamics by pushing it immediately out of equilibrium. By choosing a very slow cooling protocol, we have minimised the protocol dependence and studied both average and microscopic dynamics of the system. Further, we mention that studying the aggregation process is not our focus, rather we concentrate on the post-aggregation steady state dynamics of the system. From the evolution of energy fluctuations in this steady state, it is evident that the system remains non-ergodic over a considerable observation time even in absence of any external perturbation. Such non-ergodic behaviour is observed only when bulk temperature of the system becomes lower than certain value. This value is surprisingly close to the liquid-gas phase separation critical temperature for a system with only attractive interaction and no repulsion. Systems above this temperature behave like equilibrium liquids showing usual long-time diffusion. Below this critical temperaure, the system is sub-diffusive at long time and developes an intermediate time second relaxation which is indicative of heterogeneous dynamics in the system. Most importantly, the temporal heterogeneity is in accord with the variations in local spatial structures. By careful examination of particle displacement fluctuation, we have identified the difference in the microscopic mechanism of dynamics for finite-size compact and non-compact clusters. While the particles in the former are caged by their nearest neighbours, the particles in the later experience strong bonding with their nearest neighbours. Interestingly, this study reveals a universal relationship between diffusivity and structural randomness of the system. The diffusivity is always exponentially related to the exponential of the configurational space available to the system determined by the two-body excess entropy. As long as the system remains sufficiently random (equilibrium liquid or non-ergodic non-compact aggregates) this relation holds. With the appearance of compact crystalline structures, this relation breaks down.

In summary, this study establishes phenomenological relationship among the structural randomess, thermodynamic observables and average dynamics for a generic non-equilibrium pattern-forming system with competing interactions.

3.1 Drop impact on a soap film

Impinging drop on inclined flowing soap films can lead to three possible regimes of post-impact dynamics: (a) the drop bouncing off the film plane, (b) the drop coalescing with the downstream flow, and (c) the drop piercing the film and tunneling through it. The interaction between the film and the drop also presents the unique opportunity to explore the hydrodynamic effects and the elastic properties of soap films, influencing a single phenomenon in tandem.

We perform an experimental study of droplet impacts on a soap film flow, for a number of inclination angles of the film and heights of fall of the drop. The film thickness is approximately in the order of 10 μ and the drop diameter is approximately 1 mm. We mostly observe the bouncing-off regime for smaller angles of film inclination (<20°, to the pre-impact free fall direction of the drop). However, for higher angles of impact, puncture of the film (drop tunneling through) becomes a more common occurrence. The experimental studies are supplemented with an analytical model that characterizes the three impact types through a parametric study of the related phase behavior. 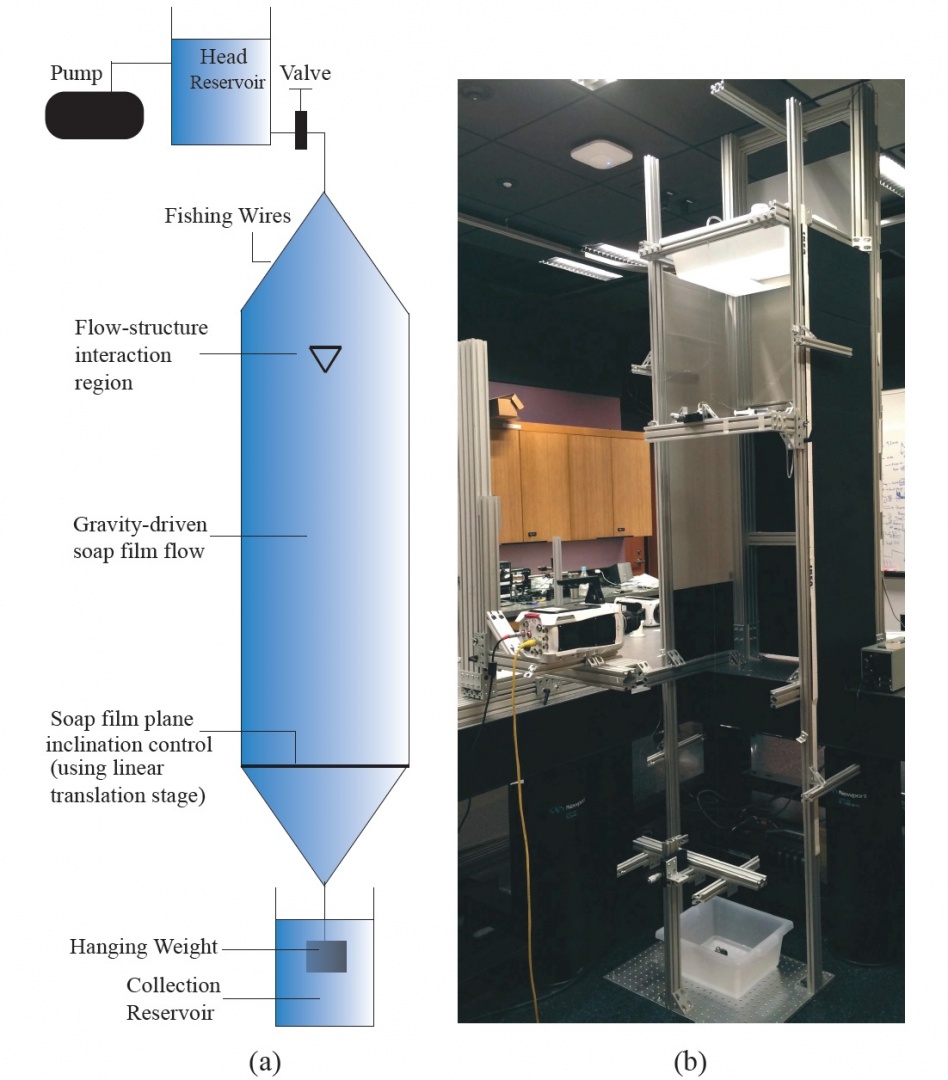 (a) Schematic diagram of the experimental setup. (b) Actual setup 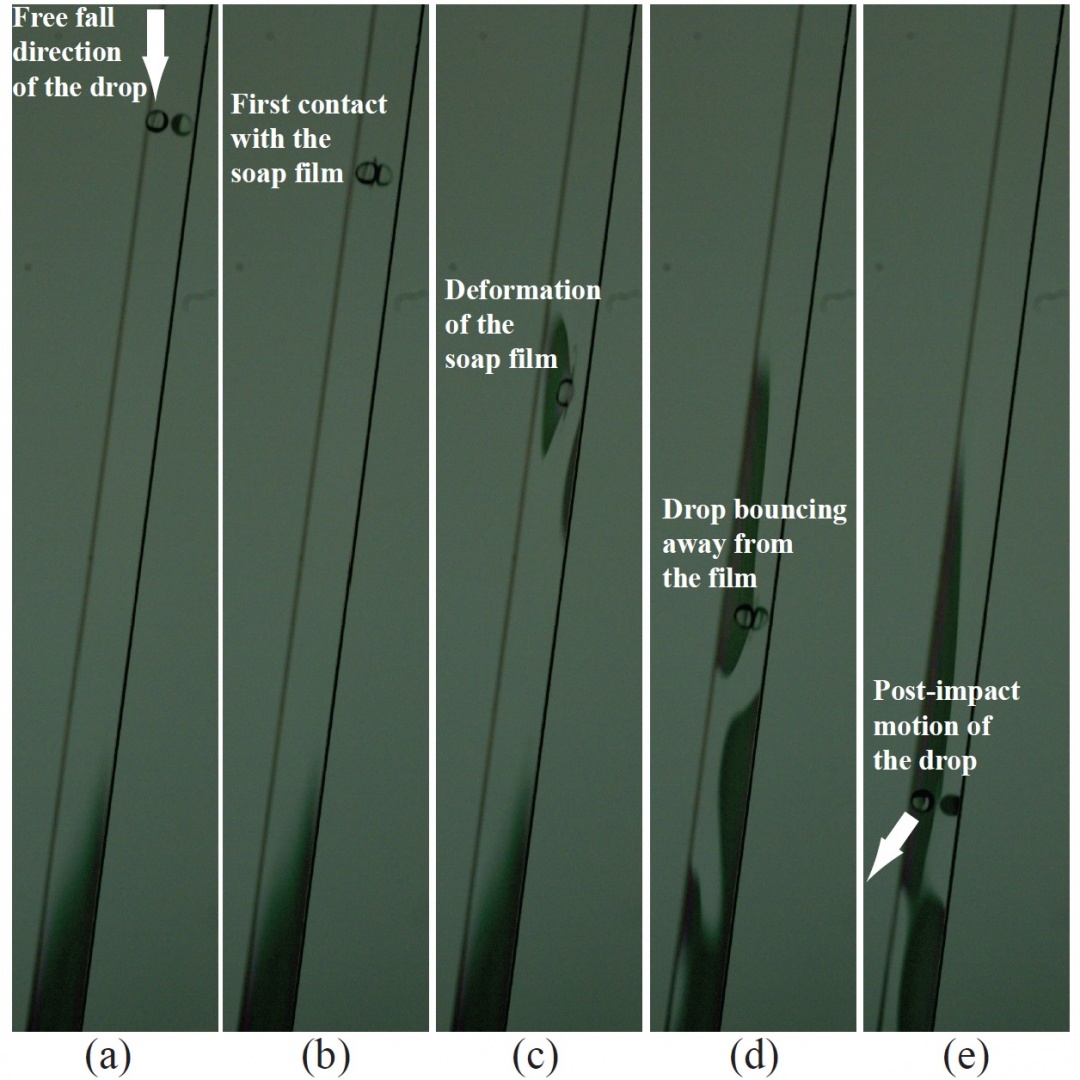 Different stages of the impact. The images are taken from the side (line of sight is almost in plane with the flowing soap film).

Vortex dipole formed on an inclined flowing soap film from impinging drops. This was imaged from the front. A monochromatic sodium lamp was used as the light source to detect the interference fringe patterns. 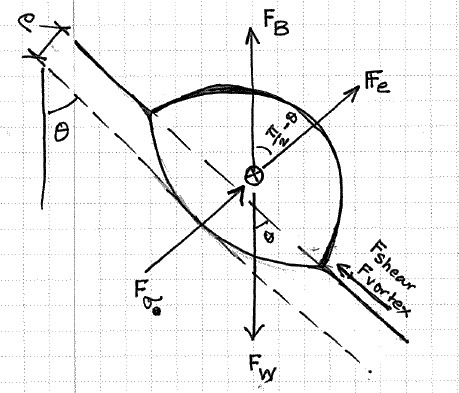 An additional aspect of the model explores the momentum transfer from the impacting drop to the film flow and identifying the flow features (shed vortices, waves etc.) to which the lost momentum gets diffused out.

1. Title: Mechanics and Geometry of Complex Structures: A pathway towards functions of forms

3. Title: From Vortex Reconnections to the Micro Big-Bang in Quantum Fluids