Presidential Lecture by Professor Jim Smith "Making a Human: Lessons from the First Ten Hours in the Life of a Frog" 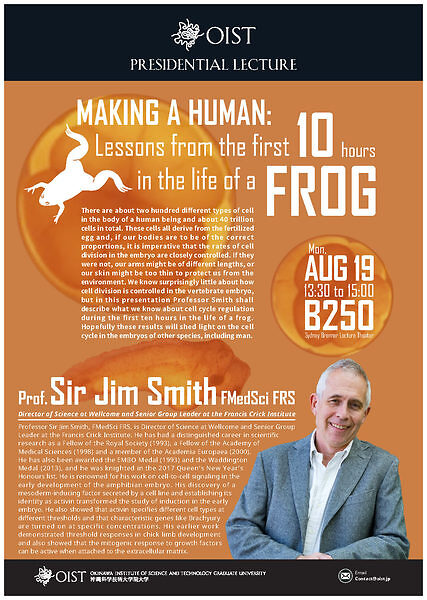 There are about two hundred different types of cell in the body of a human being and about 40 trillion cells in total. These cells all derive from the fertilized egg and, if our bodies are to be of the correct proportions, it is imperative that the rates of cell division in the embryo are closely controlled. If they were not, our arms might be of different lengths, or our skin might be too thin to protect us from the environment. We know surprisingly little about how cell division is controlled in the vertebrate embryo, but in this presentation Professor Smith shall describe what we know about cell cycle regulation during the first ten hours in the life of a frog. Hopefully these results will shed light on the cell cycle in the embryos of other species, including man.

Professor Sir Jim Smith, FMedSci FRS, is Director of Science at Wellcome and Senior Group Leader at the Francis Crick Institute. He is renowned for his work on cell-to-cell signaling in the early development of the amphibian embryo and has led a distinguished career as a Fellow of the Royal Society (1993), a Fellow of the Academy of Medical Sciences (1998) and a member of the Academia Europaea (2000). He has also been awarded the EMBO Medal (1993) and the Waddington Medal (2013), and he was knighted in the 2017 Queen’s New Year’s Honours list.