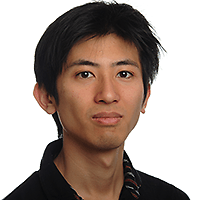 For our daily activities, we often plan purposeful movement and initiate such movement when appropriate, guided by external sensory cues. For example, while waiting at an intersection, we start planning to press the gas pedal and do so when the signal turns green. Planned movements released by the external “go cue” are faster and more precise than unplanned movements. Previous studies have shown that planning purposeful movements requires persistent/ramping neuronal dynamics in mutually connected brain areas, including the motor cortex (MCx) and motor thalamus. MCx directly projects to the downstream motor network in the brainstem and commands movement initiation. However, it is unknown how go cues transform the motor planning in MCx into completely different neuronal activity patterns that command movement. Leveraging anatomical information with large-scale electrophysiological recordings, we have established the flow of go cue information in millisecond time resolution across brain areas. Our data reveal that thalamus-projecting midbrain neurons (in the pedunculopontine nucleus and midbrain reticular nucleus) in mice show a phasic response to an auditory go cue (a cue that triggers movement). This phasic activity is necessary and sufficient to transform neuronal dynamics in MCx and to initiate movement in response to go cues shown by optogenetic manipulations. This non-canonical pathway may explain why some Parkinson’s disease patients who have difficulty internally initiating movement can trigger smooth movement initiation in response to external sensory cues, which is referred to as paradoxical kinesis.