The Marine Eco-Evo-Devo Unit uses the extraordinary diversity of coral reef fish to investigate the evolution of life history strategies in marine fishes, integrating ecological, evolutionary and developmental components. Using anemonefish as model systems we study the function, development and evolution of color patterns and how environment acting on hormonal pathways change those patterns.

The year 2021 was only the second year of the MEEDU unit! Because of the pandemic we still had no complete husbandry, strongly limiting the developmental experiments we could carried out. The work developed very well on the genomic side as well as on molecular ecology with a very nice collaboration with Tim Ravasi unit. We are now 17 people in the unit and there is quite a diversity of topics covered.

The unit has also started in our second location at Academia Sinica in Taiwan at Yilan Marine Research Station of ICOB (Institute of Cellular and Organismic Biology). Thanks to the work of Fiona Lee and Kai Wu there we have made tremendous progress on functional analysis of mutant anemonefish 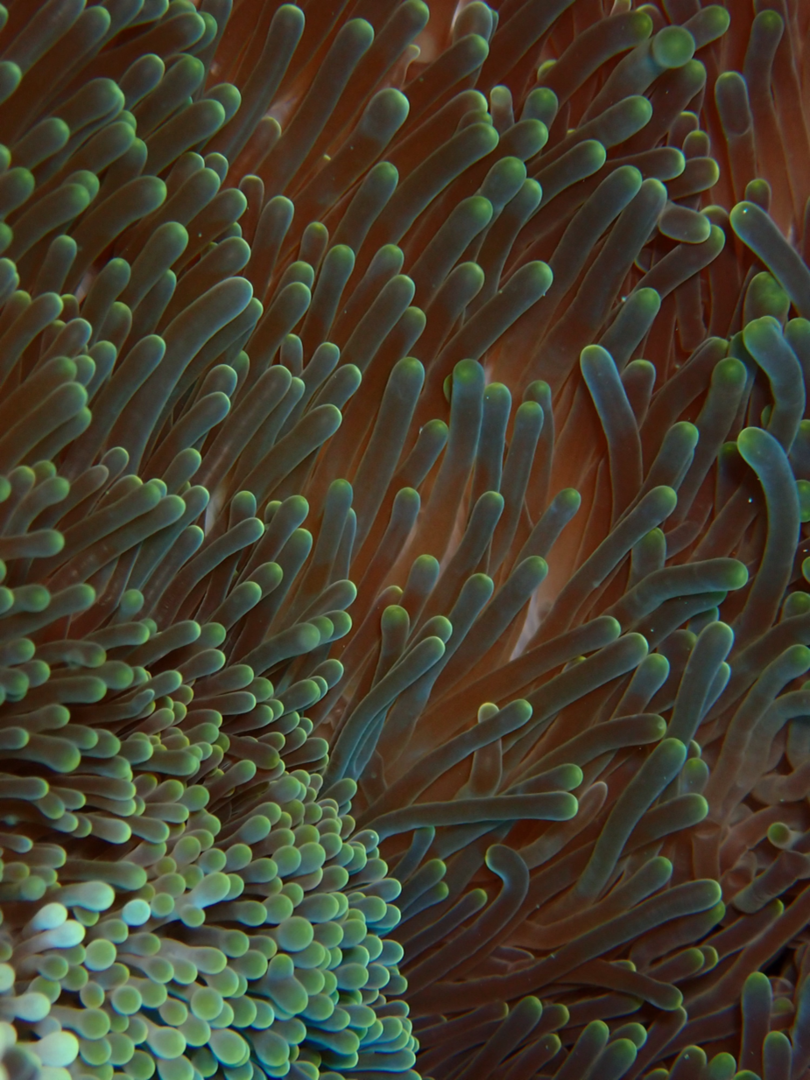 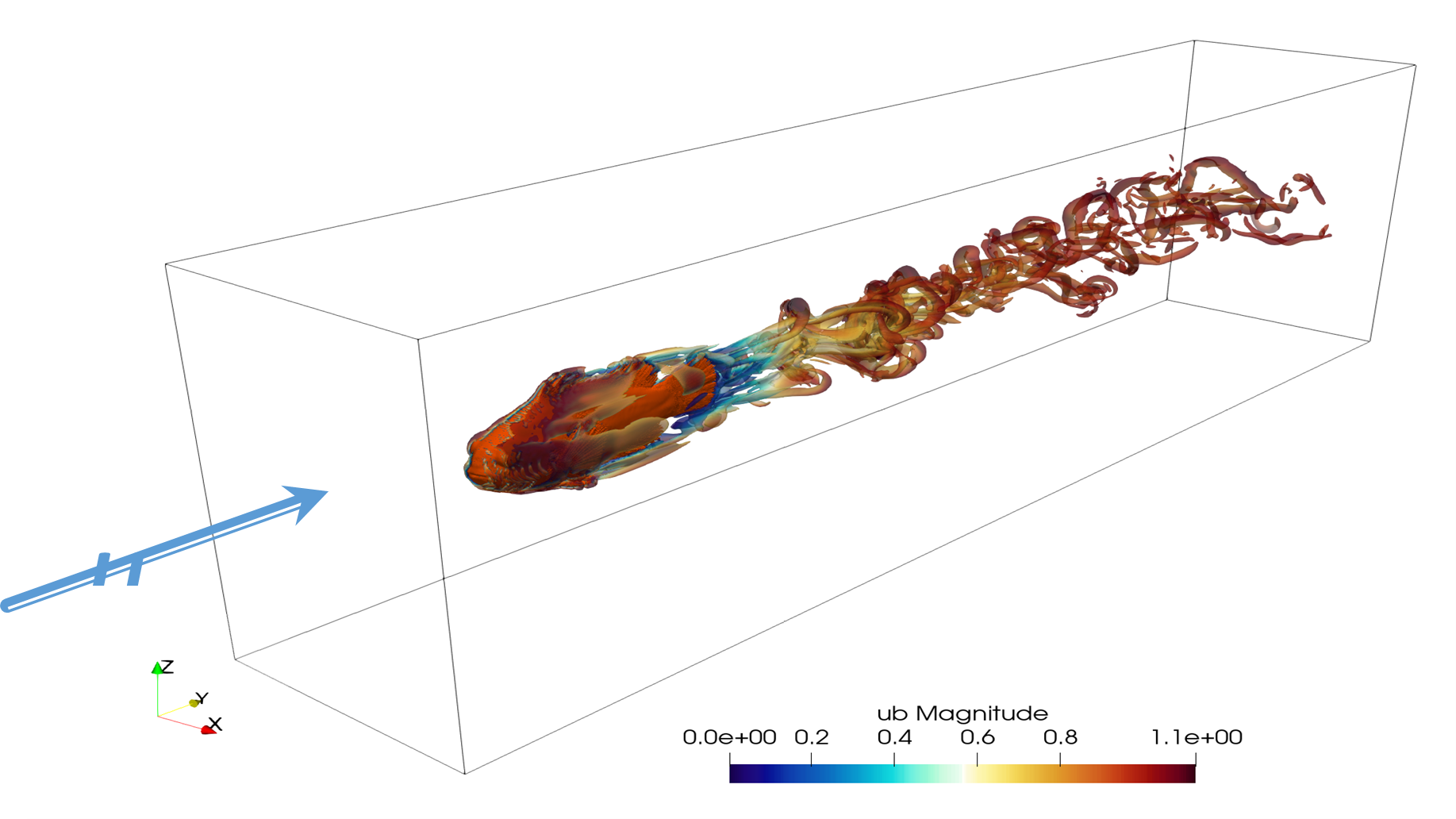 The turbulence generated by the fish shape on a flow of water allow to measure the drag force and to compare it between species.

Anemonefish are an emerging model organism for studying the ecology, evolution, adaptation, and developmental biology of reef fishes. Yet, high-quality genomic resources are still scarce, hindering advanced genomic analyses. Leveraging the power of PacBio long-read sequencing and Hi-C chromosome conformation capture techniques, we constructed a high-quality chromosome-scale genome assembly for the clownfish Amphiprion ocellaris, the main character of the Disney movie “Finding Nemo”. Together with its sister species Amphiprion percula, these two species are separated from the other 26 anemonefish. Our results revealed a high number of genes conserved only in the two clownfish and not in other species. Interestingly, we found that most of these genes are related to neurological functions and exhibited distinct expression patterns in brain tissue, highlighting the genetic toolkits involved in the unique ecology and behavior of the two clownfish compared to the rest of anemonefish. Similarly, we also assembled the genome of the yellowtail anemonefish Amphiprion clarkii, a species known for being highly polymorphic in their melanistic coloration (black pigmentation). Detailed analysis of pigmentation genes showed that this species has two additional copies of a tyrosine-protein kinase, a gene involved in melanophore development and pigment pattern formation. Overall, our studies provide the highest quality genomes for anemonefish to date whilst also providing a valuable resource for understanding the ecology and evolution of reef fishes. 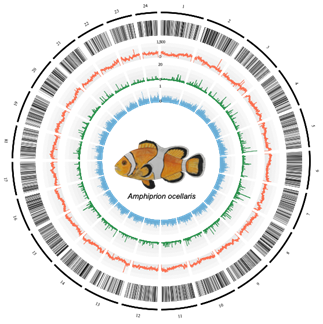 Chromosome architecture of the Amphiprion ocellaris genome. From the outermost layer inwards, each layer represents (1) chromosomes indicated by lines and ordered by size; (2) genic regions; (3) the number of repeats per 100 kb; (4) the PhyloP score calculated from the whole-genome alignment of anemonefishes with Acanthochromis polyacanthus as an outgroup species; and (5) tissue-specificity index (τ) of each gene

Color pattern analysis in anemonefish, displaying 1-3 white bars with a black edge on an orange-reddish body, is promising and has already provided valuable insights into several areas of pigmentation research. We previously discovered that 3 pigment cell types contribute to anemonefish coloring: black melanophores, yellow/orange xanthophores, and white iridophores. To explore the relationship between those three cell types we employ pharmacological treatment to alter differing aspects of individual cell types. For example, if fish are treated with DPAT, a compound that inhibits melanophore migration, we find that white bar formation is disrupted resulting in incompletely formed bars (B row in figure below). Additionally, we use color mutants to gain more information, like “Darwin Black” (C row in figure below) which as adults are black instead of orange. Interestingly, during color development their bars are forming incompletely at first, similarly to DPAT treatments. Comparing both data sets suggests that a high density of black melanophores restricts the movement of white iridophores, preventing normal white bar establishment.

3.3 Stripes and bars in anemonefish colonies

The spectacular pigment pattern of coral reef fish has since a long time attracted the attention of biologists and this have led to a substantial number of possible explanations. Among coral reef fishes, anemonefish recently became a model to study pigmentation and two major hypotheses are currently discussed for the function of these brilliant colors and in particular the conspicuous white bars they harbor. The first hypothesis is that these colors are used as a system to warn predators of the toxicity of the sea anemone hosting the fish. Whereas the second assumes that white bars are used as a system for species recognition and more generally have social functions in the anemonefish colonies. In our paper, by exploiting the rich fish fauna associated with sea anemones we provide evidence in favor of this second hypothesis. Indeed, working in the Ryukyu Archipelago we bring two complementary evidences: (i) By comparing the fish biota associated with either sea anemone (namely Stichodactyla gigantea inhabited by Amphiprion ocellaris) or scleractinian corals and their color pattern we reveal that around host anemones and zooxanthellate there was no fish species with bars but the fish species with stripe is more abundant suggesting the possibility that anemonefish actively repels as competitors fish harboring vertical bars. (ii) we directly test experimentally this model in the field by showing that the dominant A. ocellaris females responded more aggressively to intruders with bar patterns than those with stripe patterns, hence protecting their host anemone as their own territory. This indicates that only fish species without bar patterns may have access to host anemones (Fig. 1). 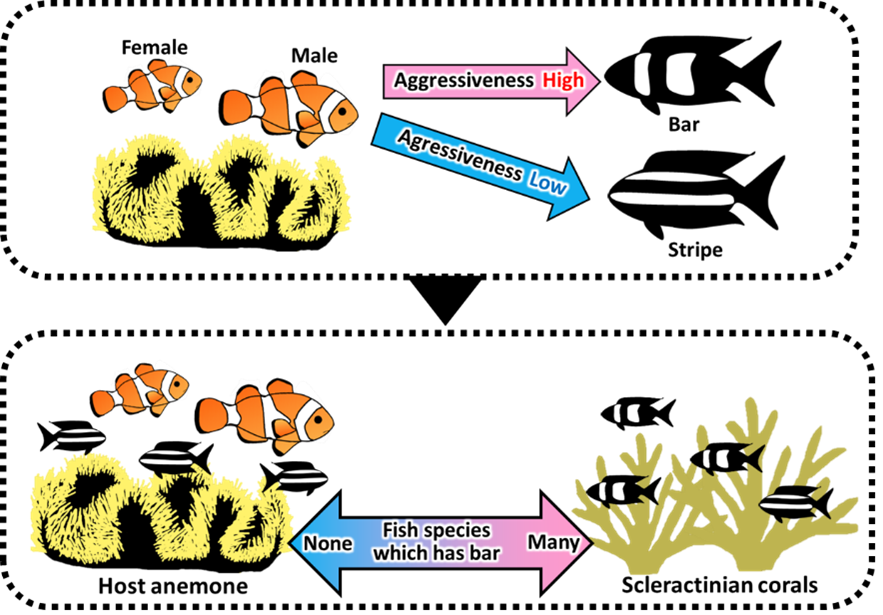 Schematic drawing of the relationship between differences in aggressive behavior of anemonefish toward bar and stripe patterns and differences in color patterns of fish inhabit coral and host anemone.

Body color is one of the major characters to distinguish fish species. It is often used as an essential criterion to identify fishes at the species level in many taxa. On the other hand, distinctive color morphs within a single species are often known. We studied morphology and genetics of Lentipes gobies collected in Japan and the Philippines. Despite the fact that males were classified into four color-morphs, no morphological differences other than the characteristic color pattern could be found. These four morphs were also not distinguished by mitochondrial genome sequences. Genomewide SNPs analysis clearly separated them, suggesting that they indeed represent four independent lineages. We observed that males display their species-specific body colorations during courtship. Prezygotic isolation due to female preferences for different male body colors is probably the primary mechanism of reproductive isolation between the four species. Three of the four species were described as new species and two of them, Lentipes kijimuna and L. bunagaya were featured in “New Species 2021” report.

We also published two new species of Rhinogobius from Palawan, Philippines. They were featured in following Mongabay news.