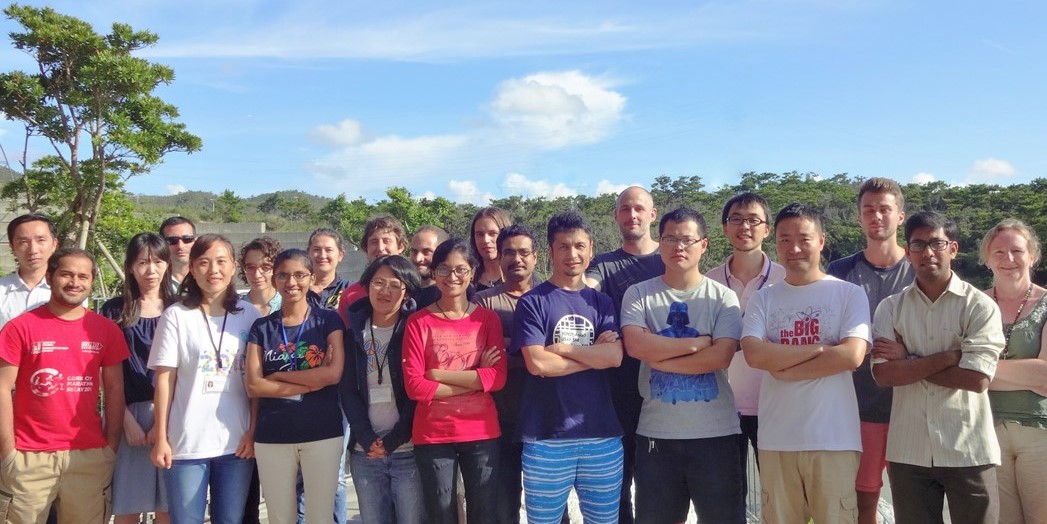 This year the group continued work related to nanofibre-mediated nonlinear optics in cold atomic systems, particle trapping at the nanoscale and sensing using whispering gallery resonators.   Amongst the major outputs were a proposal for atom tractor beam using modes in optical nanofibres, nanoparticle trapping using slotted fibres and a visible fequency comb using microbubble resonators.  Aside from research activities, we had our first OIST 5-year unit research review in July 2017 conducted by a panel of international experts, leading to continued funding for the research unit until 2022.   We also continued to contribute to outreach activities through the OSA Student Chapter and welcomed many young research interns from all around the world to hone their research skills by spending time with us here at OIST.    Finally, three PhD students graduated from the unit this year, bringing to an end our connections with University College Cork, Ireland.

Particle Trapping in the Evanescent Field of an Ultrathin Optical Fiber

While conventional optical trapping techniques can trap objects with submicron dimensions under specific conditions, the underlying limits imposed by the diffraction of light generally restrict their use to larger or higher refractive index particles. As the index and diameter decrease, the trapping difficulty rapidly increases; hence, the power requirements for stable trapping become so large as to quickly denature the trapped objects in such diffraction-limited systems. In this work we presented an evanescent field-based device capable of confining low index nanoscale particles using modest optical powers as low as 1.2 mW, with additional applications in the field of cold atom trapping. Our experiment used a nanostructured optical micro-nanofiber to trap 200 nm, low index contrast, fluorescent particles within the structured region, thereby overcoming diffraction limitations. We analyzed the trapping potential of this device both experimentally and theoretically, and showed how strong optical traps were achieved with low input powers.

Plasmonic tweezers (PT) based on nano-ring arrays on gold thin film were demonstrated. A cylindrical surface plasmon resonance (SPR) was generated in the aperture of a nano-ring. Numerically, we examined the near-field intensity over the SPR resonance wavelength range. Experimentally, using this plasmonic device, we successfully trapped and transported multiple polystyrene beads with diameters of 30 nm, 500 nm, and 1 µm at low incident laser intensities at 980 nm of less than 1.5 mW/µm2. These PTs demonstrate their potential as elements in lab-on-a-chip devices for µm- and nm-sized bio-particle trapping, manipulation and sorting, since they can provide efficient traps at relatively low powers for an off-resonance laser and with an increased density of trapping sites.

Optical frequency combs are one of the most important tools in optical metrology. In recent years, there has been significant and amazing progress in the development of on-chip micron scale frequency combs.  The microresonator combs presented in the literature have operating wavelengths in the IR region and it is well known that creating a visible wavelength comb in a microresontor is technically challenging due to the limited control of the dispersion in a typical microresontor.  2016 was an important year for the Optical Cavities and Sensing Group as we were the first group to create a direct Kerr comb in the visible band. This was achieved by using our microbubble whispering gallery resonators, which give us an extra degree of freedom for tuning the resonator’s dispersion.  Due to the hard work of Dr Yong Yong and PhD student Sho Kasumie, in collaboration with Prof Lang Yang’s group at Washington University St Louis, we were able to design a microbubble resonator with a zero dispersion wavelength near 750 nm and generate the first visible wavelength Kerr optical frequency comb, see Fig.1.

Optical filtering and signal routing is key to optical data communications and add/drop filters are one of the tools used for such signal processing. Normally add/drop filters require two optical waveguides coupled to an optical resonator.  PhD student Ramgopal Madugani in collaboration with Prof Pengfei Wang from the Key Laboratory of In-Fiber Integrated Optics, Harbin University, China,  Prof Gerald Farrell  from the Photonics Research Centre, Dublin Institute of Technology, Ireland and Prof Gillberto Brambilla from the Optoelectronics Research Centre, University of Southampton developed an add/drop filter which requires only a single waveguide in the form of a directional coupler, see Fig. 2. This simplification gives the device excellent features, such as improved ease of fabrication, multiple resonant peaks, and high mechanical stability. 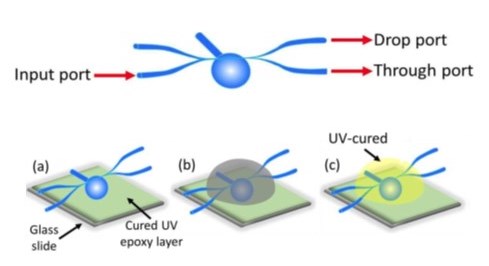 In whispering gallery mode resonator sensing applications, the conventional way to do sensing is by observing the steady-state transmission spectrum through the coupling waveguide. Alternatively, sensing based on cavity ring-up spectroscopy, i.e. CRUS, can be achieved transiently, see Fig. 3.  We investigated CRUS using coupled mode equations and found analytical solutions with a large spectral broadening approximation of the input pulse. The relationships between the frequency detuning, coupling gap and ring-up peak height were determined and experimentally verified using an ultrahigh Q-factor silica microsphere. This work shows that distinctive dispersive and dissipative transient sensing can be realised by simply measuring the peak height of the CRUS signal, which can improve the data collection rate for measuring fast transient events.

Micron-sized lasers have many attractive features for sensing applications such as ultra-narrow linewidths and high circulating intensities. One drawback of these tiny lasers is the their lack of tunability,  Dr Fuchuan Lei and colleagues have developed a microlaser that can be easily tuned by applying air pressure inside the microresonator. This tuning method is fast, stable and does not increase the footprint of the laser. The laser was made from a microbubble microresonator coated with an Erbium doped sol-gel, see Fig. 4. 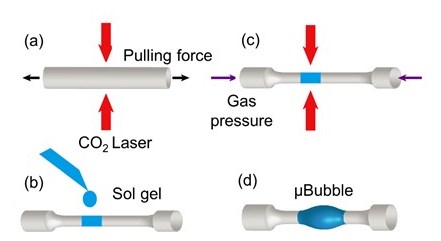 Optical nanofibers with sub-wavelength diameter have been of great interest for research in quantum optics in recent years. Most of the studies involving ultrathin optical fibers has focused on the fundamental fiber-guided mode. Here, we investigated the interactions between the first higher-order LP11 group of modes of a nanofiber and cold atoms. Compared with the fundamental mode, the higher-order modes (HOM) have a stronger evanescent field around the fiber waist to further enhance the atom-photon interaction and the combination of modes could be used to carry orbital angular momentum (OAM). This compact system may open a new path to transfer OAM to atomic systems and implement all-fibered high-dimensional optical memories.   We have demonstrated that selective modal excitation of nanofiber is achievable with an ultrathin optical fiber by carefully controlling the phase and polarization of the input probe beam. The interaction strength for a pure mode or a combination of modes can be determined by measuring the absorption spectra of guided resonant light. This make a first step towards the transfer of OAM in atom atom-fiber system (see Figs. 5 and 6). 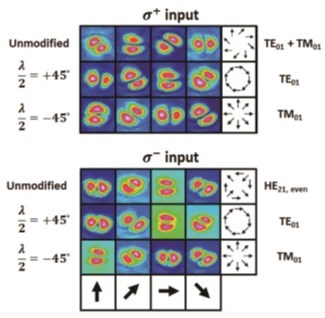 Fig. 5: Experimentally obtained mode selection via a σ+ or a σ− input and analysis of the obtained modes by rotation of a linear polarizer. Arrows at the bottom indicate the principal axis of the analyzer.

Fig. 6: (a) Fluorescence coupling into the HOM fiber from resonantly excited atoms when switching on/off the magnetic field of the MOT; (b) Absorption spectra obtained when the resonant probe beam was coupled into the HE11 mode of the nanofiber.

In this work, we reported on the modification of the local temperature of laser-cooled 87Rb atoms in a magneto-optical trap centered around an optical nanofiber when near-resonant probe light propagated through it. A transient absorption technique was used to measure the temperature of the affected atoms and temperature variations from 160 μk to 850 μk, for a probe power ranging from 0 to 50 nW, was observed. This effect could have implications in relation to using optical nanofibers for probing and manipulating cold or ultracold atoms.

In this work, we report on the inference of 87Rb Rydberg formation around an ONF in our cold atom system using a ladder-type excitation as shown in Fig. 7(a). The experimental schematic is given in Fig. 7(b). The 780 nm probe beam is delivered through the ONF while the 482 nm pump beam is in free space. Only the atoms coupled to the evanescent field, which practically extends a few hundred nm from the surface, participate in the Rydberg excitation process. The Rydberg excitation of the atomic population is inferred from the reduction in absorption of the probe light. The transfer of population to the Rydberg state as a function pump power is investigated. The results are compared with an equivalent free space experiment. 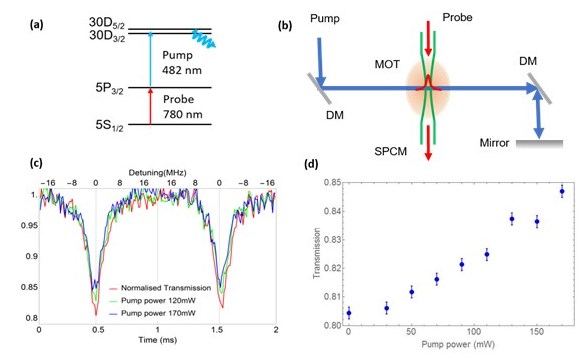 Fabrication of an optical nanofiber cavity for enhanced light-matter interaction

Strong matter-photon interaction is essential for successful operation of quantum information protocols. However, an emitter such as single atom or quantum dot does not interact with photons easily in free space due to the diffraction of a tightly focused beam. Historically, there have been two primary methods for overcoming this limitation. The first method is to enhance the interaction by placing the single emitter between two good mirrors. The interaction is enhanced by the roughly the number of times the photon passes the emitter. The second way to increase the interaction strength is to reduce mode area by more tightly confining light mode into the interaction regime. In this perspective, a novel design of an nanofiber based optical cavity which take both methods as mentioned to enhance light-matter interaction, see Fig. 8.

Fig. 8: (left) SEM image of a cavity fabricated on an ONF with N = 20. The fiber diameter is ∼ 830 nm, milled-air square length is ∼ 100 nm, fabrication period is ∼ 310 nm and cavity length is ∼ 2.2 µm. (Right) (b) FDTD-simulated transmission spectra of an optical nanofiber cavity. The red solid line corresponds to the x-polarization (x-pol) mode and the black line represents the y-polarization (y-pol) mode with a periodic number of N =20 and a defect length of 2.2μm. (a) Corresponding experimental data.

Prof. Nic Chormaic was promoted to Full Professor from Associate Professor in September 2016.