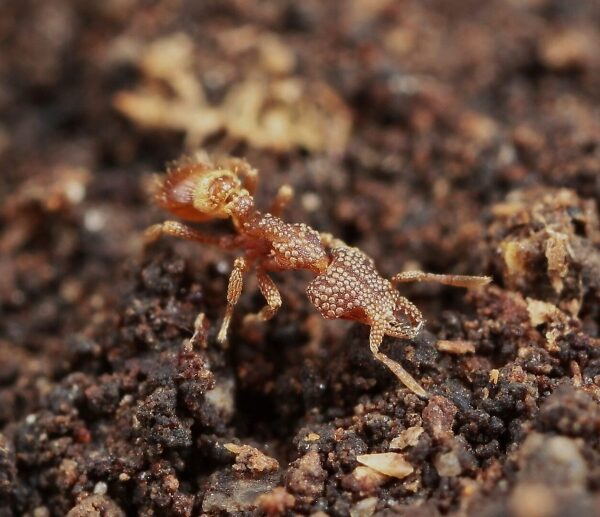 Post by Gaurav Agavekar, PhD student: One of the things I like about my PhD work is that I get to do a little bit of everything: fieldwork, molecular lab work, and bioinformatics. This helps keep monotony at bay and supplies a variety of interesting problems to solve. Although I like switching back and forth between these tasks, I probably enjoy fieldwork the most. Unfortunately, due to the pandemic, I haven’t had much of an opportunity to conduct fieldwork outside of Okinawa. Now that things are getting better pandemic-wise, I jumped on the opportunity to collect ants in mainland Japan.

Meeting the myrmecology legends in Japan

The week before last, lab technician Fumika Azuma and I embarked on a small field expedition to Manazuru forests in Kanagawa Prefecture, just south of Tokyo. My main goal was to collect some Strumigenys hexamera colonies, an Asian species without the iconic trap-jaw mandibles, but rather having the ancestral “gripping” mandibles. It’s known to reproduce parthenogenetically, which is why I wish to establish its colonies in the lab for our Strumigenys comparative genomics work. I was also hoping to collect some species that would serve as outgroups for this project, especially those not found in Okinawa.

Although S. hexamera occurs in Okinawa, I haven’t had luck so far in collecting this rather cryptic, soil-dwelling species. I thus reached out to Dr Keiichi Masuko, who I knew had collected it in the past, to seek advice for where I could collect some colonies. He generously offered to help us and tremendously facilitated the trip. Keiichi, a senior professor at the Senshu University, has been studying Strumigenys ants since before I was born! I was thus delighted to have an opportunity to discuss Strumigenys biology with him; over the years, he has made tons of interesting ecological and natural history observations on this fascinating group of ants, among others. Although Keiichi couldn’t join us in the field, he graciously requested Dr Mamoru Terayama to accompany us, who in turn obliged. Mamoru is a now-retired professor, who has vast experience in the systematics and taxonomy of Japanese ants and wasps. I was thrilled to be collecting ants with and visiting such giants in the Japanese myrmecology community.

Fieldwork at Manazuru forests in Kanagawa

Boarding the blazing-fast Shinkansen train at Tokyo, we headed to Cape Manazuru, a 30-min drive south of the small city of Odawara in central Japan. Along the way to the cape is a forest patch of moderate size with trails built for adventurous citizens. Although the trails are rather short and not difficult to walk, the forest supports several species of evergreen trees that are quite huge in size. “The trees are at least 300 years old”, I was told by Keiichi. The difference in forests between mainland Japan and Okinawa was stark—the latter, although being more diverse, typically lacks such huge old growth trees because of widespread deforestation and frequent typhoons. The broadleaf evergreen trees in Manazuru forests are primarily camphor, black pine, Itaaji chinkapin, and cane.

The soil arthropod community of the Manazuru forest is rich and abundant. As soon as we began searching, we found several colonies of Carebara, Nylanderia, and Hypoponera, the usual suspects in the ant world. Keiichi had told me that S hexamera nests ~10-20cm deep in the soil. It creates tunnels inside the soil and feeds on the abundant soil arthropods of the forest. Although I had never dug this deep before while looking for Strumigenys, and had mainly been focusing on taking apart rotten logs and flipping rocks, I quickly realized what kind of soil Keiichi was talking about. After digging through 10-15cm of loose soil, I began to find large soil lumps that had clay-like consistency. This type of soil seems ideal for the ants to make tunnels and create compartments to house their brood. Sure enough, within the first hour of beginning fieldwork, I found my first Strumigenys colony. Because Strumigenys species are rather tricky to identify in the field if you haven’t collected them before, I showed it to Mamoru, who immediately confirmed its identity as S hexamera. How exciting! Another highlight of the day included a Discothyrea sauteri colony, which unfortunately only had a queen and one worker, so raising this colony is probably going to be a challenge, not to mention their peculiar diet of arthropod eggs.

The next day we continued our efforts to find more Strumigenys colonies. We succeeded in collecting 5 more colonies, which included S canina and S incerta, neither of which I had collected before. We collected a bunch of other colonies, including a Myrmecina nipponica and Cryptopone sauteri, which might prove useful outgroups. We also collected a worker of Stigmatomma silvestrii, but unfortunately couldn’t locate the colony.

Meeting the members of the Myrmecological Society of Japan

Besides meeting Keiichi and Mamoru, we also had the great fortune of having dinner with Dr M Kondoh, the 87-year-old co-founder and current president of the Myrmecological Society of Japan. Dr Yamaguchi, a member of the Society, and his wife, both residing in Odawara, also joined us for the dinner.

It was wonderful to get plugged into the Japanese myrmecologists community and hear stories about their work. The izakaya served a menagerie of delicious food, complete with Kamaboko fish cake, for which Odawara is famous in Japan. All in all, we had a great and productive time in the mainland. Besides these wonderful memories, the M6.1 earthquake I experienced in Tokyo will remain unforgettable. This was the most intense earthquake I have ever experienced and being on the 10th floor didn’t help either. Thankfully there was no tsunami or any damage from the earthquake, but those few seconds were unarguably the scariest of my life. Now back to the lab sorting those ant colonies…

We collected 6 Strumigenys colonies in total and managed to collect one colony of S hexamera. Here they are in their artificial lab nest.