[Seminar] Ecocultural range-expansion model of modern humans in the Paleolithic 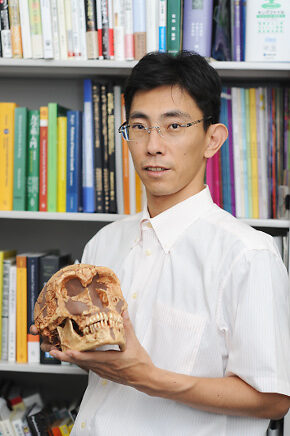 The ecocultural framework for the competition between hominid species allows their carrying capacities to depend on some measure of the levels of culture they possess.  In the present study both population densities and the densities of skilled individuals in Neanderthals and modern humans are spatially distributed and subject to change by spatial diffusion, ecological competition, and cultural transmission within each species.  We analyze the resulting range expansions in terms of the demographic, ecological and cultural parameters that determine how the carrying capacities relate to the local densities of skilled individuals in each species.  The range expansion dynamics consist of multiple wave fronts of different speeds, each of which originates from a traveling wave solution.  Properties of these traveling wave solutions are mathematically derived.  Depending on the parameters, these traveling waves can result in replacement of Neanderthals by modern humans, or assimilation of the former by the latter.  Spatially and temporally extended coexistence of the two species, which would have facilitated the introgression of Neanderthal genes into modern humans and vice versa, is observed in the traveling waves.  Archaeological findings on the spatial and temporal coexistence of Neanderthals and modern humans are discussed.  Such findings are important for the validation of this class of ecocultural models.