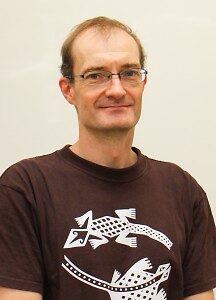 Prof. Mikko Heino: Professor at the University of Bergen, Norway, and also affiliated with the Norwegian Institute of Marine Research and the International Institute for Applied Systems Analysis (IIASA), Austria

Harvesting is always selective and therefore a potential driver of evolutionary change in exploited populations. Here we report results from a decade-long harvesting experiment with guppies (Poecilia reticulata). The experiment is based on self-renewing wild-origin guppy populations that are harvested periodically. The experiment is size-selective by design: the harvest is strictly size-based with either fraction P of large fish (i.e., above the initial male maturation length threshold, 16 mm), fraction P of small fish, or fraction P/2 of all fish removed. Other types of selection emerge as secondary consequences of harvesting or as unintentional domestication selection. We monitor demography and phenotypic trait change in replicate populations themselves (where environmental conditions are not fully standardized) and phenotypic trait change in common-garden conditions.

An assay of immunocompetence, based on the development of parasite loads when exposed to the ectoparasite Gyrodactylus turnbulli, revealed that fish from the small-harvested lines had the highest parasite loads. These fish were the largest and therefore offered more habitat area for the parasites, but differences between the treatments remained after controlling for size differences. This suggests differences in energy allocation, with small-harvested lines investing more in growth and less in immunocompetence. An assay of behavior was based on multiple tests, spanning different dimensions of temperament. In terms of variability between individuals, the single most important dimension of temperament was along the exploration–avoidance axis. Fish from the small-harvested lines were more explorative than fish from the other treatments. This suggests that size-selection favoring large size also favors behaviors that increase energy intake, at the expense of higher risk.

In conclusion, the experiment shows that long-term harvest has significant demographic and evolutionary consequences. Harvesting large fish, similar to commercial fisheries, favors slow-growing, timid fish, but which have more energy to allocate to immunocompetence. Surprisingly, we could not find evolutionary change in maturation. In addition to the lack of statistical power, it is possible that our common-garden assays do not represent the competitive environment in which the fish have been evolving.

Mikko Heino is an evolutionary ecologist interested in how organisms adapt to their environments, especially when they are faced with new challenges, such as fishing. He is using both theoretical, statistical, and experimental approaches. He obtained his PhD from University of Helsinki, Finland, in 1998. He is currently a professor at the University of Bergen, Norway, and also affiliated with the Norwegian Institute of Marine Research and the International Institute for Applied Systems Analysis (IIASA), Austria.