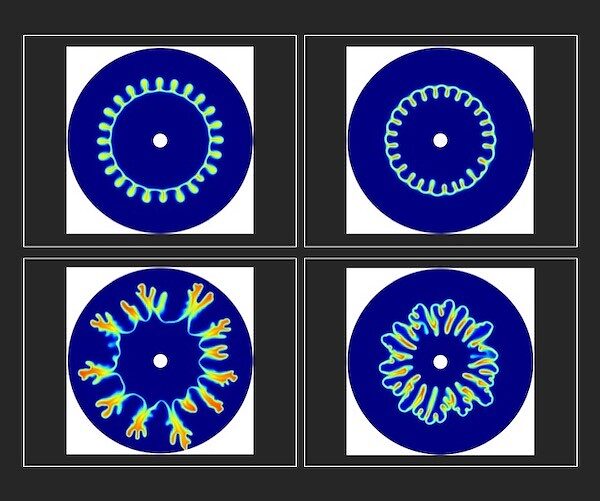 Satya joined Poromechanics Lab at Oxford in July 2019 as a postdoc in flow through soft porous media. His research agenda is centered on the development of mathematical models to solve challenging applied-mathematics problems. He has worked on projects related to miscible viscous fingering with and without chemical reactions, premelting dynamics, and flow through soft porous media.
He graduated from IIT Kharagpur in 2011 with a first class in M.Sc. Mathematics degree and was awarded the Institute Silver Medal. He earned his Ph.D. in Applied Mathematics from IIT Ropar in 2016 and was awarded the Best Thesis Award in Mathematics (2018). Before joining Oxford, he worked as a postdoc (2016–2019) with John Wettlaufer at the Nordic Institute for Theoretical Physics (NORDITA), Sweden. He has also worked as visiting researchers at TU Wien (2014–2015) and ULB Belgium (2014).

The effects of the A+B → C chemical reaction on miscible viscous fingering in a radial source flow are analyzed using linear stability theory and numerical simulations. This flow and transport problem are described by a system of nonlinear partial differential equations consisting of Darcy’s law for an incompressible fluid coupled with nonlinear advection-diffusion-reaction equations. For an infinitely large Péclet number (Pe), the linear stability equations are solved using spectral analysis. Further, the numerical shooting method is used to solve the linearized equations for different values of Pe including the limit Pe → ∞. In the limit of infinitely fast reactions, the dynamics are controlled by two dimensionless parameter RPhys = − (RA − βRB) and RChem = − (RC − RB − RA). Here, β is the ratio of reactants’ initial concentration, RA, RB and RC are the log-viscosity ratios. We perform numerical simulations of the coupled nonlinear partial differential equations for a wide range of Damköhler number (Da). The critical values RPhys,c and RChem,c for instability decrease with Pe and they exhibit power-laws in Pe. In the asymptotic limit of infinitely large Pe they exhibit a universal power-law dependence on Pe (RChem,c ∼ Pe−1/2 as Pe → ∞) both in the linear and nonlinear regimes. In the limiting case RA = RB, we have found that, for a given chemical reaction rate, an unfavourable viscosity contrast is not always sufficient to trigger the instability. For every fixed Pe, these effects of chemical reaction on VF are summarized in Da−RC parameter space that exhibits a stable region separating two unstable regions corresponding to the cases of more and less viscous product. Fixing Pe, we determine Da-dependent critical log-mobility ratios\( R_C^+\)and \(R_C^-\) such that no VF is observable whenever \(R_C^+≤R_C≤R_C^-\).