Sanshins are Okinawan musical instruments whose name literally translates to "three strings".  The Chinese originally transported similar instruments to Okinawa in the 14th and 15th centuries.  These Chinese instruments evolved into the Ryukyu sanshin, which in turn was the precursor to the mainland Japanese shamisen.  During the Ryukyu Kingdom period, the sanshin was played at court and in processions.  Over time, sanshins evolved from being elite items used by the samurai class into later being used by the general public.  The instrument is still an important part of Okinawan music.

Unlike the typical snakeskin covered sanshins, the two sanshins included in this study are not covered in snakeskin.  Therefore, the origins of their skin coverings were investigated by OIST biologists using mass spectroscopy techniques.  The skin covering both sanshins was determined to most likely be cowhide.  Identifying the type of skin will help us understand the way in which sanshins were previously made as well as further our understanding of the trade practices of past Okinawan people.

Past insect damage had eaten away areas on the surface of the leather covering, leaving distracting light patches.  Additionally, there was damage to the decorative textile band, deterioration of the lacquer coating, broken tuners, and detached strings. 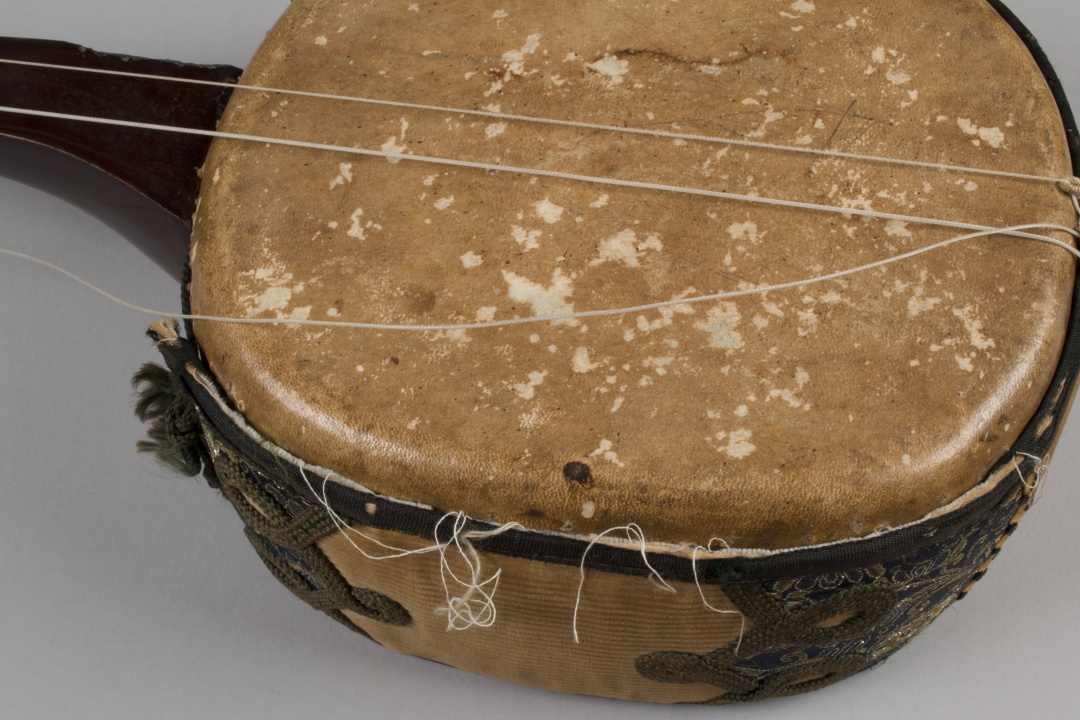 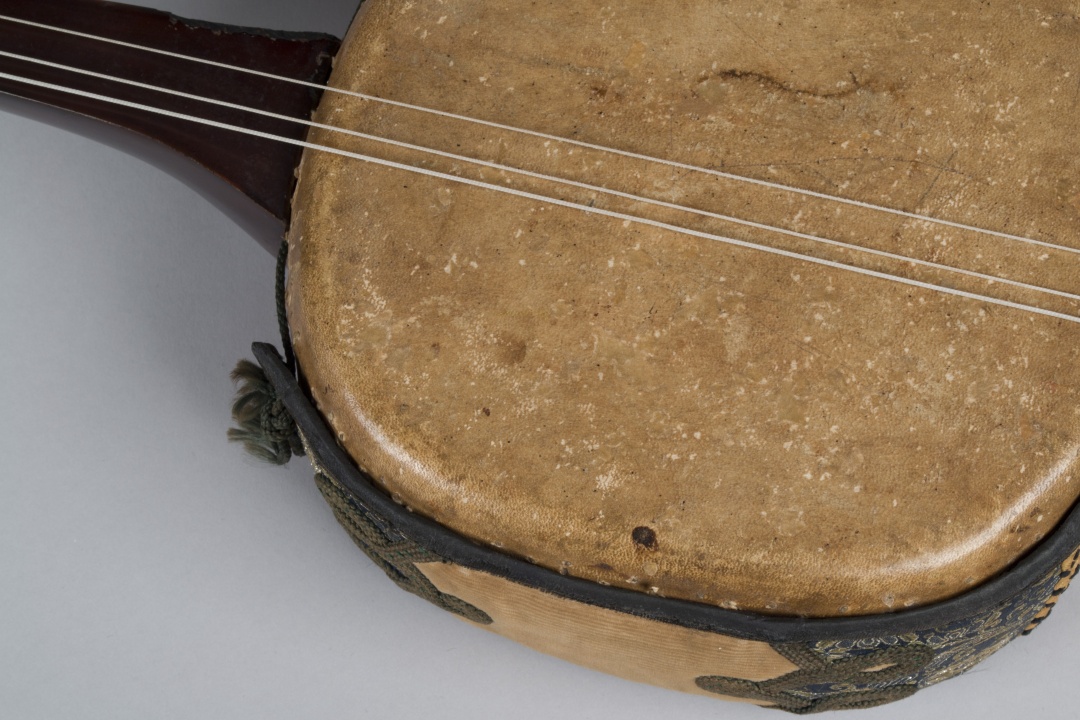 First, loose dirt and debris were carefully brushed and vacuumed away from the sanshin.  The lacquer surfaces were then cleaned using solvents and a specially formulated chelating solution.  Care was taken to ensure that the cleaning solutions did not adversely affect the lacquer surface.  Repairs were made to the leather covering and textiles using toned Japanese tissue.  Small losses in the lacquered neck were filled with acrylic spackle and toned with pigmented acrylic resins. Lastly, the broken tuners were also repaired and the strings were wrapped/tied in place.  An archival housing was also created for the sanshin.  After treatment, the sanshin is in stable condition.  Viewers can now appreciate the sanshin without being distracted by previous damages.

The lacquer coating the sanshin’s neck (sou) was actively flaking off and much of it was already missing.  The loss of the lacquer may be due to fluctuations in relative humidity as well as the difference in the expansion and contraction rates of the wood neck and the resinous coating.  Before treatment, scratches and abrasion to the leather covering were also present.  There is an old leather patch repair on the front of the "drum" (chiigaa), which was applied in the past to cover damage to the leather covering.  The textile decoration may be a newer replacement and not be original to the sanshin.  However, the textile still had some abrasion along its edges as well as staining. 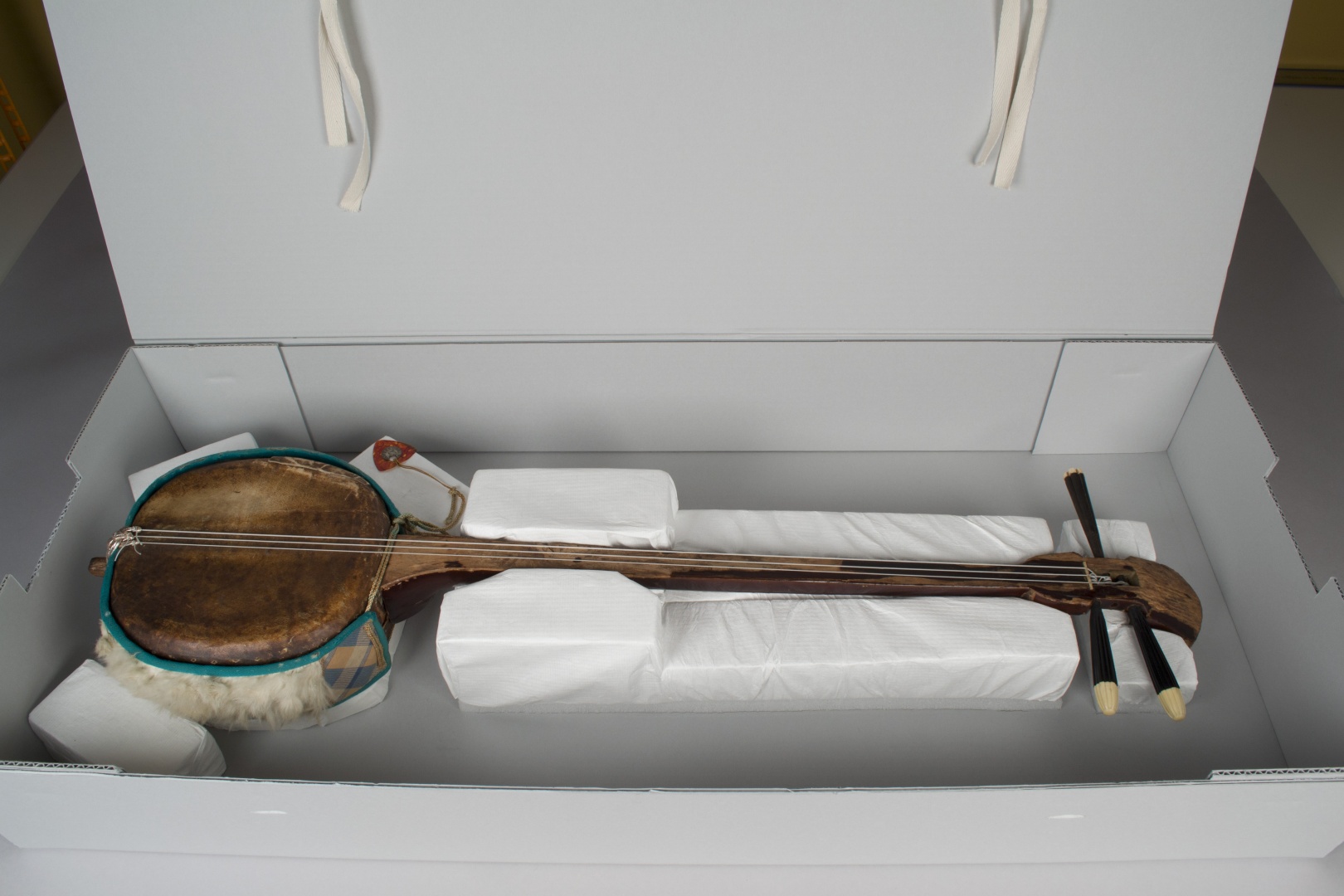 The goal of this treatment was to stabilize the condition of the sanshin.  The flaking lacquer on the sanshin's neck was gently humidified to help  relax it and then carefully consolidated using fish-based glue.  The fraying edges along the textile band were protected by covering them with a nylon netting overlay.  Toned Japanese tissue was used to visually integrate areas of loss on the leather covered drum.  The sanshin was cleaned overall and an archival storage housing was made.