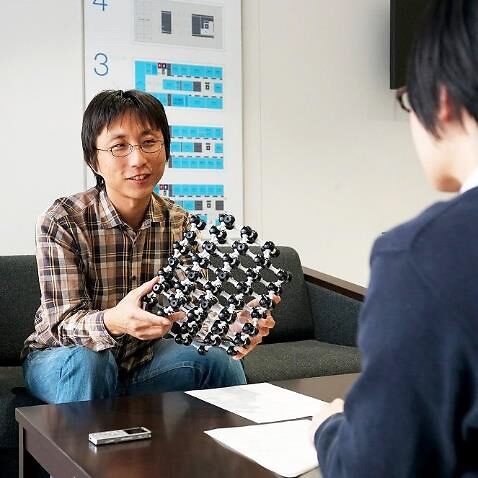 A nitrogen vacancy (NV) center in diamond is known as a solid-state spin quantum bit (qubit) at room temperature. The fabrication of scalable quantum registers based on NV center is a long-standing issue. In 2005, spin-spin interaction between NV-N pair, which was fabricated by N2 ion implantation, was reported [1]. An entanglement between two electron-spin qubits becomes excellent quantum information processing component, as accomplished by an NV-NV pair with a nanometer-scale distance in 2010 and 2013 [2-4]. More recently, strongly dipolar coupled NV-NV pair was realized by 14N+-30 keV implantation via nanoholes in PMMA resist mask [5]. The creation yields of NV-NV pair dramatically improved, and the nanohole implantation had been thought to be the most promising technique to integrate NV centers. However, the problem of the technique is finite size of nanohole. While the distribution of nitrogen atoms is determined by both ion straggling and nanohole diameter. The scaling of NV centers is stagnant up to two for several years.

To overcome the barrier of triple NV centers, our previous research gave a ground-breaking idea of highly populated NV center complex by introducing molecular ion implantation technique [6]. Since the molecular ion is regarded as an ideal point source, the distribution of nitrogen atoms is determined by only ion straggling. Therefore, our proposed method is more effective than other implantation techniques including the nanohole implantation. Instead of a pure nitrogen cluster which is commonly unstable, the stable organic molecular ions (adenine; C5N5H5) were utilized as ion source. We successfully implanted C5N4Hn ions into single crystalline diamond. Three NV centers were integrated, and the dipolar interactions among them were successfully observed. However, it remains to create NV center complex up to three. This is no doubt that further incrementation of NV center complex is capable to be accomplished by developing new beam of molecular ion which contains higher number of nitrogen atoms. In this talk, we will introduce the recent development of molecular ion beam.

As mentioned above, in 2019 we reported dipolar coupled triple NV centers created by C5N4Hn ion implantation [6]. In 2022, we first accomplished NV center integration over three by implanting phthalocyanine (C32N8H18) ions into single crystalline diamond [7]. When a phthalocyanine ion with the total energy of 284 keV collides with the diamond surface, it decomposes into individual atoms with energies of 7.7, 6.6, and 0.6 keV for nitrogen, carbon, and hydrogen atoms, respectively. The implanted atoms create vacancies along the trajectory and stop at positions determined by the straggle. After ion implantation, the sample was annealed at 1000°C for 2 hours in a vacuum to combine nitrogen atom with vacancy and recover the diamond lattice structure. Multiple NV centers were found as bright spots in laboratory built confocal microscopy (CFM) observation. We successfully found one, two, three, four and five NV centers in confocal spots. Since the distance between nitrogen atoms introduced by molecular ion implantation is calculated to be 9±4 nm, they are expected to have a strong dipolar coupling. In addition to CFM observation, we measured the optically detected magnetic resonance (ODMR) spectra. ODMR enable to identify the number of NV centers up to four, when all NV centers have different orientation axes. We clearly found four NV centers in a confocal spot, which shows eight dips in ODMR spectrum. Unfortunately, five NV centers cannot be identified, but this would soon be justified by introducing a local magnetic field gradient to ODMR, where NV centers with the same orientation can be identified.