The last project I worked on in the Milstein lab was supported with OIST funding, as I already had the job here and was waiting for the lab to be built. The old boss let me use the lab facilities back at the Weizmann in the meantime. In the year before I started it, Dipankar Srimani published a paper with Milstein on the olefination of alcohols with sulfone reagents, as in the Julia olefination reaction. However, the reactants were alcohols and not aldehydes, and the sulfone used was an unreactive one that would normally need a one electron reductant to eliminate under normal Julia olefination conditions. If the reaction was carried out in a closed system or under H2 gas, the product obtained was not the olefin, but the hydrogenated hydrocarbon. 1

A strong base was required to deprotonate the sulfone, while the dehydrogenated catalyst converted the alcohol in-situ to the aldehyde that was attacked by the anionic sulfone. Under the reaction conditions, elimination occurred directly from the intermediate to form the olefin in a trans-selective manner as in the Julia olefination reaction. The reaction reported was limited however, to benzylic alcohols, and hydrogen was required in order to form the alkane (using the same Ru catalyst).

Dipankar's reported reaction. Only the phenyl benzyl and pehenyl methyl sulfones were reported

Dipankar’s (here is his current outfit http://www.iitg.ac.in/dsrimani/) paper attracted a lot of interest and in our group meeting I said that it must be due to the fact that the intermediate aldehyde that is generated reacts faster with the deprotonated sulfone, than with another equivalent of alcohol to form the ester. I thought immediately that the concept would be more useful in Wittig couplings, which is a richer cousin of the Julia olefination of sorts. The Wittig coupling was discovered earlier; it is a lot easier to make Wittig salts as coupling reagents than sulfones; there is no need for a one electron reductant as an intermediate is not formed, and finally the reaction is Z selective when potassium is used, being very complimentary to the E selective Julia olefination. It’s no wonder that perhaps until very recently with the rise of Pd coupling chemistry, the Wittig coupling was one of the most common methods, if not the most common, of forming CC bonds in the pharma industry.

Comparison of the Wittig and Julia olefination reactions

The Wittig coupling, just like the Julia olefination, suffers from the drawback of requiring aldehydes or ketones. Aldehydes normally don’t store well, so these are usually made from the associated alcohols via oxidation with stoichiometric chromium reagents (at least in academia) and it is often a reaction that I used to run in the pheromone synthesis lab. While the starting chromium complex is an orange powder, at the end of the reaction there is a sticky black tar, from which the aldehyde has to be extracted. That tar often ends up on the top of your column and is a nightmare to clean, not to mention the chromium waste. However, applying the same concept of Ru dehydrogenation catalysis, we should be able to generate the aldehyde, and have it attacked by the deprotonated Wittig salt, the ylide, in order to generate the associated olefin. The reaction conditions of a strong base and high temperature (required for the dehydrogenation) are too harsh for the aldehyde, but if it is consumed as soon as it is generated, it should be fine. This concept is not new and was used in the ‘hydrogen borrowing chemistry’ of Williams, mostly done with iridium catalysts that can’t get rid of the hydrogen efficiently enough and end up hydrogenating the resulting olefin (https://en.wikipedia.org/wiki/Borrowing_hydrogen Unfortunately, Professor Williams who was based at Bath University recently passed away (August 2019) at the age of 55 and I don’t know how long his group website will last). The chemistry was also often done with stabilized ylides. For my idea to work, it would have to form olefins and not hydrogenate them afterwards, as these are more valuable products than alkanes and can be functionalized further, and the ylides used would have to be unstabilized, utilizing the full versatility of the Wittig reaction that I had done very often in undergraduate research. 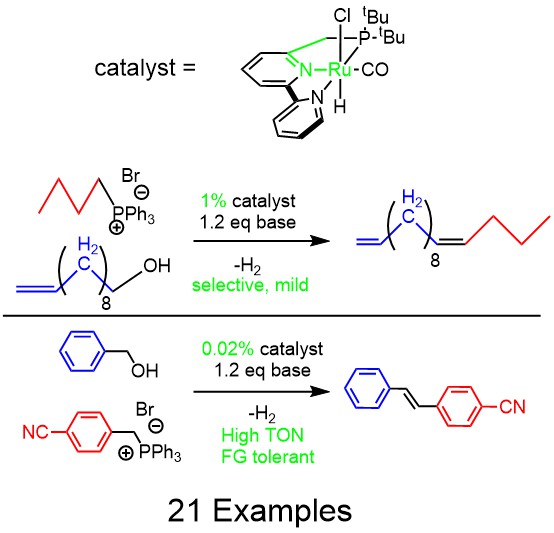 The idea worked and I was able to do the Wittig coupling with alcohols. 2 Potentially this could save a lot of money for the right process chemist as the oxidation step could be skipped. The drawbacks do include the high temperature of the reaction. Although the Wittig coupling with potassium base should be selective for the cis product, the high temperature causes the intermediates to equilibrate when the alcohol or the Wittig substituent are aromatic. However, in the case of an aliphatic alcohol and an aliphatic Wittig reagent, cis selectivity is obtained. The functional group selectivity is anything that is tolerant to high temperature or to your particular Ru catalyst. Not as good as the proper Wittig coupling, but reasonable (please see the paper for specific examples).

Later on there were a few groups who repeated the reaction with a different catalyst that had lower catalyst loading. However, even the Milstein catalyst used in my original report will work at much lower loading for benzylic alcohols, which were also used in the latter reports. Basically any dehydrogenation catalyst will work, and currently the cleanest ones that are most functionally group tolerant and don’t do anything funny to the ylide intermediate are Ru ones. The problem is when you’re working with an expensive substrate alcohol, and you decide to try 0.1 mol% of catalyst and end up with only 50% yield when a 0.5 mol% loading would have given you the same yield as if you just used an aldehyde. The MACHO Ru catalyst is commercially available and cheap, so there is no reason to try to save every milligram. For reaction optimization, this is a different matter of course. In light of that, the example below is from my recent collaboration with OIST neuroscientists, where they had me make the following dye. 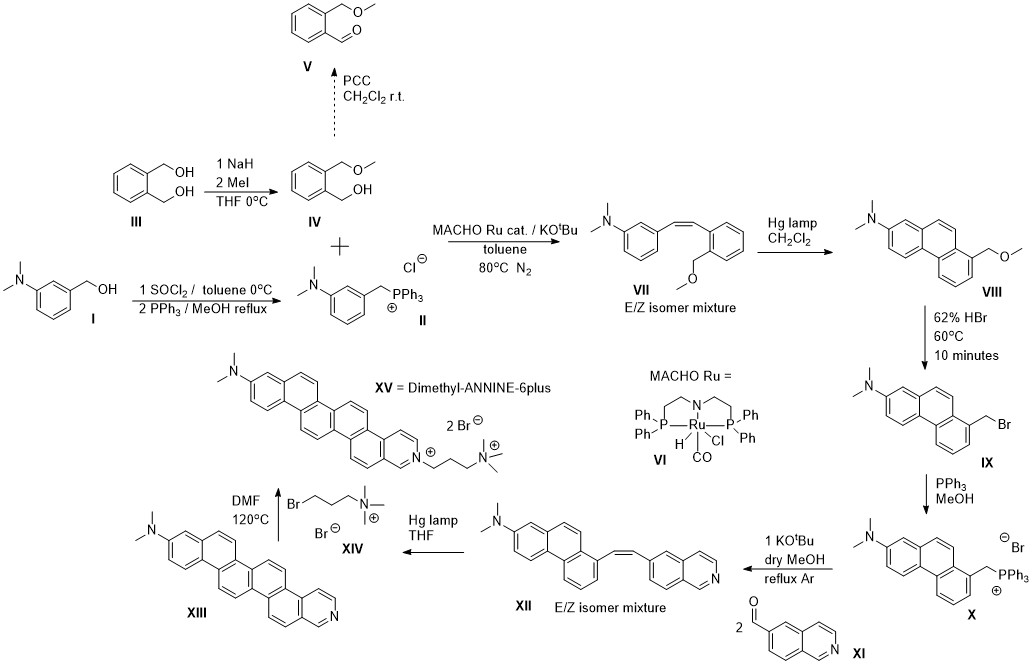 Another drawback of the original paper and the following reports is that the reaction was small scale and the reaction vessels (small Schlenk tubes) were loaded in the glove box, perhaps turning off potential users. In the scheme above, the catalytic reaction was used to react II and IV directly without first oxidizing it to the aldehyde with PCC. As the reaction was large scale (20-30 grams of the Wittig salt), it had to be done in an open system under nitrogen outside the glove box, so a three neck reaction flask connected to a nitrogen cylinder with a reflux condenser for the toluene. The catalyst is air stable until it is activated by base, so the required ~40mg or so were thrown in at the end after adding in all other components. There were some important things learned about the limitation of the reaction from this process, that involved loss of valuable starting material at least 2 or 3 times, until we finally got to the expected yield. This experience was very painful, but at the end very worthwhile. The first things is, don’t be stingy with the catalyst in case there are some small impurities there and use at least 0.2 mol% or even more. Speaking of the impurities, a lot of them are introduced during the synthesis of the Wittig salt if the salt is made in methanol and/or washed with a chlorinated solvent. Trace methanol will poison the catalyst as it's dehydrogenated to eventually form CO. If a chlorinated solvent was used to crash out the Wittig salt, then it’s hopeless. Some of it will be trapped and will kill your catalyst if you use less than 1 mol% (and at these loadings on large scale you will have to start worrying about cost, even though it will still be cheaper than stoichiometric PCC). The same goes for ethyl acetate. This solvent can react in the coupling reaction as it is a source of ethanol for the catalyst. At then end, you do get an 80% yield of VII if everything was done correctly, using traditional organic chemistry techniques and on decent scale. It is important to have clean reagents such as a clean alcohol, but it is of huge importance to wash the Wittig salt after its synthesis in methanol, with large amounts of toluene (non reactive solvent used for the catalytic coupling later), and rigorously dry it under high vacuum. It is also best to avoid using a hydroxylic solvent in the synthesis of the phosphonium salt (THF can work). Taking these precautions, you will save a day of work dealing with black, sticky slurries and running a huge column to separate your aldehyde. I really can’t go back to the traditional method of oxidation for the preparation of the Wittig coupling partner. If you are an organic chemist and you managed to read the entire text so far, you also owe it to yourself to try this reaction as well next time the Wittig coupling calls. If you're just reading this to waste time instead, the information contained under this rubric will be useful in one of the next sections. Please pay special attention to Dipankar's paper as we will revisit it in more detail there.