The unit pursues biology of evolutionary genomics and informatics with physics-based tools and concepts. In FY2014 these activities included studies of sequence duplication, directed evolution, and mutual information between populations of neurons in vitro.

Our unit's study of inter-genome and intra-genome sequence conservation has been comprehensively described in past annual reports. The algebraic distribution of duplicated sequence lengths for the non-repetitive [ i.e. repeat-masked ] natural genomes has been demonstrated by us and confirmed by the Arndt group at the Max Planck Institute for Evolutionary Genetics in Berlin, Germany, and both groups demonstrated models to account for the algebraic distribution. Among the important insights into the biology of sequence evolution that has emerged is that repetitive sequence does not conform to this distribution.

One of our principal conceptual and computational innovations in whole-genome characterization of sequence duplications is illustrated here by a popular quotation often misattributed to Gandhi, selected solely for its repetitive character:

*Miller and co-workers; SEQANALYSIS [TM]. Observe that this classification of substrings counts each location in the genome no more than once.

**Arndt and co-workers [MA]; MUMMER and all other software of which we are aware that predates our work. Observe that this classification of substrings may count a single location in the genome multiple times. In this sense this counting is redundant, in effect integrating over longer substrings.

Subsequently many standard software packages, including MUMMER, were modified by their authors to better account for local maxmers in one way or another. User must take care with options on all versions of all software.

In most natural genome sequences, for long substrings, it is an empirical fact that supermaxmers dominate so that * and ** don’t differ that much; however, short substrings are another matter: ** and * diverge from one another strongly. The ** counting yields a total number of nucleotides that exceeds the length of the [ repeat-masked ] genome because in practice it counts each location in the genome multiple times.

The differences in counting quantitatively explain the discrepancies in length distribution for short substrings reported by Massip and Arndt [MA] and by Koroteev and Miller [KM]. The new length scale (“short” versus “long”) is reflected in natural sequence data and in the additional term that arises in the dynamical equations of KM and that is absent from MA. This additional term of KM accounts for annihilation of supermaxmers that does not conserve total substring length, because a large part of a substring can be destroyed.

The two ways of counting can be reconciled within an overarching framework by describing  occurrences of a local maxmer as "nested [within a supermaxmer]" and occurrences of a local maxmer outside any supermaxmer as "non-nested." Nesting is thus a context dependent property. The suffix array based software, SEQANALYSIS, reports on a whole-genome scale the numbers, nesting, and locations of maxmers and their parents as a tool to study the evolution of duplicated sequence.

Dr. Zdneke Lajbner continued his characterization of the haplotypes of fruitflies that he bred in our laboratory under controlled thermal selection, in collaboration with the Dowling laboratory at Monash University. The original progenitor fly lines were obtained from the extremes of temperature on the Eastern coast of Australia. 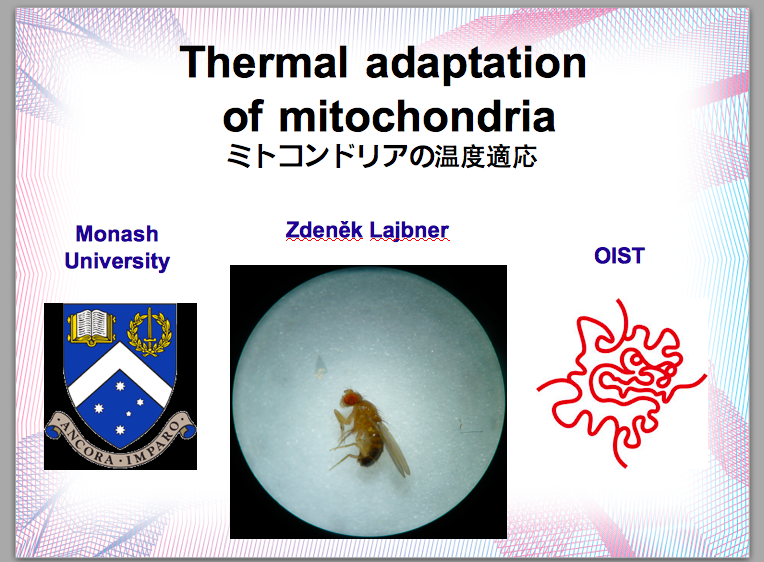 His experimental protocol is indicated below: 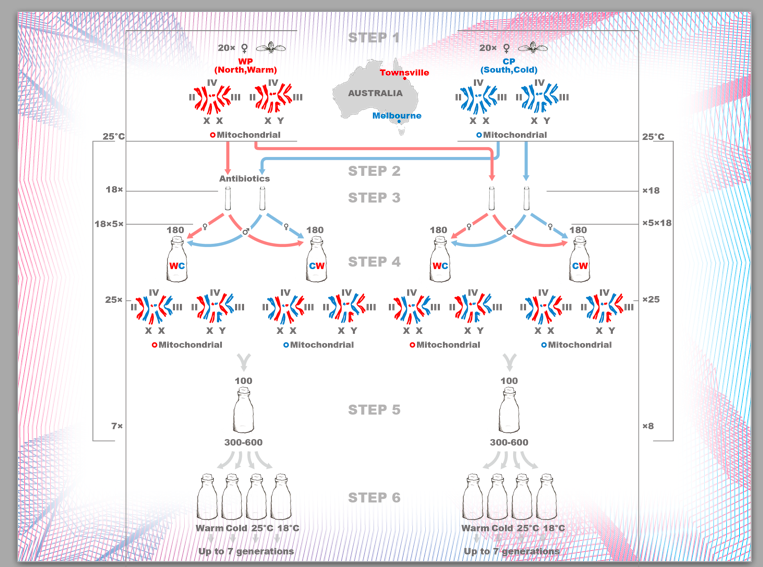 In a challenging and technically difficult experiment, our collaborators in the Arbuthnott laboratory at OIST cultured populations of striatal neurons and of cortical neurons on opposite ends of a multi-electrode plate, and then removed a barrier between the two populations to allow them form connections with one another as they do in vivo. The acid test was to sever any connections by cutting across the middle of the plate with a knife. A photograph of a plate, with thirty electrodes in the top half (cortical cells) and thirty electrodes in the bottom half (striatal cells) is shown below; blue represents a recording of the potentials from the corresponding electrode as a function of time. 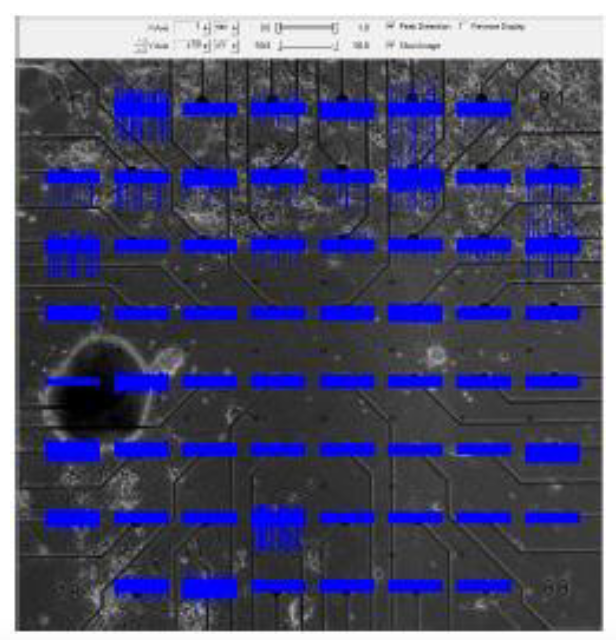 Some of the steps of Dr. Pnini's analysis of these data are indicated in the figures below. 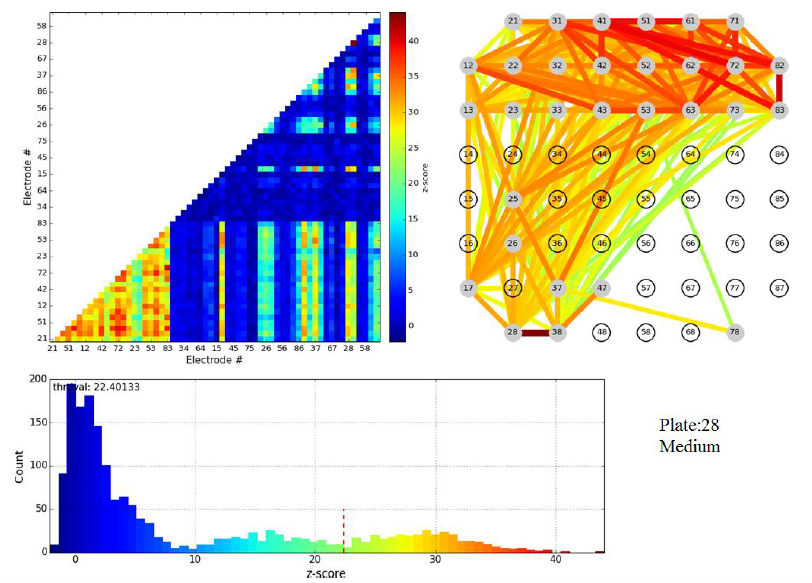 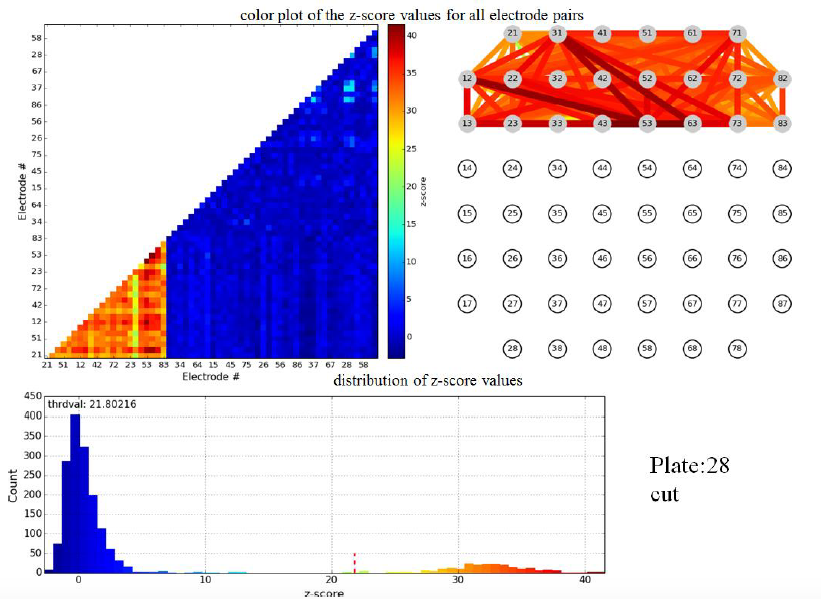 Figure 3.2: z-scores for pairwise electrode mutual information in same plate as figure 3.1, but directly after cut.

Evidently the cut wipes out the pairwise mutual information between cortical and striatal electrodes, validating the formation of active connections between these populations in vitro. We stress that the principal scientific advance described in this subsection of Activities and Findings is the experimental achievement of active connections in vitro between cortical and striatal neurons by the Arbuthnott lab. Nevertheless, Dr. Pnini and Dr. Taillefer overcame significant challenges in signal processing to develop and implement a straightforward, unassailable, and - just as important - simple computational pipeline to exhibit the activity of the neural connections from the multi-electrode recordings.