Our Unit is committed to the study of brain neuroanatomical, electrophysiological, and behavioural alterations that accompany the loss of the neurotransmitter dopamine in animal models of Parkinson’s disease. In the period between April 2015-2016 thanks to their continuous hard work, commitment and creativity, two postdoctoral scholars from our Unit left to continue their successful scientific careers. Dr. Violeta Gisselle Lopez Huerta was the first to leave to The Broad Institute of MIT and Harvard, followed by Dr. Omar Jáidar who is now at the University of Stanford, School of Medicine, Neurosurgery. We are still keeping in close communication with both of them to finish pending manuscripts. We have seen the arrival of two postdoctoral scholars, Dr. Teresa Hernandez Flores and Dr. Emmanuelle Sandrine Albert. They have started challenging single cell recording experiments and neuronal calcium imaging in CRE animals expressing various viruses. Ms. Yoko Nakano our research technician, continues supporting our group’s productivity, especially in immunohistochemistry and production of viral vectors as well as genotyping the transgenic animal colonies. Dr. Marianela Garcia Munoz, our senior group leader, manages and supervises the research team, more so now that Prof. Arbuthnott, the head of the Unit, was appointed Dean of Faculty Affairs. She directly works with neuronal cultures and oversees research projects and publications. She is not only an experienced advisor for postdoctoral scholars, but also a leader for our graduate students: Nilupaer Abudukeyoumu and Bianca Sieveritz. From their first day, these students have worked remarkably hard. They are learning to be scientists who constantly explore and discuss the literature, propose creative ideas and perform very high standard experimental work with excellent self-demanding quality control.  Resulting from a collaboration with Dr. Luoise Parr-Brownlie of the University of Otago, New Zealand (see bellow), Ms. Nikki Guy successfully finished almost a year-long research collaboration; returned to New Zealand and obtained her master’s degree there. Ms. Rebecca Yang as an intern in the Unit, learned how to handle and train mice in a 5-choice serial reaction time. The purpose of her work was to explore previous casual observations that not all mice from Dadr1, Dadr2 and C57BL/6J strains learned the task equally. Indeed, she observed that learning and performance were worst in Dadr2 mice, however, we estimate that training for a much longer period should be performed before publishing any results.

We were pleased to see our previous postdoctoral fellows mature to become bright independent scientists. With our two newly arrived postdoctoral scholars, we are now embarking onto a new scientific adventure to further clarify alterations in motor cortex resulting from dopamine depletions in animal models of Parkinson disease.

Teresa Hernandez is exploring and refining previous findings from her predecessors and proposing interesting hypothesis about thalamo-cortical motor function. During his last project at OIST, Omar Jáidar observed in collaboration with Prof. Bernd Kuhn (Optical Neuroimaging Unit), that viral injections in motor thalamus allowed identification of active terminal axon fibres and varicosities in layer 1 of frontal cortical areas. Now, Teresa Hernandez is focusing on activity changes in all layers of motor cortex (Figures 1 and 2). She is doing calcium imaging combined with patch-clamp recordings. 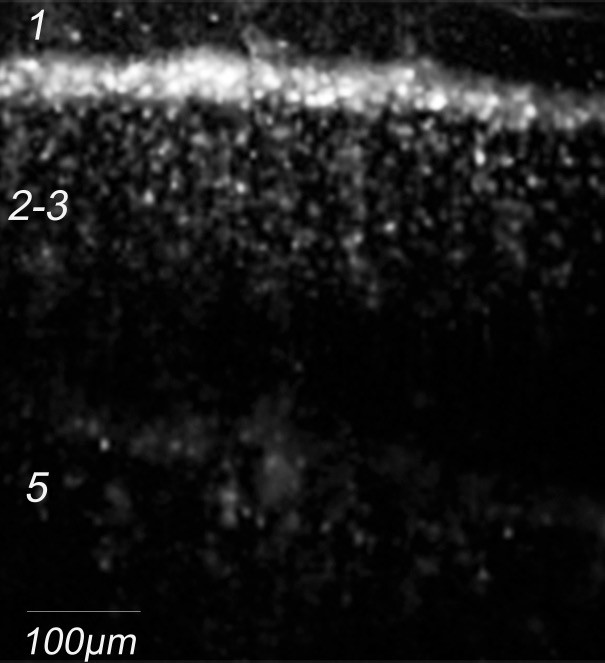 Figure 1: Sagittal section of the motor cortex of a C57BL/6J mouse expressing the ultra-sensitive green fluorescent genetically encoded calcium indicator (GCaMP6f) two weeks after stereotaxic injection of AAV-1- GCaMP6f. The approximate location of cortical layers 1, 2-3 and 5 is indicated on the left. 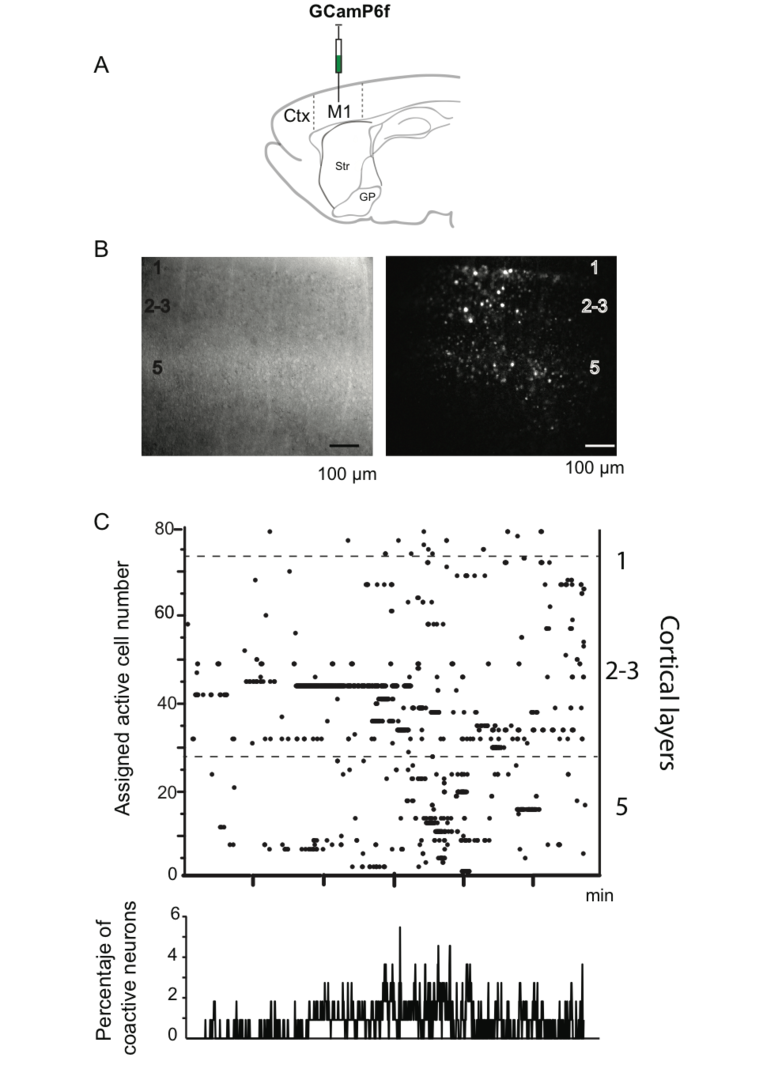 Sandrine Albert has devoted her attention to specific activity changes in synaptic varicosities of layer 1 (Figures 3 and 4). She is transferring her expertise on retina ganglion cells to the delicate recordings in layer 1.  In general, she would like to focus on the role of layer 1 as a driving force and regulatory entity of pyramidal cell excitability in motor cortex and determine if layer 1 provides a restricted, wide-range or both types of influence on cortical activity. 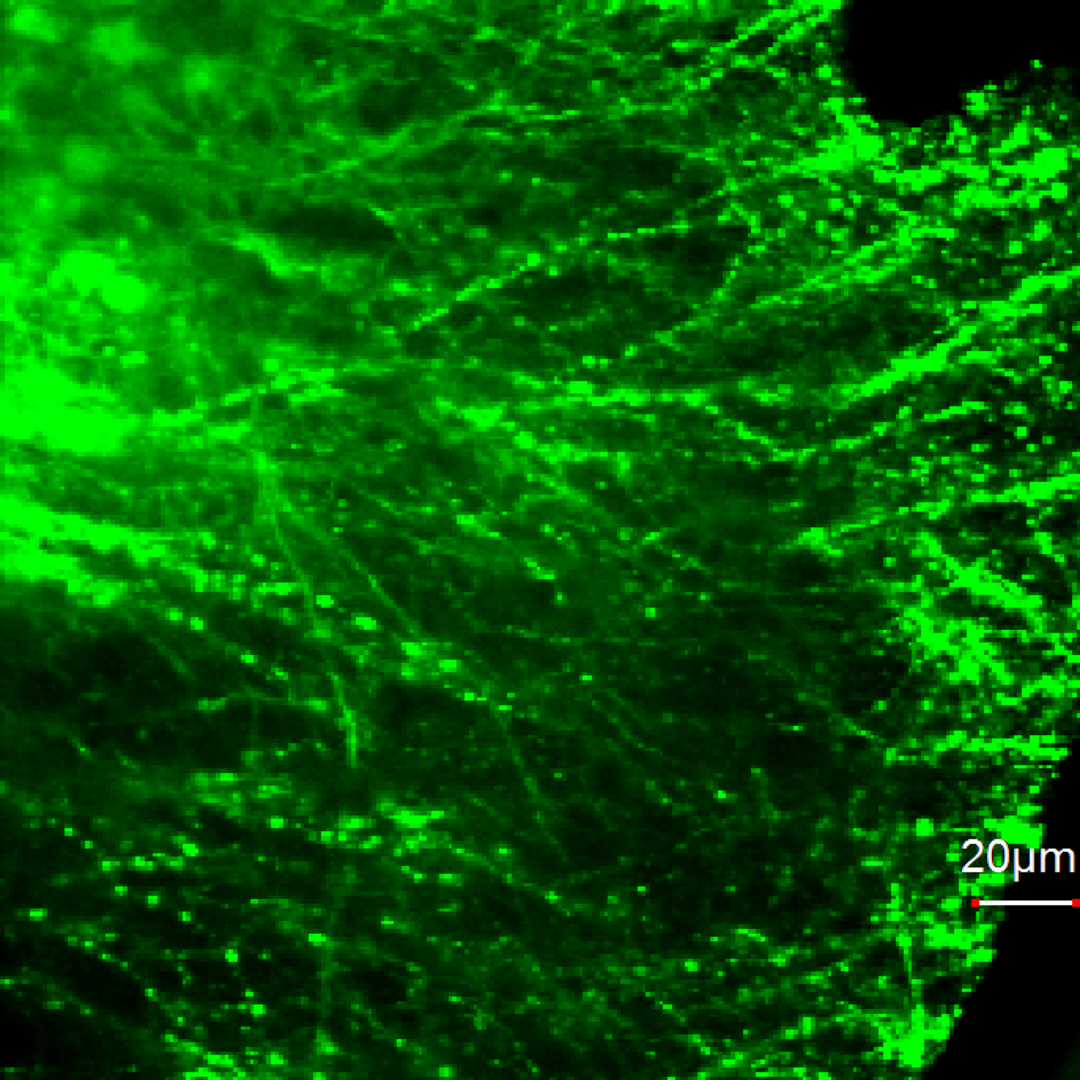 Figure 4. Challenging recordings of axons and varicosities in cortical layer 1. Left, low magnification image of axons and terminals. Visualization of fine processes for electrode placement, required that the initial image (left) be further magnified 8 more times (60X 8). Traces on the right are loose patch records of boutons (a) and axons (b).

6.1 The pathophysiological signatures of functional connectomics in the striatal microcircuit.